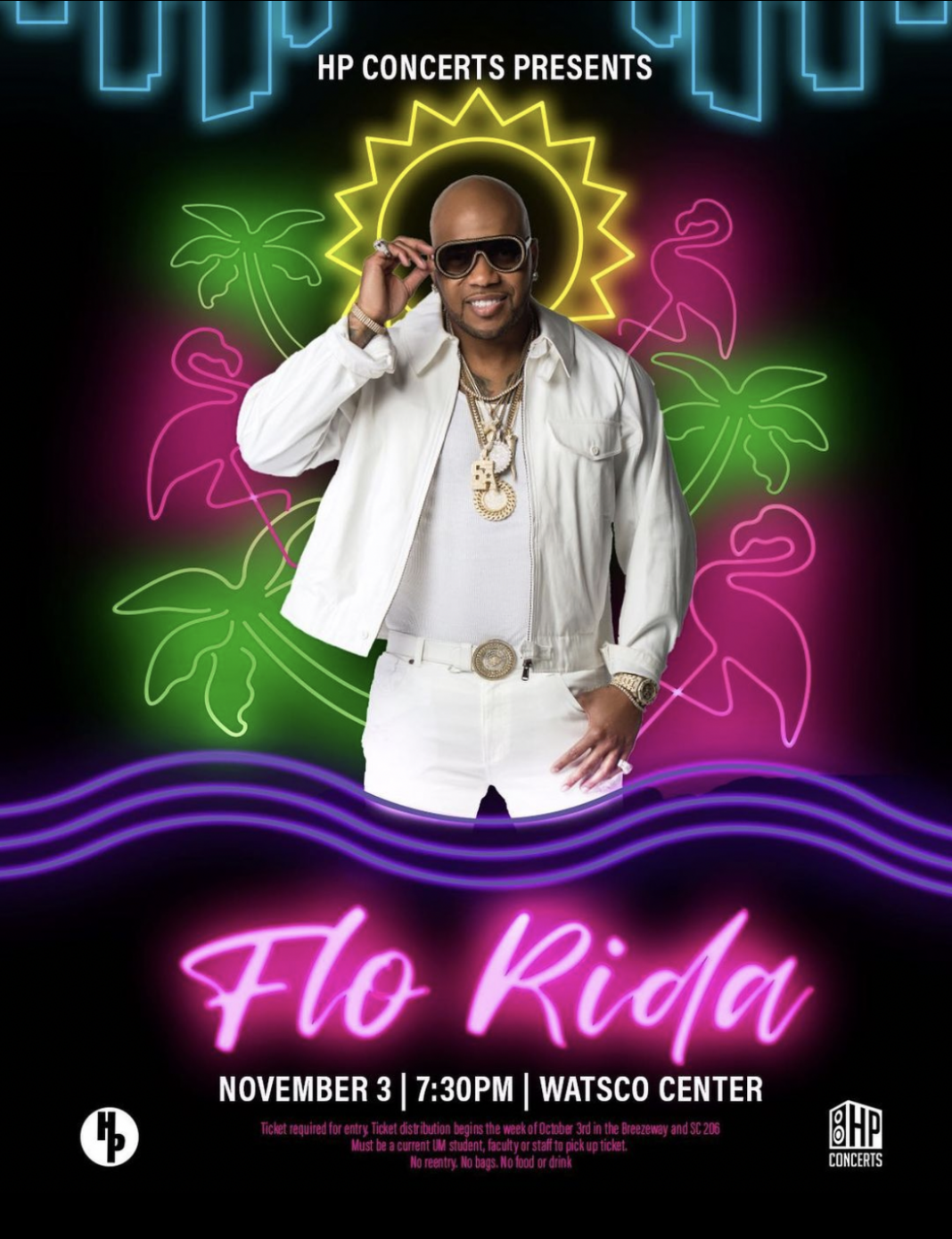 Like Miller, UM students reacted with excitement to the announcement of 2022 Homecoming concert headliner, Flo Rida.

“Incase you haven’t heard… FLO RIDA IS COMING TO UMIAMI to perform for our homecoming concert November 3rd in Watsco!!,” the HP caption said.

Tramar Dillard, commonly known as Flo Rida, is an American singer and rapper known for breakouts like “Low” featuring T-Pain, which broke the record for digital download sales at its release. Other hit singles such as “Good Feeling”, “G.D.F.R.” and “My House” made Flo Rida an international best selling artist.

The live-music event continues HP Concerts’ return to regular programming and will be the first homecoming performance since 2019 with 21 Savage. Early this year, rap duo Rae Sremmurd performed in the Watsco Center for the spring concert, the first in-person event since then.

Vama Shah, a sophomore biology major, plans on seeing Flo Rida perform and spoke about why he’s a great pick to bring to the U.

“I think he’s a solid choice because I feel like everyone has at least heard a [Flo Rida] song once in their life and it’s a vibe,” Shah said. “I feel like last years’ [Rae Sremmurd] were kind of niche and not a lot of people knew a lot of their songs, but I know Flo Rida is more popular in that sense.”

Zach Ng, a senior majoring in real estate, is just glad to go back to regular in-person festivities before he graduates.

“I’m not a huge music guy, but if you consider the last three homecoming performances, I would say I’m most excited for him,” Ng said. “It’s great — especially for my last year on campus — to have a full return of things we used to do almost 4 years ago.”

Others, including sophomore Hadi Dalao, are more indifferent about the choice of performer.

“I think it’s a good move,” Dalao said. “[But] it would be nice to bring more prevalent artists, more people that are going to create excitement that says ’Oh yeah, I’m glad to be here’.”

Bella Haham, a sophomore majoring in neuroscience, echoed these sentiments.

“I feel like the school could’ve probably chosen someone more interesting, more influential in this day and age. I feel like he’s not going to get that much hype from the school so he might’ve been a wrong choice,” Haham said.

For HP Concerts Chair Grace Altidor, a senior majoring in health sciences, choosing who to bring to the U is no easy feat.

“It’s a hard process because you can’t please everyone. We do try to bring someone who the wider population of the student body would be interested in,” Altidor said. “Some of the points we’ve had in selecting the artist this semester were someone who loves Miami and someone who would just curate the vibe where friends could gather together and feel happy and have a good time.”

As we say farewell to social distancing, HP Concerts is returning to the full concert experience. For the Flo Rida event, floor access will be reopened to students. Some lucky giveaway winners will also be able to win suite tickets.

In the end, Altidor and her HP Concerts team hope that students will have a fun time.

“I hope the students leave with a feeling of ‘Hey, I didn’t know who was standing around me on the floor, but we definitely all just had a good time and had the same awesome vibe,” Altidor said.

Flo Rida will perform at the Watsco Center on Nov 3rd, 7:30 p.m. Follow HP Concerts on Instagram @hp_concerts for updates about tickets, giveaways and more.