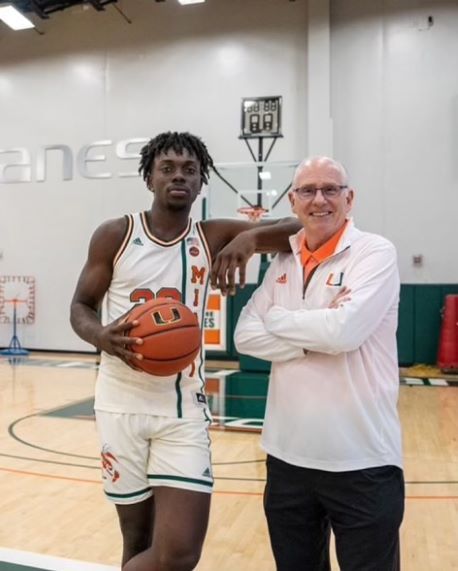 Four-star center Michael Nwoko committed to the Miami men’s basketball team on Thursday, making him the team’s first commit of the 2023 cycle. Nwoko is the 107th-ranked player in his class and the 13th-best center, according to the 247sports composite rankings.

“It just felt like home,” Nwoko said during his announcement video on 247 Sports.

Nwoko is a 6-foot-9, 240-pound player originally from Burlington, N.C. He attends Prolific Prep in California, which developed current NBA players such as Jalen Green and Gary Trent Jr.

His toughness, physicality and ability to run the floor could make him a valuable player on both sides of the ball. He possesses a soft touch in the paint and excellent defensive instincts. The center is also an excellent ball screen roller and a dangerous lob threat.

“Michael is extremely deserving of his commitment to Miami. His rate of improvement in the last 15 months has been phenomenal,” Prolific Prep head coach Ryan Bernardi said to All Hurricanes.

Nwoko chose Miami over 23 other schools, including Georgia Tech, Providence, UCLA and Vanderbilt.

Miami is expecting to lose star guards Isaiah Wong and Nijel Pack to the NBA draft after this season, along with Jordan Miller. The ‘Canes are looking to build for the future and signing Nwoko will likely improve their frontcourt.