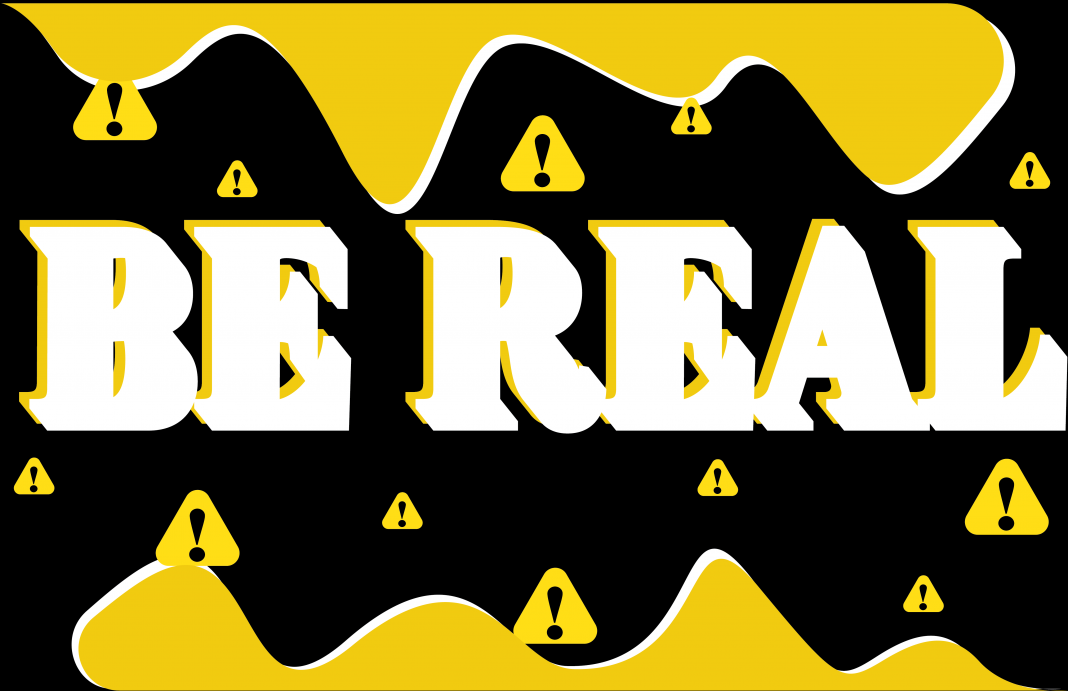 BeReal is a new social media platform that capitalizes on being everything that Instagram isn’t.

While Instagram has become notorious for its highly-curated content and negative impact on teen mental health, BeReal comes as a refreshing alternative. But with social media sites advertising themselves as genuine representations of life, it’s important to take a step back and remember that nothing online will accurately reflect real life.

BeReal was first launched in 2019 but spiked in popularity within the last few months.

According to Apptopia, of the total 43.3 million downloads since BeReal’s launch, 41 million were this calendar year. When the daily notification appears — the time varies each day — users have two minutes to take and upload a photo showing their current situation captured by both the front and back camera.

“I think it’s important for people to realize what you’re putting out on social media isn’t that big of a deal and BeReal emphasizes spontaneity,” junior Maggie Barrow said.

The moment takes on an urgency. At the moment of notification, it’s not uncommon for people to drop everything and post a picture before time runs out.

Bereal advertises itself as “not another social network” — an authentic form of social media where you can share your real life with close friends. This is a well-packaged way of saying that most of the time spent on the app is scrolling through pictures of your friends doing mundane activities like laying in bed or working.

However, don’t let the app’s claim to authenticity fool you: BeReal is still a social media platform where users can quickly veer into the slippery slope of comparisons. In the same vein as the “natural makeup” look, users go through a certain level of curation to prove that they haven’t curated a thing.

Even with the app’s air of nonchalance, there’s a drive to frame your life as fun or interesting, even to your close friends. Users even have the opportunity to publicly react and comment on posts, providing the same incentives to maximize your content — a practice common on other popular social media sites.

While the app discourages late posts by notifying friends if you don’t post within the allotted two minutes, the threat is not taken seriously. People sometimes “save” their BeReal in order to portray a more interesting part of their day. In the eyes of most BeRealers, the threat of appearing uninteresting is far higher stakes than posting late.

Of the 40 friends I have on the app, most days only about a quarter of them post on time. The rest of the posts filter in throughout the day.

“I feel like the creators’ goal was for people to not obsess over social media and be spontaneous,” Barrow said. “But they have people obsessing in a new way, waiting around for the notification or planning around it.”

Even when people do post on time, they often scramble to look presentable and go through a series of poses to get the best shot. These days, it feels like we have an innate sense to self-filter to appear as attractive or happy as we possibly can.

BeReal encompasses the two types of online comparison that affect self-worth and adversely fuel one another. Users are caught in a harrowing cycle where they experience the intense validation of posting their highlights for others to see and the crushing insecurity of mindlessly scrolling through other people’s highlights. A cycle where posting a BeReal while out with friends provides just enough of a high to get through the lows of laying in bed watching everyone else’s fun-filled photos.

I downloaded BeReal last spring during finals week but didn’t keep up with it because nearly all of my posts featured me in front of my computer screen. But when summer came around, I was posting every day.

Still, BeReal’s style and content is still a refreshing break from the highly curated content on other platforms. It’s reminiscent of what other social media platforms used to be — no image to maintain, less thought behind posts and no news or political content.

But as the app grows, it has the potential to assimilate to the structure of other social media apps like Instagram or Facebook. After all, the social media apps we condone for distorting reality and harming our well-being today also started out as ways to connect with friends online. With BeReal, as users add more friends outside of their social circles, they are bound to filter their posts more and more.

The key is to take everything you consume on social media with a grain of salt. Despite its title, BeReal is not real life and it is naive to assume otherwise.

Pari Walter is the opinion editor and a junior studying journalism and ecosystem science and policy.