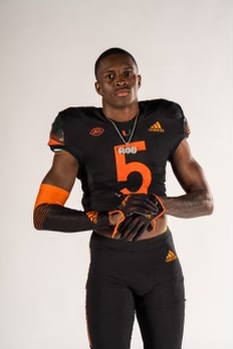 The Miami Hurricanes added yet another recruit in the 2023 class on Thursday afternoon, as four-star ATH Robert Stafford announced his commitment to the Canes on a 247Sports YouTube livestream.

“It’s a real dynasty over there,” Stafford said on the livestream. “My play style, everything I do, [fits with] the Miami Hurricanes … I feel like coach [Mario] Cristobal is doing something special over there.”

Stafford is ranked as the 12th-best ATH in the country, according to 247Sports, and the 196th best overall player.

Though Stafford has experience on both sides of the field, he is expected to play cornerback for Miami, and his relationship with secondary coach Jahmile Addae heavily influenced his decision.

“Me and [Addae] just clicked,” Stafford said. “I just love coach Addae, everything about him.”

The Melbourne, Fla., native began his football career at his local high school, Eau Gallie, as a wide receiver, where he caught 12 passes for 199 yards and 2 touchdowns in 2020. As a junior, Stafford started getting reps on defense and became a two-way player. This past season, he had 605 receiving yards and five touchdowns on offense while recording 17 tackles, five PBU and an interception on defense in nine games.

A multi-sport athlete who also excels in basketball and track, the 5-foot-11, 171-pound rising senior is one of the most athletic and versatile players out there, with a 4.50 second 40-yard dash and a 34-inch vertical jump.

He had 40+ offers and chose Miami over Arkansas, Kentucky, Oregon and Georgia.