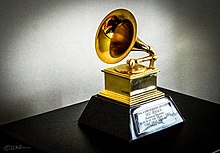 I would like to thank the Academy for confirming my biggest suspicion about this year’s Grammys. Everything was planned for Silk Sonic to win, but Bruno Mars and Anderson Paak releasing after the eligibility window ruined the Academy’s plans.

Every other nominee in the big three was a decoy to please the crowd, reward a few academy favorites and see if Kanye West will do something stupid involving Taylor Swift again, but the window shut and the preselected Album of The Year wasn’t an option.

The most interesting aspect of this year’s awards show was just how eclectic the Academy’s decision-making was. Instead of their usual methodical selections to make sure their most important winners rack up as many wins as possible, having no predetermined album of the year winner clearly sent them spiraling.

None of these outcomes are surprising, but the Academy should be careful as they probably only have one more bait-and-switch left with BTS in the Best Pop Duo category before the committee starts getting doxxed.

It wasn’t all bad from our overlords on the committee — they at least got the rap category correct! Both West and Tyler, the Creator weren’t available to accept their awards, but at least Baby Keem was. Silver linings.

If you were watching with hopes that the Grammys would descend into some Oscars-level anarchy, you probably aren’t too familiar with Grammys. The show boringly powered through its awards, making sure it never stops long enough to let the audience feel like they’re seeing something new, just a family friendly version of a music video getting less views than it did on YouTube.

But the Grammys have bigger concerns than their plummeting ratings. The “biggest night in music” seems to be losing its sway among the musicians it can’t live without.

While Foo Fighters certainly have more pressing issues going on following drummer Taylor Hawkins’ passing than being paraded around at an award show, the band was not the only award-winner to not make the show.

Nas showed up to play the classics, but without Kendrick Lamar to do his half of “Family Ties,” Baby Keem was simply there to accept his award. Tyler and Kanye — the latter of whom was banned or potentially had a personal breakthrough — both were unavailable to accept their winnings, and big-name nominees like Swift, Cardi B and Ariana Grande also didn’t show. Drake also withdrew his music from being nominated last year.

Forgiving the last-minute Kanye banishment and Foo Fighters withdrawal, there were six performances of note, and even those were forgettable besides Lil Nas X and Jack Harlow. Each of the six was packed in early and the show closed with Academy favorites and an incomprehensible amount of country.

If music’s biggest stars continue to decide that the Grammys have little to offer them, then there is no future for the award show.

Before the plug gets pulled for them, the Academy has to do some massive replanning to salvage things. First and foremost, someone has to make a decision about who the hell this is supposed to appeal to?

Who is this strange human being that is equally interested in Trevor Noah’s lame jokes, watching Nas X and Harlow swing a mic between their legs like a you-know-what, seeing the star of many terrible movies Jared Leto give Rodrigo an award and thinks Jon Batiste is the most important person in music? And more importantly, can I meet them?

Over the past few years, the Academy developed a bad habit of using popular artists in pop and rap for views while making sure they rarely win beyond their genre. This year’s ceremony morphed into an outright bizarre distribution of awards, closer to giving out participation trophies to make sure as many people as possible were happy — leaving everyone dissatisfied.

The Academy needs to make a decision and choose if they want this to actually reward the best music of the year, or become a more prestigious fan event.

If the academy believes in their heart of hearts that Batiste released the album of the year, why did Jazmine Sullivan beat him for Best R&B Album? Stan Twitter already doesn’t have the best understanding of the whole award show thing if it goes any deeper beyond their faves winning, but you do yourself no favors by giving huge awards to artists you don’t support throughout the ceremony.

No major artists have promised boycotts and no one was smacked but at this point, the Grammys might just take the controversy.