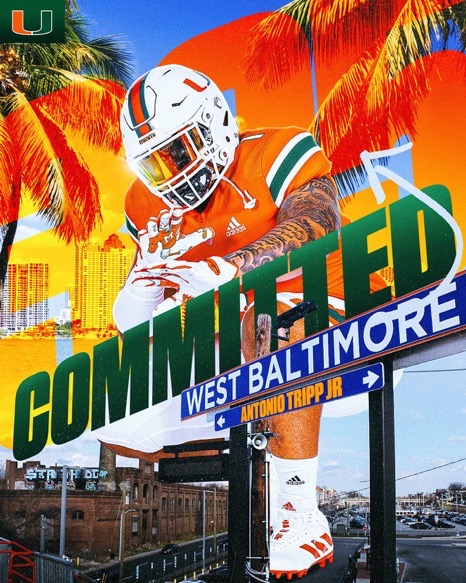 “This whole thing shut down. 171% committed to THE University of Miami,” Tripp wrote in a Twitter post.

Tripp hails from McDonogh High School in Owings Mills, Maryland, and is set to graduate in the class of 2023.

On Monday, Tripp was on the sidelines at Greentree Practice Fields on Miami’s campus watching Mario Cristobal’s first practice as head coach of the Hurricanes.

Tripp weighs in at 300 pounds and stands at 6-foot-3. According to 247Sports Composite, he is the 19th-ranked interior offensive lineman in the country and the seventh-best recruit from Maryland.

Tripp is one of Miami’s highest-ranked commitments since Cristobal’s arrival in December, and the team is hoping to make him one of many more as spring football serves as an opportunity to grow the recruiting class. The same day that Tripp committed to UM, five-star defensive lineman David Hicks rounded out his visit to Miami.

UM will resume spring practices on Wednesday ahead of the annual spring football game on April 16 in Fort Lauderdale.