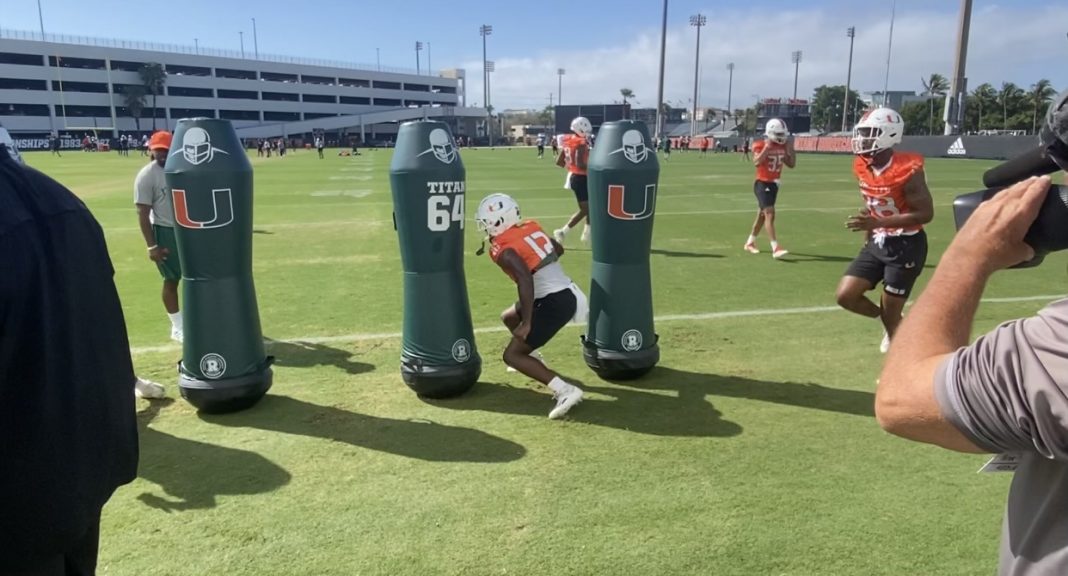 After an offseason sparked by an alteration in leadership and an abundance of coaching changes, Miami football’s spring practices are finally here.

Both Frierson and sophomore Chase Smith, who were both listed as strikers on last season’s 2021-22 football roster, were logged as linebackers on Miami’s 2022 spring roster. While the responsibilities of a striker are similar to those of a linebacker, both players will be playing a position that is different from the one for which they were recruited.

Smith, who played as a wide receiver, linebacker and safety at the high school level, was recruited as an athlete, while Frierson was brought in and initially fit in as a cornerback.

Williams, who appeared in nine games for the Hurricanes last season as a freshman, recorded an interception in the media-viewing portion of practice.

The rising sophomore had 31 tackles, two interceptions and two passes defended last year for the Canes.

The rising 6-foot-4 freshman signal-caller showed off his arm talent in Miami’s first spring football practice, slinging crisp passes around the field during the media-viewing portions on Greentree Practice Fields.

Brown, who was ranked as the 254th best player nationally and the 17th best field general in the country in the class of 2022 according to 247Sports Composite, was the only quarterback signee in Miami’s most recent recruiting class.

Without question, the last weeks of winter could not have ended soon enough for players to get to work with the new leaders of UM football.

“He tries to better us men [both] on the field and off the field,” Frierson said. “He’s a player’s coach.”

“We’re glad he’s here,” Van Dyke said. “He has an impact on the field and in the weight room.”

“He’s making us work,” Harvey said. “We had a great offseason. I see an improvement in all of the guys.”

Restrepo was one of the more impressive wide receivers during position drills, as he was sharply and efficiently breaking off his route stems throughout.