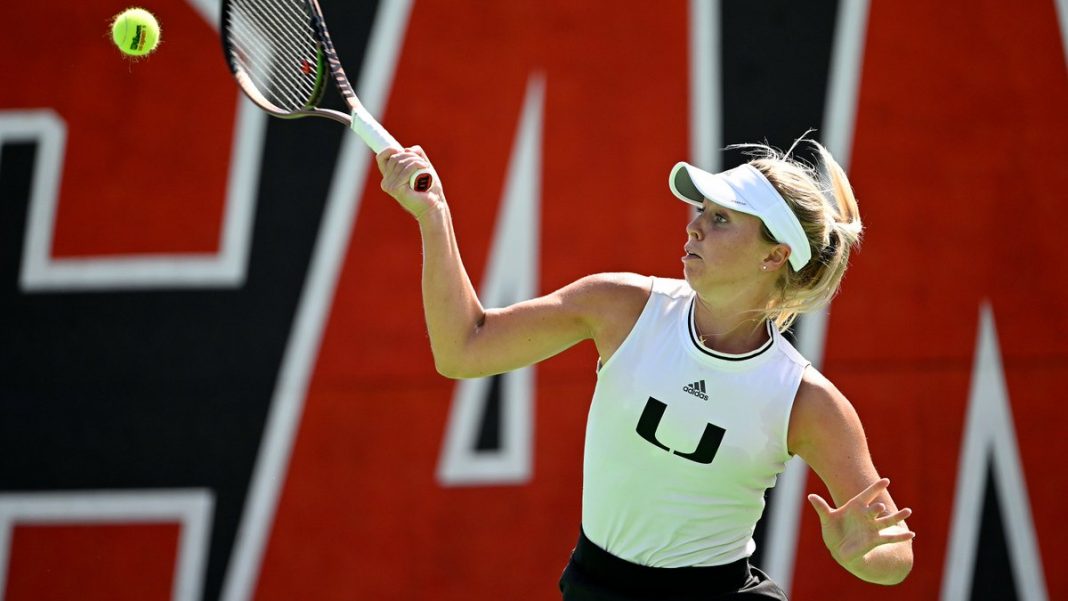 A week ago, she appeared frustrated after blowing a one-set lead against Georgia Tech’s top-ranked player.

But, with the score tied at 3-3 against No. 15 Wake Forest in Winston-Salem, North Carolina, Richardson remained poised, defeating No. 44 Anna Campana to give the Hurricanes their sixth straight win and third victory over a top-20 opponent this season. With Friday night’s triumph, No. 14 Miami (8-1, 3-0 ACC) improves to 23-1 all-time against the Demon Deacons (8-4, 0-1 ACC), whom they have not lost to since 2004.

“We played ball tonight. The conditions and being on the road didn’t seem to faze us,” Miami head coach Paige Yaroshuk-Tews said. “We stayed coachable and fought our tails off. I’m proud of this crew.”

On Court 1, it seemed Miami’s No. 40-ranked pair of Richardson and fourth-year junior Daevenia Achong were destined for victory after jumping out to a 5-2 lead. However, Wake Forest’s No. 6-ranked duo of Anna Brylin and Brooke Killingsworth closed the gap by winning back-to-back games. With the threat of a tiebreaker set looming over them, the Canes bounced back, taking the match 6-4 to secure a crucial doubles point and a top-ten win.

In singles, Wake Forest quickly leveled the score, as graduate Samantha Martinelli thrashed third-year sophomore Maya Tahan in straight sets, 6-4, 6-1. Shortly after, Miami retook the lead thanks to No. 67 Achong’s 6-2, 6-2 rout over Campana.

Next up, the Canes continue their North Carolina road stretch when they face No. 2 NC State in Raleigh at noon on Sunday.