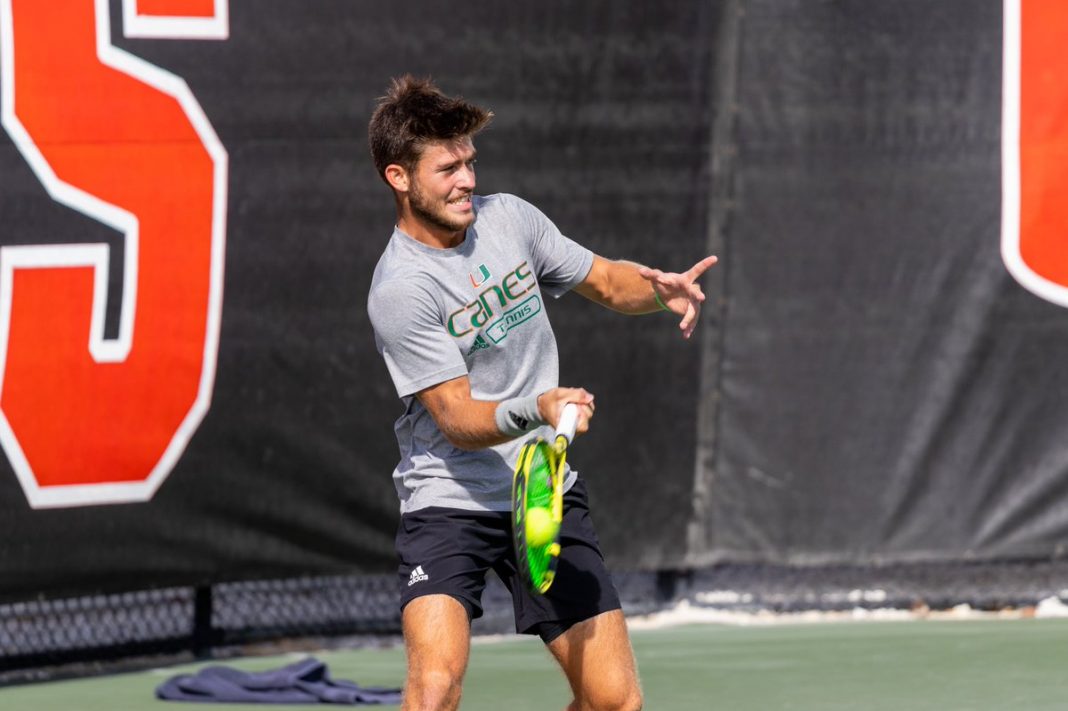 When Miami men’s tennis team took to the courts at the Neil Schiff Tennis Center Friday afternoon, there was clear determination and resolve. This was an opportunity to prove that the Canes can compete with top teams and to give the home crowd a match to remember. Before taking the court, Miami donned jerseys with a Ukraine flag blazed on the left shoulder. This gesture was in solidarity with fellow women’s tennis teammate Diana Khodan, a native Ukrainian.

Wake Forest (18-4, 2-0 Atlantic Coast Conference), the top-ranked team in the ACC and a perennial national title contender, was hungry to assert itself as the favorites for the conference. The Hurricanes (9-2, 0-1 ACC) were coming off a four-game win streak and an undefeated home court record on the season. For both teams, there was a lot on the line.

First came the all-important doubles point. The Demon Deacons grabbed the early momentum on Courts 1 and 2, as both pairs would go up for early breaks. Graduate Jurabek Karimov and senior Siddhant Banthia (WF) showed unrelenting poise and accuracy as they picked apart the combination of fourth-year juniors Juan Martin Jalif and Oren Vasser, 6-2.

Things were looking equally bleak for fifth-year senior Benjamin Hannestad and fourth-year junior Franco Aubone, who were down 5-3 and facing three match points on Court 1. If Wake Forest converted, this would have given them the doubles point straight away.

Miami’s doubles team would not relent, despite their backs being against the wall. The pair miraculously defended all three match points and then two more match points in the next game.

Against all odds, Hannestad and Aubone forced a tiebreak. Jumping to court 3, freshman Martin Katz and graduate Dan Martin (UM) were up a break, 5-3, but could not convert. This match would also go to a tiebreak.

Hannestad and Aubone had two match points of their own within the tiebreak, but Wake Forest showed grit of their own. The match was leveled at 6-6 on Court 1 when Miami fell on Court 3, giving the doubles point to Wake Forest.

Despite falling in doubles, the Canes were emboldened by how close the margin was between the two teams. On Court 5, Jalif put on a masterful performance, winning his match with ease, 6-3, 6-3. Jalif, the FSU transfer, had seen limited action prior to the contest against the Demon Deacons but provided a vital win against the strength of Wake Forest’s lineup.

Next came Martin, the top-ranked singles player for Miami. Graduate Jurabek Karimov (WF) came into the match ranked No. 65, but the No. 117 Martin did not let this intimidate him. He continued his blistering play style on Court 1, brushing past the top Demon Deacons player, 6-3, 6-2, leveling the match at 2-2.

With three singles matches remaining, the Canes needed to win two of them. Fifth-year senior Bojan Jankulovski had won his opening set 7-6 for Miami, but both Hannestad and Vasser dropped their sets.

One of the Hurricanes would have to come from a set down for Miami to have hopes of winning. Both Hannestad and Vasser would rally.

Hannestad had lost his opening set on Court 3, 2-6, but he bounced back, winning the next set, 6-4. Tied at 3-3 in the final set, Eduardo Nava (WF) would come out on top for the Demon Deacons, closing out the match, 4-6. With the score being 3-2 in favor of Wake Forest, Miami would have to win both remaining matches.

On Court 4, Vasser dropped his opening set, 4-6, to sophomore Filippo Moroni but kept battling to narrowly win the second set in a dramatic tiebreak, 7-6 (7-5). Going back to Court 2, Jankulovski had dropped the second set, 4-6, meaning the third sets on Courts 2 and 4 would decide the match.

Jankulovski found his second wind and steamrolled to a third set victory, 6-1. Now tied up at 3-3, the match came down to Court 4. Vasser was up the early break, 2-0, in the third set, but Moroni would have the final say. He won six of the seven next games, and with the slimmest of margins, Wake Forest ended the day on top.

Even in defeat, the Canes can hold their heads high and know that they held their own against one of the best teams in the country. The margin between the teams was minuscule, and Miami should have bolstered its confidence as they continue to compete in the ACC. Their next match is on Sunday at 1 p.m. when they take on No. 20 North Carolina State at the Neil Schiff Tennis Center.