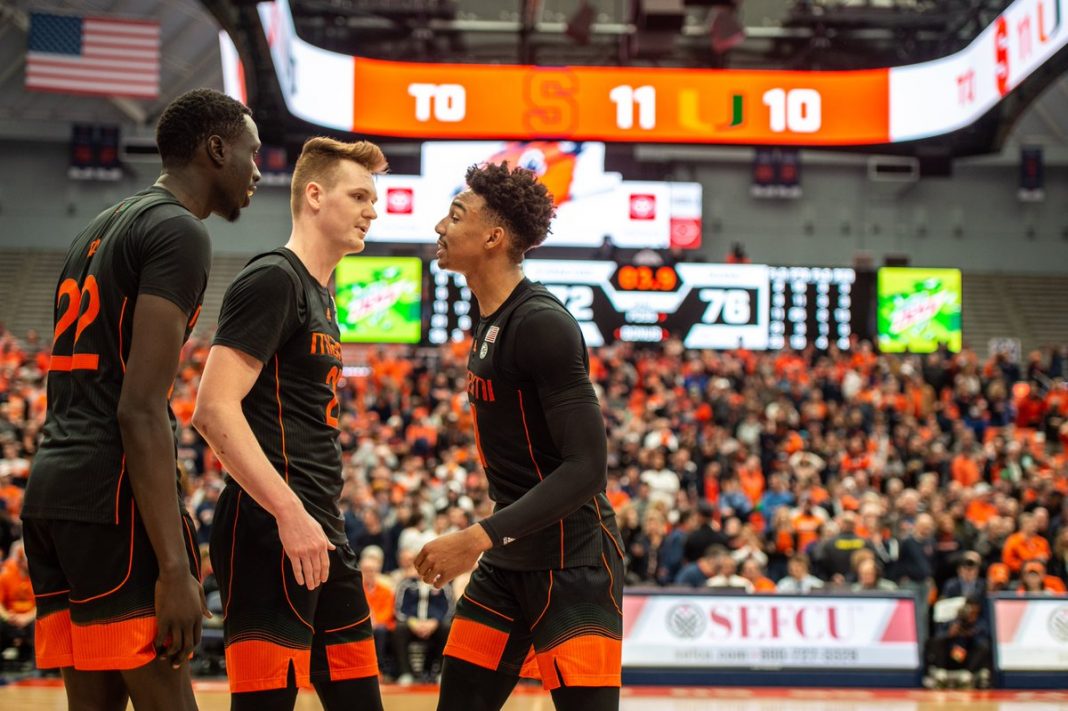 It was 72-65 in favor of Syracuse with 1:10 left in the game. Most people would think that a comeback would be next to impossible. But in college basketball, the game is never over until there are three zeros on the game clock. Miami was able to create offense and defend almost perfectly, and crazily, was able to overcome the odds, defeating the Orange, 75-72.

Sixth-year senior guard Charlie Moore missed a free throw that was rebounded and laid in acrobatically by fourth-year guard Jordan Miller. This basket put the Hurricanes up 73-72 with 11 seconds left and ultimately decided the game.

“This is a big win,” Miller said. “Winning at Syracuse on the road against a good team definitely says a lot about our team.”

The game-deciding field goal by Miller culminated an amazing performance of 25 points and 13 rebounds, shooting 10-for-13 from the field.

“Jordan Miller is the best offensive rebounder on our team,” Miami head coach Jim Larrañaga said. “For him to get that one at the end was real spectacular.”

On his senior day, guard Buddy Boeheim showed out with 30 of the 72 Syracuse points. It was shown to be not enough.

The game started out with Miami jumping out to a 5-0 lead, but an eight-point scoring streak by Buddy Boeheim helped Syracuse jump out to an 11-7 lead after five minutes of play.

Miami kept the pace once more when Waardenburg was inserted back in, resulting in the lead being 31-22 in favor of Syracuse with three minutes of game action left before halftime.

The first half ended with Miami making one of its last seven field goals, helping Syracuse jump out to an 11-point lead, 37-26, at the end of the opening period. The difference in why Syracuse had the lead was because of its field goal percentage from deep. Syracuse made 50% of its 3-point attempts, while Miami shot just nine percent from beyond the arc.

The second half started out abysmal for the Canes. They committed a pair of turnovers, and a 7-0 Syracuse scoring run ensued, giving the Orange a 44-26 lead. This was the biggest deficit of the game for Miami.

The initial optimism for a comeback came with a 13-0 scoring run by UM in the span of three minutes to make the score 44-39.

Syracuse kept the margin similar until that 65-72 score with 1:10 remaining in the game.

This concluded the regular season for the Canes, who are next playing in the ACC Tournament, where Miami has a double-bye. UM will play on March 10 at the Barclays Center in Brooklyn, New York.