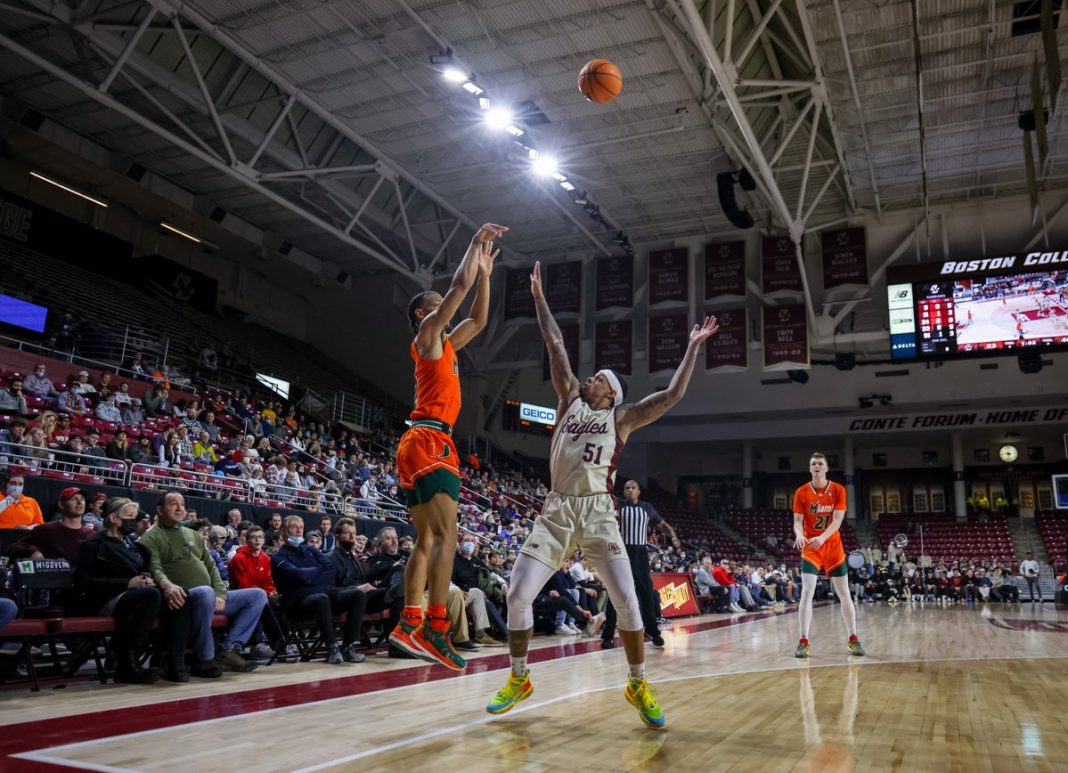 The Miami Hurricanes (21-9, 13-6 Atlantic Coast Conference) defeated the Boston College Eagles (11-18, 6-13 ACC) on Wednesday night in Chestnut Hill, Massachusetts by a score of 81-70, securing a double-bye in next week’s ACC Tournament.

The victory was Jim Larrañaga’s 221st as head coach of Miami, making him the men’s basketball program’s winningest coach of all time. The record previously belonged to Bruce Hale, who won 220 games as Miami’s head coach from 1954-1967.

When asked about reaching the milestone, the always-humble Larrañaga was sure to shift the credit to anyone but himself, stating, “I brought my coaches with me from George Mason to Miami 11 years ago, and they did a great job of building the program … When you have good players and good coaches, you have the opportunity to win a lot of games.”

One player who certainly gave the Hurricanes the opportunity to win against Boston College was sophomore guard Isaiah Wong, who led the team in both scoring and rebounding with 27 points and 7 boards, respectively.

It didn’t take long for Wong to exert his dominance on this game; with just under three minutes played, he gave Miami a 5-2 lead that it would never surrender by draining the first of his five 3-pointers on the night.

Wong scored 12 of the Hurricanes’ first 18 points, leading the visitors to a sizeable lead which they would go on to nurse for the rest of the contest.

“If I make one, the basket just starts getting larger and larger,” Wong said. “The shots I was hitting made my confidence better so I just kept on shooting.”

Wong’s stellar play, along with 17 Miami points off eight Boston College turnovers, allowed the Hurricanes to build a 40-25 lead at halftime as the Eagles struggled offensively.

Boston College performed better in the second half, thanks to 19 points from senior guard Makai Ashton-Langford, but was never able to draw any closer than 10 points down as Miami had a response for seemingly every Eagles basket.

Many of these responses came from fourth-year guard Jordan Miller, who had 18 points on 8-for-10 shooting, and redshirt senior forward Sam Waardenburg, whose 16 points came on 5-for-7 shooting.

Miller and Waardenburg’s performances represented an extremely efficient game by Miami’s starting lineup, who scored 79 of the Hurricanes’ 81 points on the night and played a very assured brand of basketball throughout.

Miami stuck to their head coach’s principles and certainly made him happy on Wednesday night, as securing an ACC Tournament double-bye on the night of Larrañaga’s record win exhibits a strong bounce-back from last weekend’s disappointing Senior Day loss against Virginia Tech.

The Hurricanes will now travel to Syracuse, New York ahead of their season finale against the Syracuse Orange on Saturday. Tip-off is scheduled for 1 p.m.