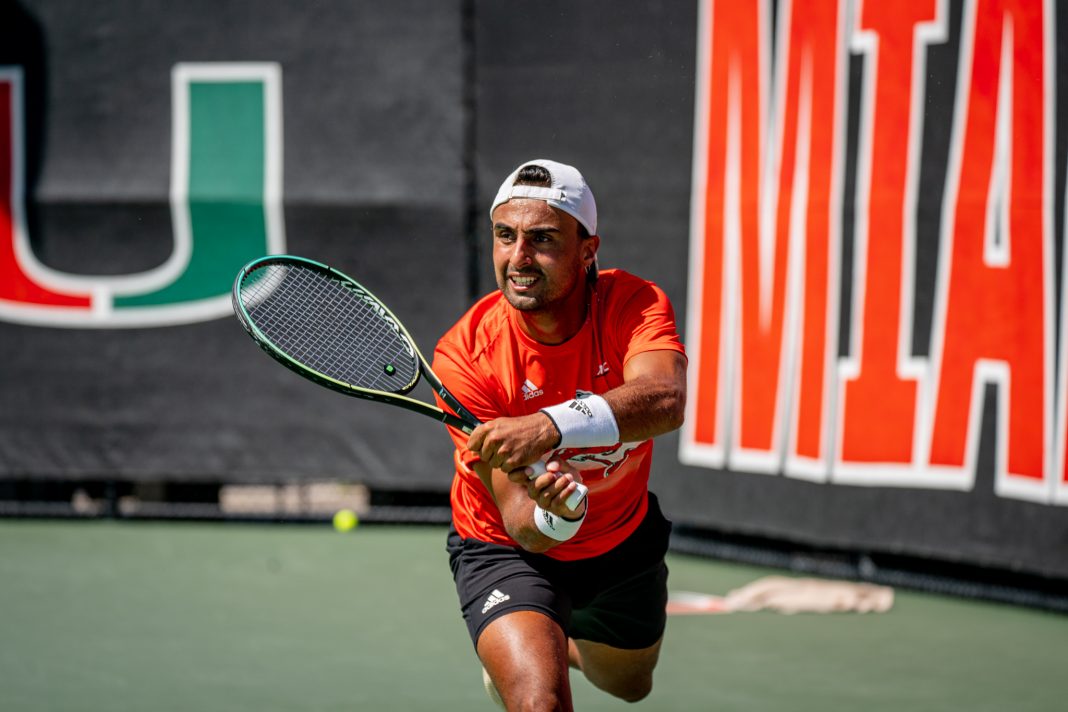 Miami men’s tennis (9-1) is now the winner of its last four matches. On Saturday afternoon, the Hurricanes faced off against the Liberty Flames (3-5) for their second match in two days.

Unlike the day before against Florida Atlantic, Miami led from start to finish. Opening doubles play, the Canes coasted to an easy victory on Court 3. Graduate student Dan Martin and freshman Martin Katz overpowered the Liberty pair, 6-2. Soon after, fourth-year juniors Juan Martin Jalif and Oren Vasser secured the doubles point for Miami, 6-4, on Court 2. On Court 1, Benjamin Hannestad and fourth-year junior Franco Aubone were locked in a close dual before the match was called off.

Leading off singles play, Hannestad, the fifth-year senior, put on a commanding performance on the third court. He was the first of the Hurricanes to finish, winning 6-3, 6-2, against sophomore Rafael Marques Da Silva and energizing the rest of the team.

On Court 5, Katz was the next to finish. After blitzing his opponent to a first set shutout. He cruised to a 6-4 second set to close out the match.

In what would be the clinching point, Vasser only dropped three games and won in convincing style, 6-2, 6-1.

Despite the overall winner having been decided, the two teams agreed to continue the other matches still in progress. No. 117 Martin continued his winning ways, defeating senior Nicaise Muamba, 6-3, 6-2. Next up for Miami was freshman Casper Christensen, who held on to a close match in straight sets, 6-4, 6-4. Christensen remains undefeated on the year, providing important stability at the sixth singles position.

Last came fifth-year senior Bojan Jankulovski on Court 2. He was pitted against junior Josh Wilson of Liberty in what turned out to be a roller coaster of a match. After initially storming to a 5-0 lead against Wilson, Jankulovski would end up dropping the set in heartbreaking fashion in a tiebreak, 6-7 (5-7).

Jankulovski did not let the events of the first set phase him and bounced back in an extremely tight second set, 7-6 (7-5). By this point, all the other matches had finished, which left the entire crowd focused on the decisive third-set tiebreak. After going back and forth, Jankulovski would go on to win by the slimmest of margins, 10-8, keeping UM perfect on the day.

The Hurricanes only lost one set against the Flames as they head into what will likely be their toughest match of the season next week. Miami will face off against No. 8 Wake Forest to open ACC play. Catch the match next Friday at 4 p.m. at the Neil Schiff Tennis Center.