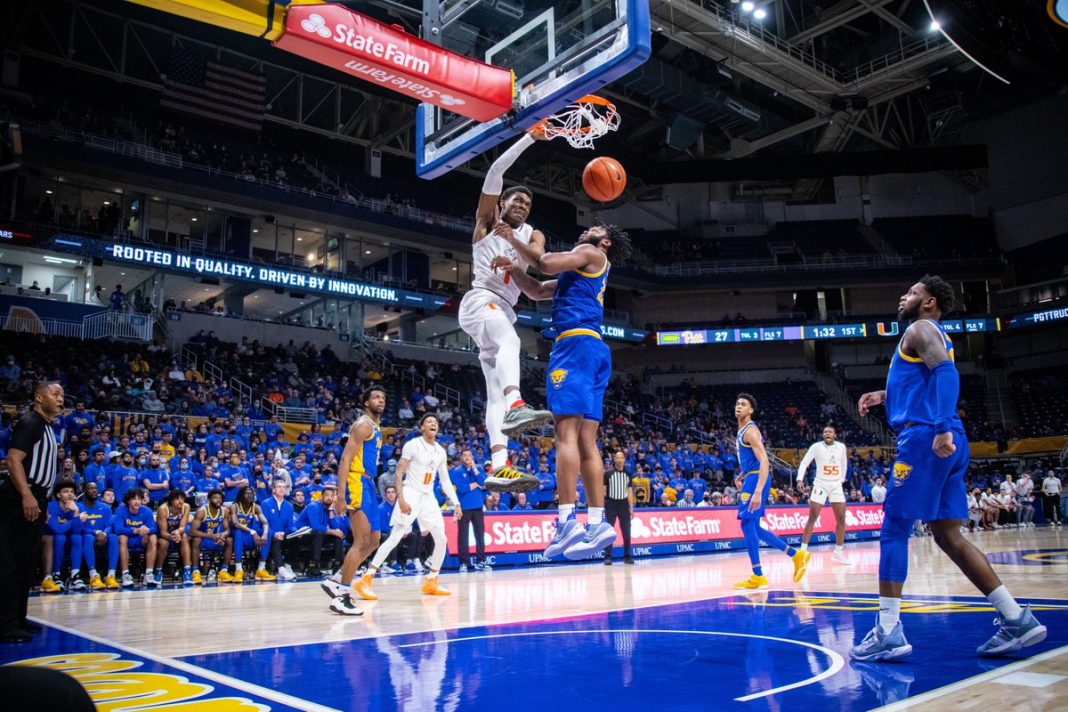 Miami men’s basketball has more than just a win to celebrate as it heads back to Coral Gables after dominating the Pittsburgh Panthers on their home court, the Petersen Events Center.

The 85-64 win over the Panthers brought the Canes to 20 wins this season, the first time they have had a 20-win season since 2018. This victory also brought Miami head coach Jim Larrañaga to his 220th win as head coach of the Hurricanes and his 690th in his career. He is now tied for the most wins in program history with former Hurricanes basketball head coach Bruce Hale, who served from 1954 to 1967.

Miami (20-8, 12-5 Atlantic Coast Conference) cruised throughout most of the game, shooting 55% from the floor and 45% from 3-point range. Four players were in double figures tonight for UM, including senior guards Charlie Moore and Kameron McGusty, who led the Hurricanes with 19 points each.

“The regular season is a marathon, and we told the team there are four miles left,” Larrañaga said. “This was one of four, and now we have three left, and in order to win a marathon, you have to run your best at the end of the race, and that’s what we’re trying to do.”

Pittsburgh (11-18, 6-12 ACC) stayed in the game early, responding to a 14-2 run from the Canes with a 10-0 run of their own. Eight of the Panthers’ points within the first 8:48 came from 6-foot-10 graduate guard Mouhamadou Gueye. The competitiveness from the Panthers did not last long, however, when a dunk attempt left Gueye crashing into the floor and exiting the game with a hand injury.

While Gueye entered the game again in the second half and was amongst the leading scorers of the night, a 20-point game from sophomore forward John Hugely could not help the Panthers recover from their 20 committed turnovers, which led to 30 Hurricane points.

Four combined steals from fourth-year junior Jordan Miller and McGusty, who both rank among the top five in the ACC in steals per game, along with some key deflections, helped the Hurricanes possess the ball and create offensive opportunities.

McGusty, who led the Hurricanes with three steals, suffered what seemed like a jammed finger as he walked off the court in the game’s final minutes. The severity of his injury has not been confirmed yet.

The Panthers have had a rocky season but have seen success against ACC foes such as Florida State and North Carolina. They have yet to match up against conference-leader Duke, whom they will play after a week-long break following Tuesday’s loss.

Miami now shifts their focus to the tail-end of the season, where they will play one final game at the Watsco Center against Virginia Tech before heading on the road to Boston College and Syracuse. Saturday’s tip-off against the Hokies is scheduled for 3 p.m.