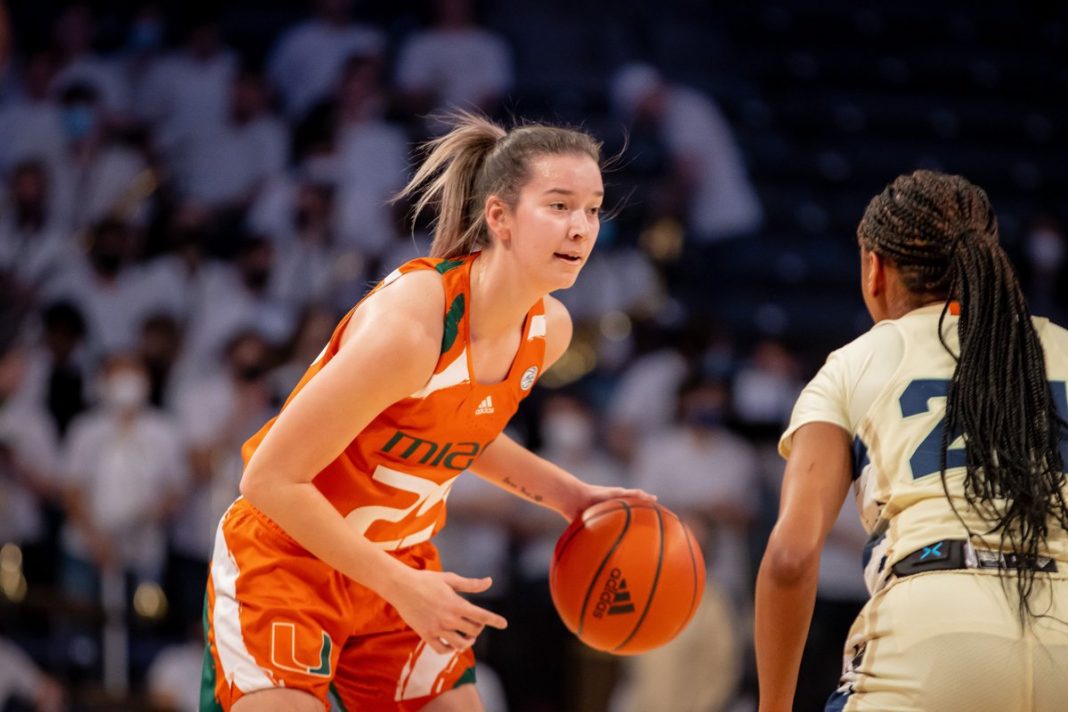 With 12 points, senior guard Karla Erjavec led a balanced scoring attack from Miami women’s basketball in its 51-39 road victory over No. 16 Georgia Tech at McCamish Pavilion.

“We absolutely deserved that win,” Miami head coach Katie Meier said. “We earned it. We fought hard for it. The players were so dialed in… We executed plays that we had to execute in order to score because Georgia Tech’s defense is so good.”

The Hurricanes (16-10, 9-7 Atlantic Coast Conference), who entered today’s contest 1-7 against ranked opponents this season, stifled Georgia Tech’s offensive attack from the opening tip. The Yellow Jackets (19-8, 10-6 ACC) scored a measly 12 points in the game’s first 20 minutes of action, shooting a woeful 3-for-23 from the field.

“I thought our interior defense was incredible,” Meier said. “It is so hard to guard [Lorela] Cubaj and [Nerea] Hermosa… We held those two to 11 points total.”

Miami did a great job of forcing the Yellow Jackets into careless mistakes with the ball. Georgia Tech committed 22 turnovers in their loss to the Canes, which is over eight more than their season average of 13.4 turnovers per game.

In comparison, Miami only committed 14 turnovers, which is under its season average of 17.3 turnovers a game.

With their win streak now extended to four games, the Hurricanes will be looking to continue their winning ways as they attempt to add more quality wins to their postseason résumé.

Next up, the Hurricanes will travel to Blacksburg, Virginia to take on No. 23 Virginia Tech. Tip-off will be on Thursday at 6 p.m. at Cassell Coliseum.

“It’s going to be a different fight,” Meier said. “[Virginia Tech] scores quite a bit… We’re going to have to not give them the ball a lot, and I thought that was one of the reasons [why] we controlled the game tonight.”