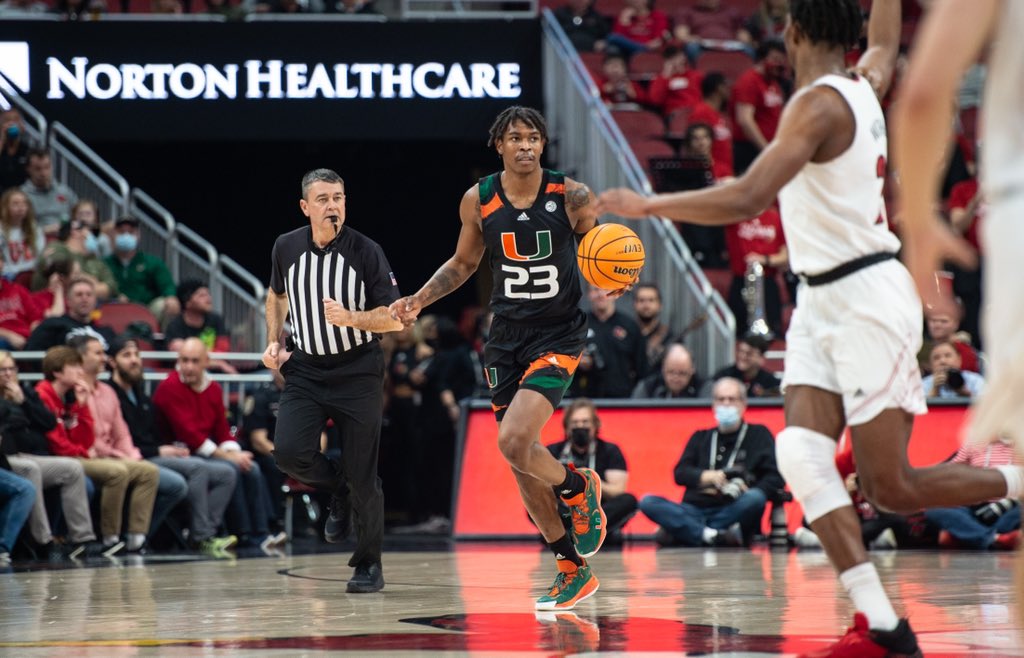 On Wednesday night, Miami head coach Jim Larrañaga picked up his first career win at the KFC Yum! Center as the Hurricanes (19-7, 11-4 Atlantic Coast Conference) emerged with a 70-63 victory over the Louisville Cardinals (11-14, 5-10 ACC).

“The KFC Yum! Center has not been kind to us in the last half-dozen years, and it was very important for us to play well and to get the win,” Larrañaga said. “Certainly, Louisville was equal to the task and came at us very, very hard, especially in the second half.”

Despite the best efforts of their hosts, it was a game that the Hurricanes controlled throughout, as they led for over 36 minutes of game time and kept the Cardinals at arm’s length for the majority of the contest.

Sixth-year senior guard Charlie Moore set the tone for the Hurricanes as he scored nine of the team’s first 11 points with three 3-pointers inside the game’s opening five minutes.

Miami was able to convert Moore’s hot shooting start into a 16-6 lead after baskets by fellow guards Isaiah Wong and Kameron McGusty, and its advantage hovered around 10 for the remainder of the first half.

Forward Sam Waardenburg’s strong interior play was a big factor in retaining Miami’s lead, as he tallied three blocks in the first half alone and limited the offensive presence of Louisville’s frontcourt all night.

His nine rebounds, along with eight from Wong and seven from junior guard Jordan Miller, helped Miami end the night with a rare advantage on the glass, outrebounding Louisville 38-36.

The Cardinals would not allow the Hurricanes to coast on their home floor all night, as Louisville came out for the second half with increased energy and cut the Miami lead to five on a layup by sophomore guard Dre Davis.

“Louisville turned it up a notch and started driving the ball to the basket and posting us up,” Larrañaga said of the Louisville run to open the second half. “It was very hard to stop them.”

The Cardinals made several runs to draw within striking distance of the lead, but Miami responded each time to rebuild its advantage.

The Hurricanes could be forgiven for feeling that they had put the game out of reach after Wong, whose 15 points equaled Moore’s tally to lead Miami on the night, dialed up one of his signature 4-point plays to stretch the lead to 64-54 with 3:31 remaining.

Louisville refused to make things that easy for the visitors as they immediately responded with a 7-0 scoring run to draw within three, forcing Larrañaga to call a timeout with just over a minute left in the game.

Following the timeout, Miami went to their leading scorer on the season, McGusty, who played the final five minutes of the game with four fouls.

The veteran leader stepped up in a big way, draining a mid-range jump shot that put the game out of the Cardinals’ reach at 66-61 in favor of the Hurricanes with just 35 seconds left on the clock.

“Kam’s ability to hit that medium-range elbow jumper was obviously critical…You have to have players make plays,” Larrañaga said. “You can tell them what offense to run, but they’re the ones that have to execute.”

The Hurricanes will look to carry the momentum of their three-game win streak into a matchup on Saturday against the Virginia Cavaliers at the Watsco Center. Tip-off is scheduled for 5 p.m.