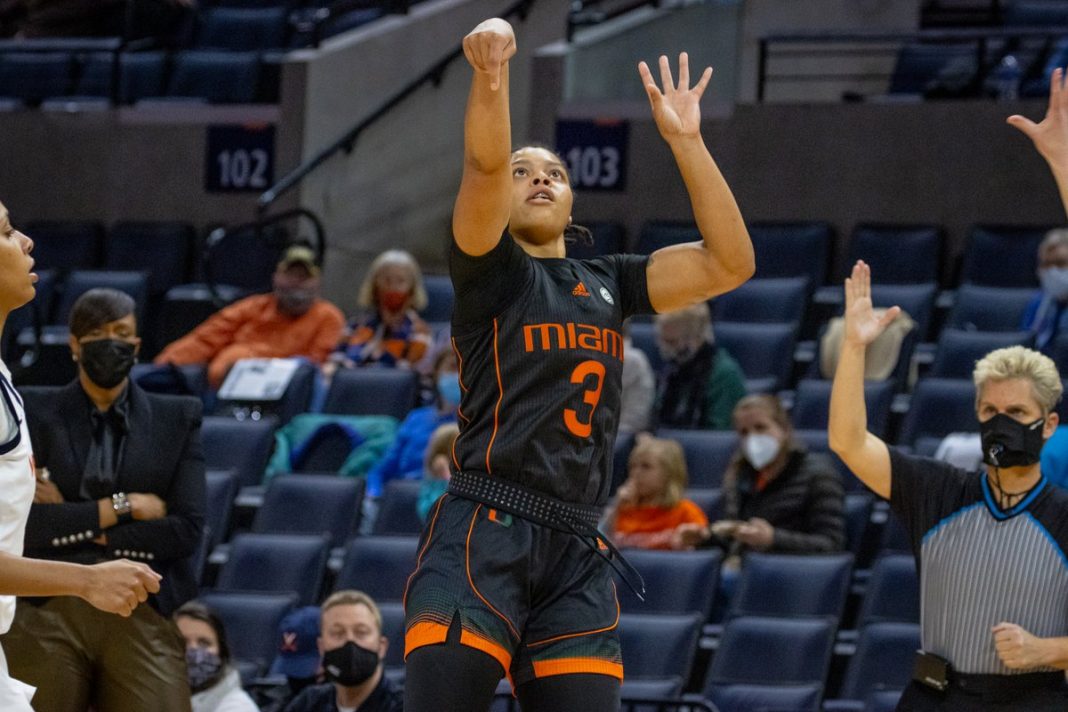 The Canes lead from start to finish, with the score being tied for only the opening minute. Miami held Virginia to an abysmal three points in the first quarter, going on an 11-0 scoring run to close the quarter. This extended the Canes’ lead to 17 points.

The ladies never looked back from then on, increasing the margin all the way to 24 points when nearing the end of the third quarter.

The Cavaliers had no answers on the offensive side of the ball, shooting 30.9% from the field and 25% from deep. Miami accumulated nine blocks and 13 seals and held the opposing offense to fewer than 60 points for the 12th time this season.

Graduate guard Kelsey Marshall, the leader of the team, collected one block, two steals and a team-high seven rebounds. She also continued her hot streak, shooting 4-for-7 from 3-point range and tallying 15 points for the Canes.

Forward Destiny Harden led Miami in scoring with 16 points, shooting above 50% and hitting four threes of her own. Senior guard Karla Erjavec eclipsed the milestone of 300 career assists. She gathered four during the game, bringing her total to 303.

Virginia was led by junior guard Taylor Valladay, who shot 7-for-12 from the field and finished with 17 points. Two other Cavaliers broke double digits in points, but the success offensively ended there. Miami’s bench outscored Virginia 20-6, displaying the Canes’ superior depth and team cohesion.

Miami shot 45.7% from the field and 47.6% from beyond the arc, continuing UM’s hot shooting streak from its win over Florida State.

“With the week we have, this is a heck of a win,” Miami head coach Katie Meier said. “Anytime you win by double-digits on the road in the ACC, I don’t care who your opponent is, that is a huge win.”

Meier referenced the brutal stretch of games the Canes are currently in. Starting with FSU, this was the second of four games within an eight-day span. With only four games left in total, this is a do-or-die stretch for Miami, who is holding onto its slim chance of earning a bid for the NCAA tournament.

Regardless of the context, the Hurricanes have won two games in a row and seem to be playing efficient basketball.

Miami now turns its attention to the Pittsburgh Panthers, who are second-to-last in the ACC, only ahead of Virginia. Tip-off is on Thursday at 6 p.m. at the Watsco Center.