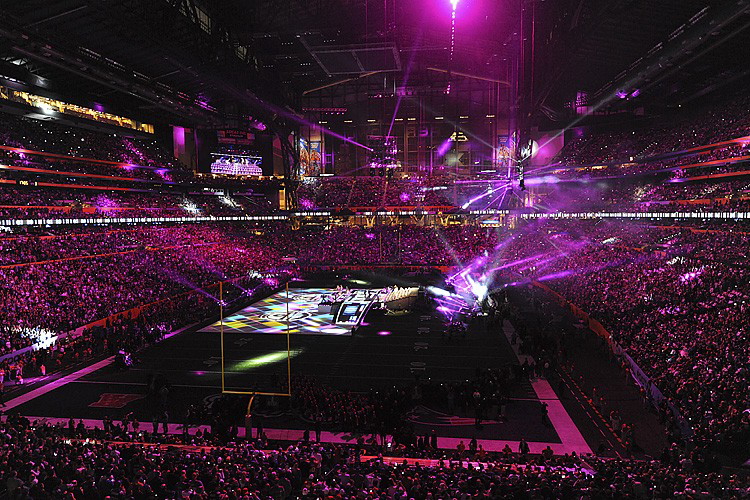 The 2022 Super Bowl Halftime Show, sponsored by Pepsi, took place at SoFi Stadium in Inglewood, Calif., where many of the performers cemented a name for themselves in the music industry.

The show began with the city of Compton’s grid literally in the hands of the legendary rapper, producer and entrepreneur, Dr. Dre. He emerged behind a studio mixing board onto an all-white set, showcasing local Compton businesses, like a barber shop and Tam’s Burgers, before Snoop Dogg joined him to perform a compilation of hits, such as “The Next Episode” and “California Love.”

A surprise appearance from 50 Cent left people feeling like it was their birthday, as he performed his iconic “In Da Club” while UPSIDE. DOWN.

Mary J. Blige made heads turn, as the camera put her beautiful, blonde hairdo and silver thigh-high boots on display. The queen of r&b belted out her “Family Affair” and “No More Drama” hits, which arguably stole the show.

Kendrick Lamar’s elaborate performance of “m.A.A.d city” and “Alright” gave the crowd a taste of what rap has morphed into over the years, while his more than 20 backup dancers paid tribute by sporting their “Dre Day” sashes.

Last, but simply not least, rapper, songwriter and producer Eminem showed up to the party while performing one of his hit singles “Lose Yourself” before joining Dr. Dre to pay homage to legendary rapper, Tupac Shakur. Dr. Dre briefly played the famous riff from “I Ain’t Mad At Cha.” The piano tune segwayed into “Still D.R.E.” where Snoop Dogg, Mary J. Blige, Eminem, Kendrick Lamar and 50 Cent joined Dr. Dre to close out the show.

Rebecca Pineda, a senior majoring in public relations, was very fond of the nostalgia that the halftime show brought to her living room.

“I grew up listening to that music with my dad,” Pineda said. “It definitely took me back to my childhood.”

Others felt as though the halftime show did not live up to the grand expectations that surrounded the performance leading up to showtime.

Quinn Robinson, a sophomore majoring in psychology and motion pictures, felt as though it was “definitely underwhelming,” as she had set her expectations very high for the star-studded lineup.

Jillian Tarini, a sophomore majoring in architecture, noted that while this halftime show featured the most iconic artists compared to past shows, the choreography and props were not elaborate or impressive.

“The performance itself wasn’t as impressive as past shows,” Tarini said.

Some viewers poked fun at Generation Z, claiming they may not understand the significance of what took place on Sunday night. But, as Dr. Dre raps in “Still D.R.E.,” “they say raps changed” and we wanna know how Dre feels about it.

No matter what your take is on the 2022 Pepsi Super Bowl halftime show, this was the first time that hip-hop was the main act for one of music’s most important nights, but it will certainly not be the last.