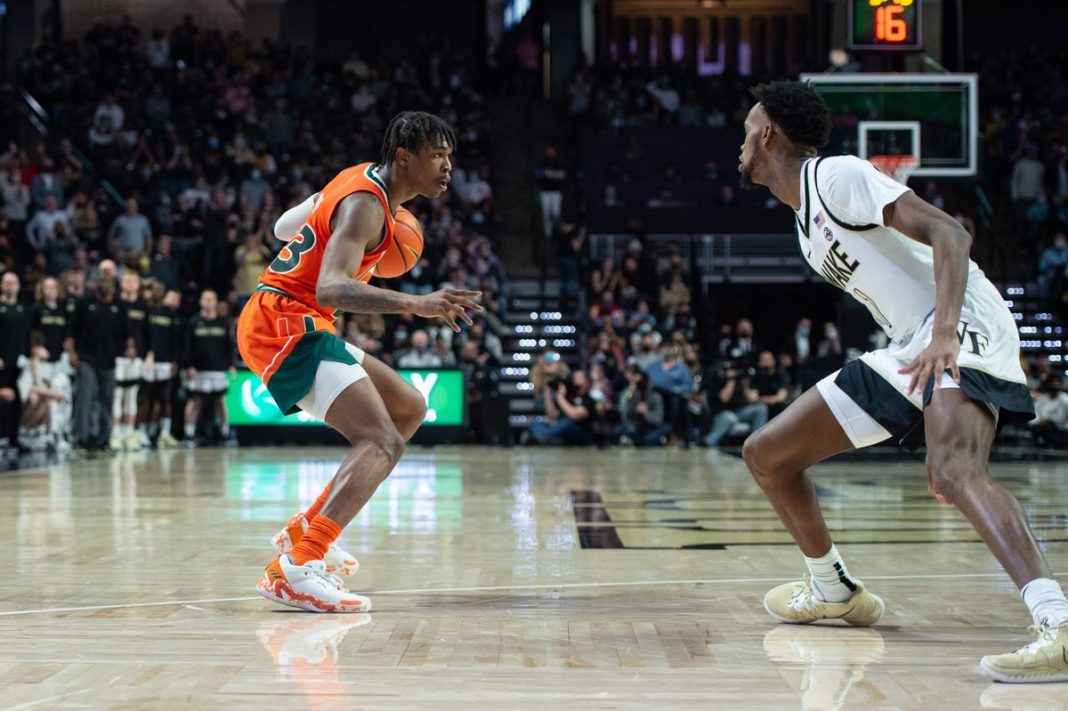 Down 33-40 at halftime, Miami men’s basketball completed their second consecutive second-half comeback after trailing against Georgia Tech at the end of the opening period on Wednesday. This is also the first time that Miami (18-7, 10-4 Atlantic Coast Conference) has won in Winston-Salem, North Carolina since 2011.

Both teams started off slow offensively, with the score being 7-9 five minutes into the game.

Wake Forest then started to pick up some rhythm and created separation with a 20-13 lead, causing Miami to take a timeout.

Along with the deficit, Miami also found themselves in early foul trouble, setting up Wake Forest to be in the bonus for the last 10 minutes of the first half.

After the timeout, Wake Forest continued their roll with back-to-back 3-pointers from redshirt sophomore guard Damari Monsanto to put the Demon Deacons up 27-16 with 7:03 left in the first half.

The Hurricanes struggled to grab boards in the first half, as Wake Forest held a six-rebound advantage over Miami heading into halftime. In ACC play, Miami ranks last in combined team rebounds, and second to last in both team offensive and defensive rebounds.

In the second half, however, all of these struggles seemed to disappear. A 12-5 scoring run by the Canes brought Wake Forest’s lead down to only one possession.

Miami’s defense forced many turnovers, as Wake Forest ended up having 17 in the entire game, 10 of which were in the second half. UM was able to convert those turnovers into baskets on the offensive end, finishing with 19 points off turnovers.

“If we don’t force turnovers, we’re going to struggle defensively,” Miami head coach Jim Larrañaga said. “When we are forcing turnovers, and we’re pretty darn good in the open court at converting those, that makes a huge difference.”

Not only did the Demon Deacons’ turnovers yield points for the Canes, but Miami’s defensive excellence in the second half decreased Wake Forest’s 3-point percentage from 54% at halftime to 43% by the end of the game.

Fourth-year guard Jordan Miller was injured and was not sure he would play until the day of the game. Even with the injury, he was able to make his presence felt down the stretch of the second half, grabbing three offensive rebounds and scoring six points in the game’s final 12 minutes.

Sixth-year redshirt senior guard Kameron McGusty and third-year sophomore guard Isaiah Wong both shot 8-for-14 from the field and had 22 and 20 points, respectively. Wong sealed the victory for Miami with a 9-foot jumper with 11 seconds left to put the game at 76-72.

Next up, the Hurricanes will play on Wednesday against Louisville, who are amid a five-game losing streak dating back to Jan. 22. Tip-off will be at 7 p.m. at the KFC Yum! Center in Louisville, Kentucky.