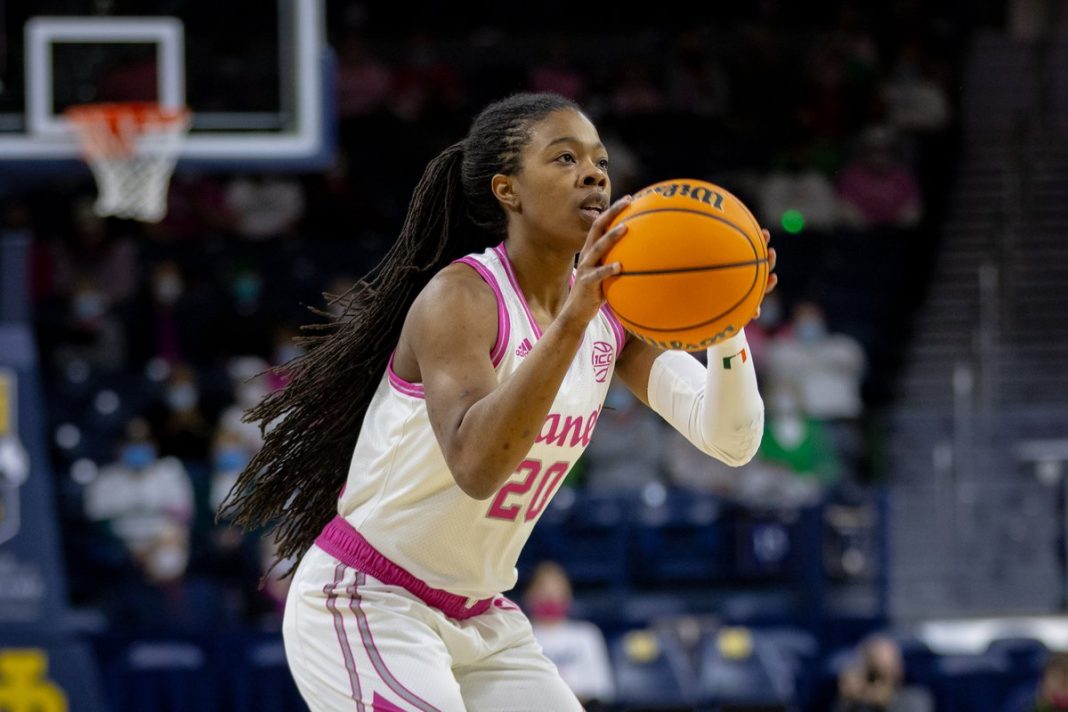 Miami women’s basketball was defeated on Thursday in a road matchup against Notre Dame, 69-53. The Canes faced their second straight ranked opponent, with the other being North Carolina on Feb. 6.

Guard Kelsey Marshall had a strong performance for the Hurricanes (12-10, 5-7 Atlantic Coast Conference), leading the team with 18 points, including six made 3-pointers on just 11 attempts. It was her ninth straight game scoring in double-figures and her 18th contest scoring more than 10 points overall.

“Kelsey Marshall battled her tail off tonight,” Hurricanes head coach Katie Meier said. “She was courageous and a big-time player.”

Marshall, the Hurricanes’ leading scorer on the season, has been a consistent source of offense whenever Miami has needed it, making the most of her graduate season.

The Fighting Irish (19-5, 10-3 ACC) were led by 21 points from sophomore forward Maddy Westbeld, who added eight rebounds as well.

“[Notre Dame] is a very talented team,” Meier said. “I thought their interior defense caused us to get shy around the rim and that really affected our offensive aggressiveness.”

Miami has faced seven ranked opponents this season, winning only one of those contests, against Georgia Tech on Jan. 16. The Hurricanes will face the Yellow Jackets on the road on Feb. 20, looking to sweep the season series.

UM was able to win the fourth quarter against Notre Dame, outscoring the Irish 20-16 to close out the game, but the comeback effort came a little too late, with the Fighting Irish winning the first three quarters of the game en route to the victory.

Miami’s next game is against rival Florida State at the Watsco Center on Sunday, with tip-off scheduled at noon.