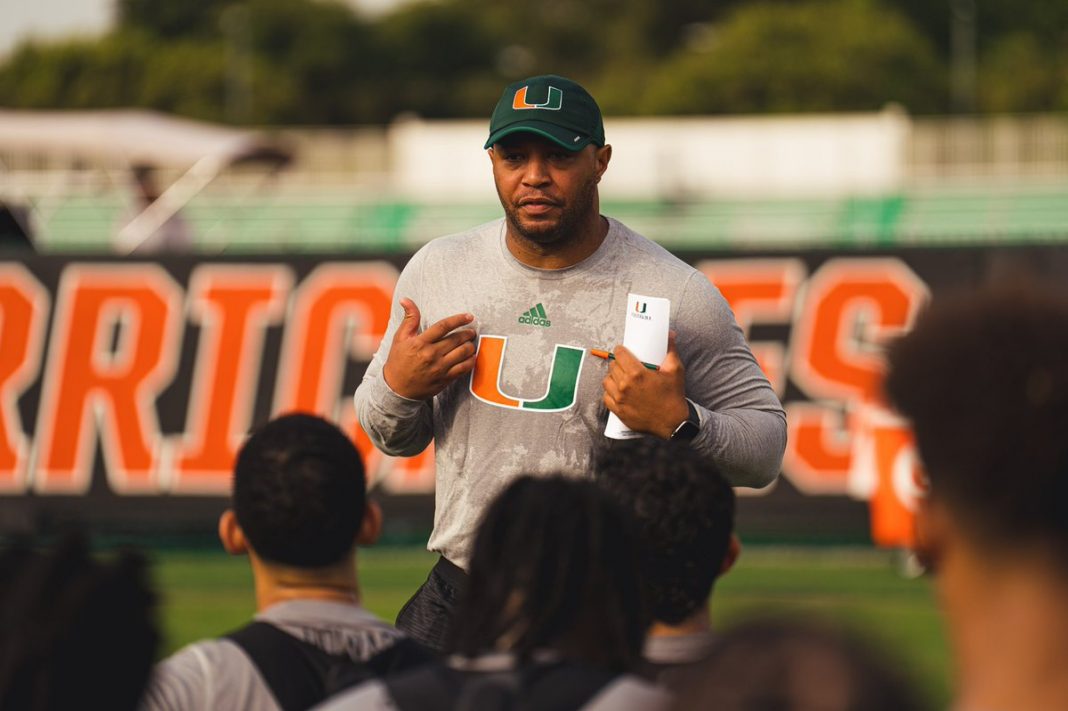 On Feb. 6, Miami football made a splash with the hiring of new offensive coordinator Josh Gattis.

The now 38-year-old Gattis arrived at Michigan in 2019 with the responsibility of taking over a pro-style offense. This included a very run-heavy scheme: power running backs, fullbacks, tight ends, and running between the tackles. This style of offense proved to be outdated, and Michigan struggled to keep up with other teams’ modern and high-octane offenses.

Gattis arrived in Ann Arbor and implemented a new offense with the motto: “speed in space”.

“Obviously, we’re going to put answers on everything to allow our kids to be successful, but if we’ve got multiple wide receivers, we’re going to find a way – as most people have heard me – to get our speed in space,” Gattis told Jon Jansen on the IMG In the Trenches podcast back in 2019.

This offense brought a much faster paced and up-tempo style that has elements of a spread offense mixed in with the ability to play pro-style and physical when necessary.

Gattis likes to work in lots of run-pass options, jet-sweeps, outside zone runs, counter-running plays that utilize pulling guards and pre-snap motions to keep defenders honest. He also likes to scheme up quick passes to running backs and wide receivers, including lots of bubble screens and swing passes with blockers out in front.

The idea behind speed in space is to get the playmakers the ball quickly and let them make plays. This ultimately forces teams to bring more defenders into the box, and this is when Gattis will scheme up vertical passes downfield.

Gattis also makes a point of having a healthy mix of running and passing in his offense and spreading the ball around to as many players as possible. He will look for mismatches he sees on the field and exploit them as much as he can throughout a game.

Another thing Gattis excels at is adjusting to his personnel. At Michigan, senior running back Hassan Haskins proved to be a vital part of the offense throughout the 2021 season.

Haskins is a big and strong back who lacks top-shelf speed. So, Gattis worked in pro-style runs for Haskins while also incorporating his speed in space offense using other weapons around Haskins. This combination led the Wolverines to a conference championship.

Gattis has shown the ability to focus his offense on the strengths of the talent that is given to him and the strengths that will allow the team to have the most success and the players to be utilized to their fullest potential.

This philosophy is tailor-made for Miami as South Florida consists of some of the best athletes in the nation who qualify as “speed in space” type players.

“It’s such a densely-populated, talent-rich area, there’s a reason the entire country comes here to try to get talent,” Miami head coach Mario Cristobal said of the high-school talent in South Florida.

The new-look Canes offense will be very potent in the coming years under Gattis’s leadership.