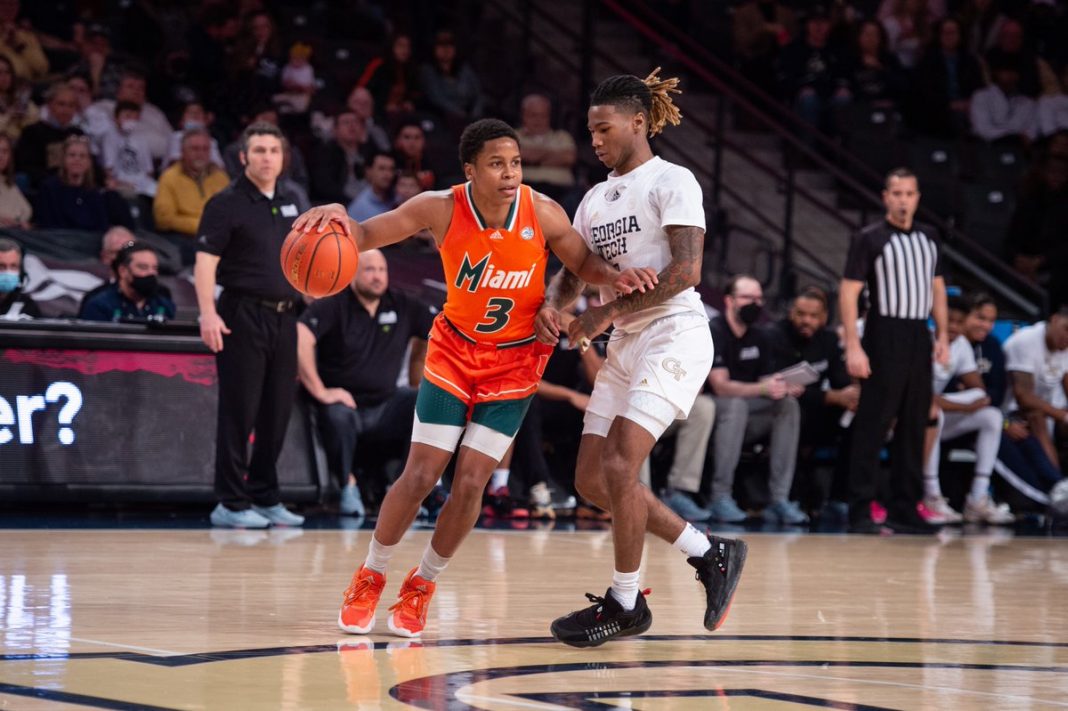 Like most Hurricanes basketball games this season, it wasn’t without drama.

Miami led 36-28 at the half, and after third-year forward Anthony Walker drained his first 3-point shot in ACC play with 8 1/2 minutes left in the second half, they led by 19, which was their largest lead of the game. The Yellow Jackets, sparked by guard Miles Kelly’s three makes from behind the arc, then caught fire, going on an 11-0 run. With less than three minutes remaining, Georgia Tech had cut the lead to six.

To solidify the win, McGusty made a clutch layup, and the Canes drained their free throws down the stretch. They had 21 makes and shot 84% from the line, which proved to be the difference in a game that Miami shot the ball poorly from the field.

“We played terrific for a long stretch,” Miami head coach Jim Larranaga said. “We built up a great lead to start the second half, and we were able to hold on. Real credit goes to the whole team, but in particular Bensley Joseph, who had to come in and run the point at the end of the game when Charlie Moore fouled out.”

Joseph finished with five points and five rebounds in 22 minutes.

Additionally, despite foul trouble, sixth-year guard Charlie Moore continued to excel. After a half-court heave to beat Virginia Tech on Wednesday, the Chicago native became the 12th active Division 1 player with 1500 points and 500 assists on a second-half basket. He finished with 12 points in the win.

Both teams struggled to find a consistent rhythm, often switching between hot and cold spurts. When Miami went on a 7-0 scoring run to start the game, Georgia Tech responded with an 8-0 run of their own.

It was a sloppy performance from both teams, as the Yellow Jackets’ confusing zone defense forced 16 Miami turnovers. The Hurricanes forced 14 turnovers of their own behind some exceptional defense from fourth-year guard Jordan Miller.

With eight rebounds, the George Mason transfer was largely responsible for the Hurricanes’ success on the boards, which has been a point of frustration all season long. This was the first game that Miami outrebounded an opponent since their contest against Stetson on Dec. 20.

“Jordan Miller is a key cog in our web,“ Larrañaga said. “He can switch on ball screens; he can guard a bigger guy. He’s good in and around the basket, and hits an occasional three“

Next up, Miami will to build on their momentum as they travel back home to face the Notre Dame Fighting Irish. Tip-off is set for Wednesday at 7 p.m. at the Watsco Center.