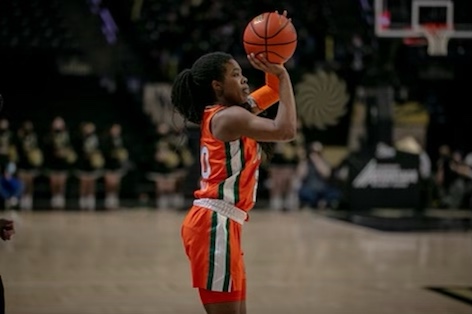 Thursday night was one of the most important nights of the season for head coach Katie Meier’s Miami Hurricanes women’s basketball team. Facing a team that the Canes lost to earlier in the season, Miami went on the road and prevailed 66-59 against Wake Forest to finish their ACC road trip with a record of 2-1. The win comes after a crushing loss to Boston College.

The Hurricanes (11-7, 4-4 Atlantic Coast Conference) were led by graduate guard Kelsey Marshall’s 16 points, as well as 13 points from redshirt senior forward Destiny Harden, who had seven rebounds as well. Marshall added three assists and four rebounds to a Hurricane squad that shot 44% from the field for the game.

Miami led 32-29 at halftime, but a strong third quarter by Wake Forest (12-9, 2-8 ACC) gave the Demon Deacons a lead going into the final period of play. The Hurricanes turned the game around in the fourth, outscoring Wake Forest 22-13 to close out the game. Miami was able to knock down their free throws in the fourth, hitting eight straight from the charity stripe, with six makes coming from freshman guard Ja’Leah Williams.

“She won it at the line for us,” Meier said. “She’s traditionally been a not over 60% [free-throw] shooter and she stepped up to the line. Her and [Harden] made some very big free-throws.”

Williams has shown immeasurable development throughout the season, going from a role player off the bench to a starter all within her first season with the Hurricanes. The South Florida native finished the night with eight points, four assists and three steals, as well as adding a career-high 10 rebounds in a valiant effort for the Canes on the road.

Meier also praised senior guard Karla Erjavec for her phenomenal play of late. The Wyoming transfer tallied eight points and finished with a team-high four assists, as well as grabbing four rebounds for the Hurricanes, who outrebounded Wake Forest 40-35.

“Let me tell you who’s been playing so great for us, Karla Erjavec,” Meier said.

The Demon Deacons were led by junior forward Olivia Summiel and ACC leading scorer Jewel Spear, who both tallied 14 points. Spear ended the night almost three points below her season average, as the Hurricanes’ defense was able to slow down the Wake Forest star.

“If we take care of the backside rebounding like we did in the fourth quarter, people do not score a lot on us,” Meier said.

Next up, the Hurricanes will look to advance their conference record above .500 against one of the best rebounding teams in the nation in No. 5 Louisville. Tip-off is scheduled for Tuesday at 7 p.m. at the Watsco Center.