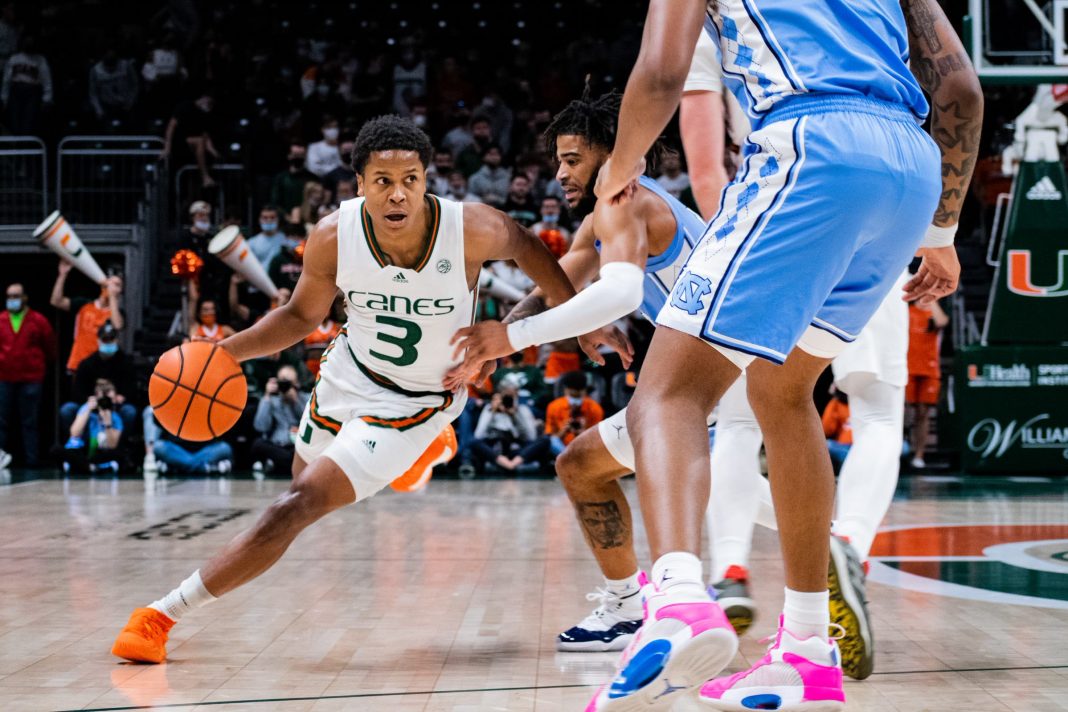 The Hurricanes (15-5, 7-2 Atlantic Coast Conference) exercised the demons of two recent nail biting losses to rival Florida State and came out on the right side of a last-second play in Blacksburg, Virginia on Wednesday night.

Sixth-year guard Kameron McGusty was prepared to inbound the ball just in front of the Virginia Tech (10-10, 2-7 ACC) bench with the game tied at 75-75 with 1.8 seconds left on the clock in Cassell Coliseum.

1.8 seconds later, the game was over.

Charlie Moore curled off of a Sam Waardenburg screen in the backcourt, took one dribble and slung the ball from the half-court line all in one smooth motion.

One could almost hear the collective gasp in the building as the Hokie faithful watched the ball tantalizingly loop through the air, off the glass and in.

“I just ran off the court,” Moore recalled of the moment immediately following his shot. “My teammates followed me down there, they tackled me and they had a great time so I’m happy as well.”

As soon as the ball touched twine, the entire Miami team was off the bench to storm their point guard, who is considered a college basketball elder at 23 years old and in his sixth and final season of eligibility.

All those years of experience paid off for Moore, who never seemed rattled on his way to 13 points and six assists in a tough road contest.

The Hurricanes led for the vast majority of the first half and took a 36-31 advantage into the break after forcing 12 turnovers by the Hokies in a stellar defensive effort.

“Our whole strategy was to try to force some turnovers, because [Virginia Tech’s] Aluma and Mutts are so good in and around the basket, and their guards are such good perimeter shooters,” Miami head coach Jim Larrañaga said. “So our game plan worked in the first half.”

Virginia Tech immediately let the Hurricanes know they wouldn’t be able to cruise to a victory by opening the second half on a 6-0 run to grab the lead.

From that point on, the lead swung back and forth between the two teams as they traded punches from beyond the 3-point line, with both teams shooting at or above 50% from deep on the night.

“I thought our guys hung in there,” Larrañaga said. “We were not playing our best, but we were still in the hunt, and every chance we got, we made a big play.”

The Hokies had their best moment of the night when a dunk by redshirt senior forward Keve Aluma gave Virginia Tech their largest lead at 67-61, forcing Larrañaga to call a timeout with 6:25 remaining in the game.

Coming out of the timeout, Miami went to none other than its leading scorer, McGusty, who drained a heavily contested three to calm the Hurricanes’ nerves and keep them within striking distance.

“Kam McGusty is a sixth-year senior playing as consistently well, I think, as anybody in the ACC,” Larrañaga said. “He can score the ball in many different ways, he’s been defending well and rebounding well.”

Another player who came up big for the Hurricanes down the stretch was redshirt junior guard Jordan Miller, who twice blocked Virginia Tech’s Justyn Mutts in the closing minutes.

The Middleburg, Virginia native also added 18 points in a strong return to his home state, joining McGusty and three other Hurricanes in double figures.

Miami will stay on the road and look to build on this gutsy team win when they travel to McCamish Pavilion for a 12 p.m. Saturday tip-off versus Georgia Tech.