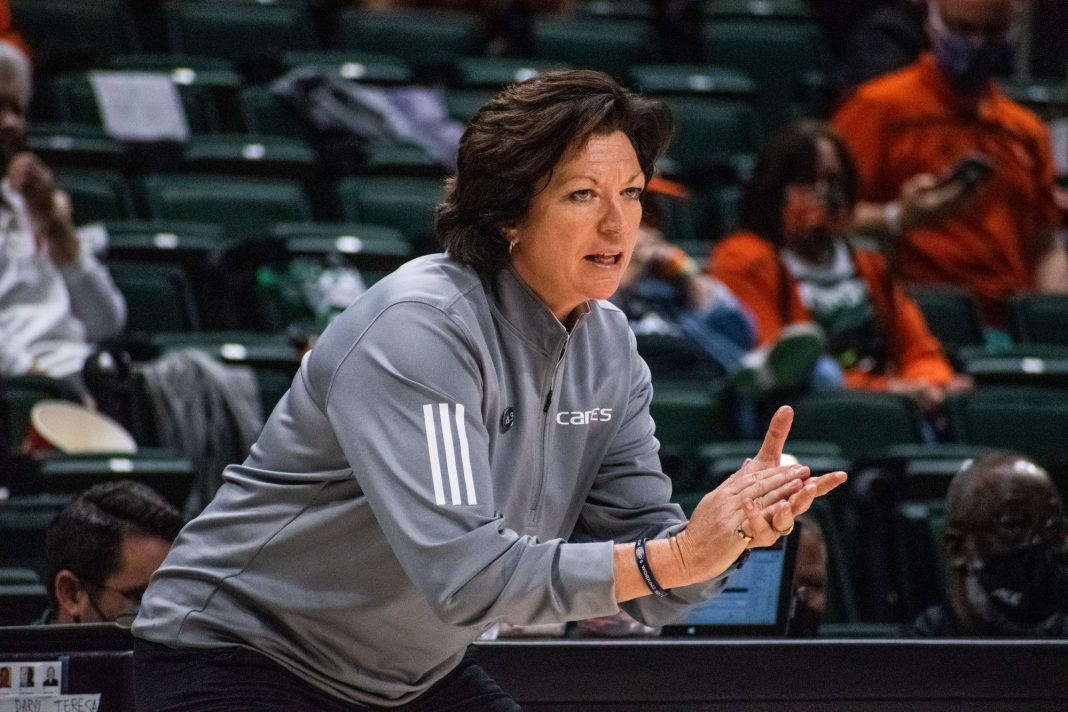 Winning at Florida State remained atop the Miami Hurricanes’ agenda as they entered the Donald L. Tucker Civic Center Thursday.

The fourth quarter clock ran out, and Miami found itself victorious inside the 41-year-old building for the first time since February 2014.

Graduate guard Kelsey Marshall totaled a game-high 21 points, three shy of her season-high, in her 12th double-digit outing of the season. Redshirt senior forward Destiny Harden and graduate guard Mykea Gray added 10 points each, while Miami, now 8-1 when beating opponents on the offensive glass, corralled 19 offensive rebounds in a 59-52 win over the Seminoles.

“We needed it,” Meier said on the Hurricanes’ second road win of the season. “I was able to do a lot of film that we haven’t been able to do because we’ve been ripping and running with these games, but we had a little bit more time before our shootaround [Thursday] morning to get a long film session in. I might have lost a couple [of players]. They might have slept a little bit.

“I kept saying, ‘These are mental reps, we can’t do the physical reps right now. We can’t get you in the gym every day when we have a game every other day. We’ve got to do mental reps. Challenge your teammates, talk through it’,” Meier continued.

Victorious in its first two road matchups, Meier’s team is tied with No. 21 Duke — a team Miami fell to Tuesday afternoon at home — for seventh in the ACC. Junior forward Lola Pendande continues to lead the team’s rebounding efforts, averaging 5.8 per game, and will be vital in anchoring the Hurricanes’ defensive attack with UM holding the ACC’s fifth-leading scoring defense at 56.4 points per game.

“When we got the lead, it was the defensive rebounding,” Meier said. “I thought Maeva [Djaldi-Tabdi] and Lola had a tough game on the offensive end, but they really walled up and protected the paint very, very well.”

Led by senior guard Cameron Swartz’s 28 points, Boston College (13-5, 4-3 ACC) rallied from 14 points behind to knock off No. 17 Notre Dame 73-71 Thursday night. The Eagles, 5-0 following losses this season, target a sixth victory in their past seven matchups against the Hurricanes, after scoring 32 points in the final 12:53 of their win.

As Miami seeks its fourth conference win in five occasions, the mentality of winning across a three-game road stretch with a mirrored focus and energy stays the same. Neither of its two road wins have been of greater than 10 points, though margin is of small concern.

“Road wins count triple in the ACC and I think that we have a tough stretch here, where we have four games in a week,” Meier said. “We’re 2-1 right now and Boston College’s going to be a heck of a challenge, but this was a really important game to win. It really keeps us in the middle of the pack [of the ACC] here; it keeps us fighting for some upper half of the conference kind of things. It’s really important to win road games in the conference, and we already have two road wins.”

The Hurricanes and Eagles are scheduled to tip off from Conte Forum Sunday at noon.