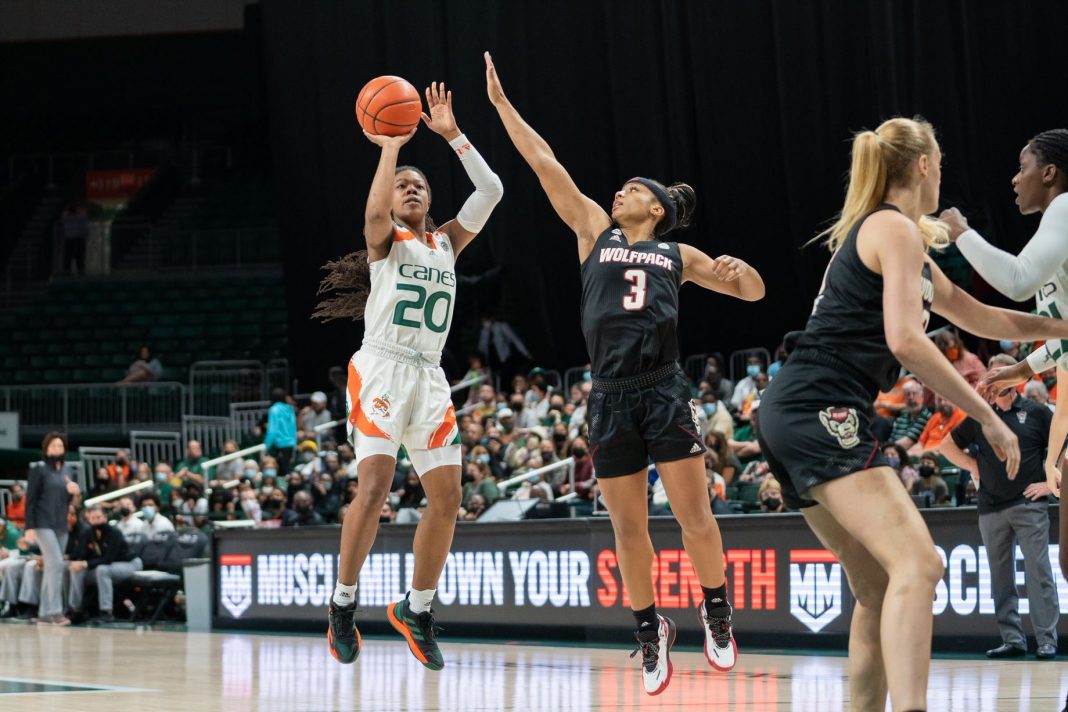 An early deficit on the road during one of the toughest stretches of the season was no major obstacle for head coach Katie Meier’s Miami Hurricanes as they came through with a major bounce-back ACC win.

“Upperclassmen stepped up in a rivalry game and got a win in a place that it’s never gotten before,” Meier said.

Her three longest-tenured Hurricanes, senior guard Mykea Gray, graduate guard Kelsey Marshall redshirt senior forward Destiny Harden, all scored in double-figures as Miami women’s basketball escaped Tallahassee with a 59-52 victory. Marshall led the way in scoring with 21 points, producing key buckets for the Hurricanes down the stretch when they needed them most.

The Hurricanes trailed by as many as ten points in the second quarter, but Marshall urged the team “to remain focused and to not give up.”

Marshall has been a steady hand for the Hurricanes all season, leading the team in scoring with an average of 14.3 points per game, a full point better than her team-leading average from a year ago.

“I really love my team,” Marshall said. “We like to fight, compete and give our all.”

The Hurricanes have become one of the best defensive teams in the ACC this season, and the defense was impressive in the win over Florida State. The Hurricanes held the Seminoles to 18 points under their normal scoring average. Miami also won the rebounding battle, with forward Lola Pendande collecting a team-high nine boards.

“I think we made Florida State very uncomfortable all night,” Meier said.

The Seminoles did not have a single player in double-figures and shot just 32% from the field for the game. The Hurricanes only shot 33% from the field, but they made 11 three-pointers, with Marshall leading the way with five field goals from beyond the arc.

The Hurricanes currently sit in ninth place in the ACC, and Katie Meier expressed the significance of the conference victory after the game.

“Road wins count triple in the ACC,” Meier said. “This was a really important game to win, it really keeps us in the middle of the pack here fighting for some upper conference things.”

Marshall was not the only Hurricane to score in double figures in the victory. Both Gray and Harden added ten points each as the veteran players came through when the Hurricanes needed it most.

“[Gray] and [Harden] have had a rough year with the injuries and missing games,” Meier said. “They spend all their time in the rehab center just to be able to play in a game like this.”

Next up, Miami will travel to Chestnut Hill, Massachusetts for a matchup against Boston College at Conte Forum. Tip-off is scheduled for Sunday at 12 p.m.