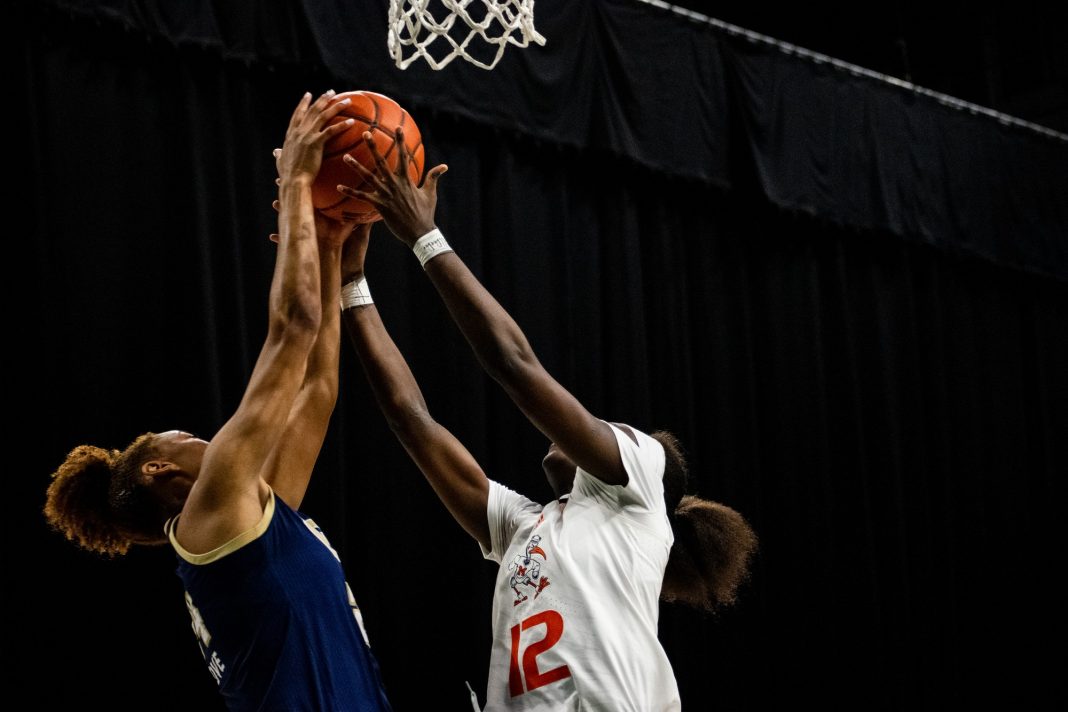 “We had a couple of no-show performances. We had a couple of players that needed to check themselves and get their focus back,” Miami head coach Katie Meier said. “We didn’t deserve to win the game from the jump. We started flat.”

Miami began the fourth quarter on an 8-2 run. Freshman guard Ja’Leah Williams drove for a layup in transition to give the Hurricanes their first lead since the eight-minute mark of the opening frame.

“If you take Kelsey and Maeva out of the equation, that’s about 70% of our scoring, effort, everything,” Meier said. “I’m proud of them, but there’s a lot of zeroes on this box score. Everybody took Tuesday off.”

Duke guard Miela Goodchild led No. 21 Duke (12-4, 3-3 ACC) in the scoring and rebounding columns with 17 points and seven rebounds. Guard Shayeann Day-Wilson added 11 points and a career-high seven assists, despite fouling out in the final minutes.

Miami did not trail by double-digits in the entire second half, but was held to a 25% shooting mark after halftime. Duke outrebounded UM 40-35, and forced the Hurricanes into 14 turnovers.

“We were a little fatigued and mentally off,” Marshall said. “We tried to run certain plays for certain people and we just weren’t executing well enough. And defensively, we weren’t communicating well enough.”

The Blue Devils and Hurricanes exchanged baskets in the first, but later used a 6-0 run to force a seven-point Miami deficit over halfway through the second.

But then, Marshall and Djaldi-Tabdi took control of the Hurricanes’ offensive attack.

Marshall converted an old-fashioned 3-point play and Djaldi-Tabdi drilled a 3-point field goal, leveling the contest at 26 points apiece. With under a minute left, Day-Wilson answered with a triple of her own to send the Blue Devils into the locker room with a three-point lead.

In a close third period, Duke again turned to Day-Wilson, who scored six of the Blue Devils’ 13 points. The Hurricanes produced five straight points over the frame’s final 5:26 to pull within two, until Duke forward Lexi Gordon hit an open 3-pointer at the third-quarter buzzer.

Djaldi-Tabdi opened the fourth with another triple and later hit a pair of foul shots, keeping Miami within three while three minutes remained.

On Duke’s next possession, Goodchild made the Blue Devils’ fifth and last 3-point field goal. The Hurricanes came no closer than five points thereafter.

Miami’s defeat marks the seventh time this season that a Hurricanes contest has ended in single-digits. The matchup was originally scheduled for Dec. 19, but was postponed given a previous absence of available Miami players involving COVID-19 protocol.

UM begins a three-game road trip against Florida State in Tallahassee, Florida, on Thursday. Tip-off is scheduled for 8 p.m.