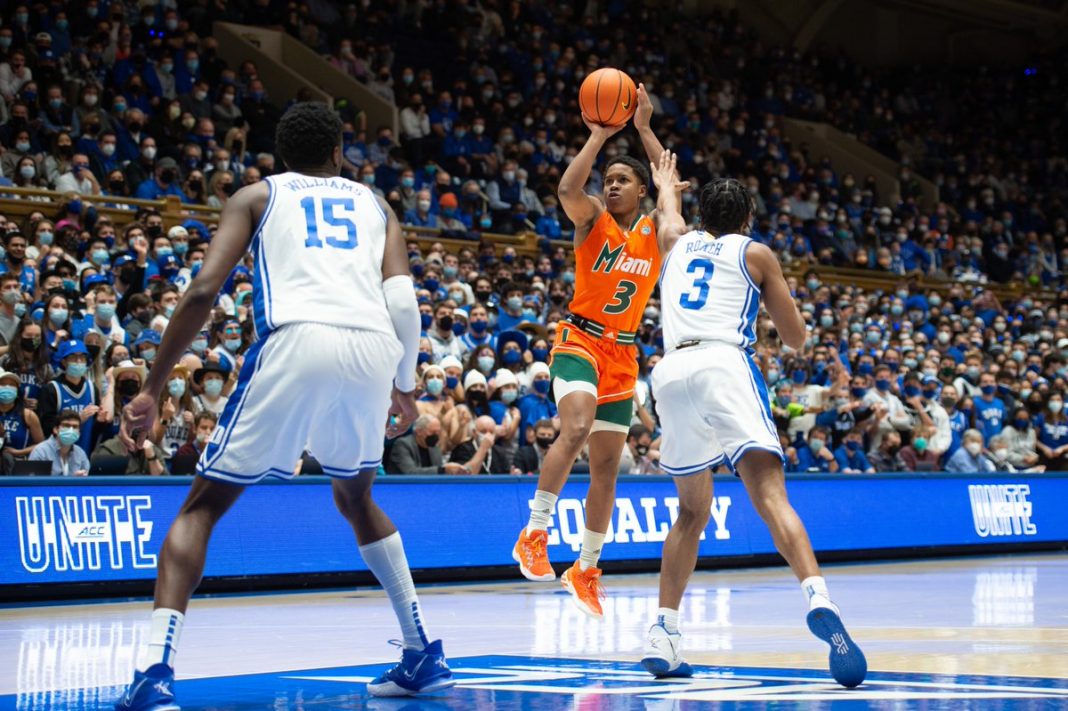 From the opening tip, they battled the nation’s second-ranked team in one of the nation’s most hostile home court atmospheres and needed one last push.

Sixth-year redshirt senior guard Kameron McGusty drove down the middle of the lane and floated in a game-winning layup through traffic to lift Miami over No. 2 Duke 76-74 Saturday night at Cameron Indoor Stadium for the first time since January 2015.

Less than nine minutes remained in the second half and Miami (13-3, 5-0 Atlantic Coast Conference) held a six-point advantage over Duke (12-2, 2-1 ACC). Four Hurricanes again scored in double-digits, but the Blue Devils weren’t finished.

With 44 seconds left, Miami trailed by three points without a timeout. Sixth-year redshirt senior guard Charlie Moore raced to the hoop, drew a foul and rolled in a layup, but missed the following foul shot.

And then, fourth-year junior guard Jordan Miller grabbed the Hurricanes’ 10th offensive rebound. Miami swung the ball to the left wing to set up McGusty for the dagger layup before Duke’s Trevor Keels misfired on a final 3-point miss with 0.7 seconds left.

“To come here to a historic arena like Cameron Indoor,” Moore said. “To come here with my teammates, we play hard together, trusting each other out there on the court and trusting the coaching staff’s game plan. And us coming out with the win, we feel pretty good about it.”

Duke committed 17 turnovers, while Miami had only five. Moore produced a career-most seven of the Hurricanes’ 15 total steals, while scoring 18 points in the team’s ninth consecutive victory.

“We played a fast, good and older team tonight,” Duke head coach Mike Krzyzewski said. “The story of the game was the turnovers. We played well at times and had an opportunity to win, but you have to finish and we didn’t finish.”

Both teams remained tied at halftime following a 13-0 Blue Devils run in the first half. Miami’s early eight-point lead vanished, though the Hurricanes held Duke to below 35% shooting and scored 13 first-half points from forced turnovers.

“We know whenever we play an ACC team, [the opponent will] probably going to be bigger and more physical than us,” Larrañaga said. “So, we really have to do it with teamwork. I thought our guys today really showed great anticipation, and kind of understood what Duke was trying to do with their offense … We surrounded them, deflected the ball a couple of times, stole it a couple of times. That’s teamwork.”

“In the last several timeouts, I kept telling the team to keep throwing it back to Sam and using him as a screen, and they did that beautifully and Sam handled it beautifully,” Larrañaga said.

Duke out-rebounded UM 44-30, but the Hurricanes scored 52 points in the paint and went 8-of-11 at the foul line. Freshman guard Wooga Poplar provided four points off the bench and logged a team-high six rebounds.

Moore and Waardenburg were each tacked with four fouls, while Duke’s Jeremy Roach, Mark Williams and A.J. Griffin all had three. Each team shot 46% and exchanged eight-point advantages across the first half.

With the victory, the Hurricanes received their first versus an Associated Press top-five team since 2016. Larrañaga moved to 7-7 against Duke through his 11th season at UM.

Miami next heads to Tallahassee, Florida, for a matchup against Florida State Tuesday. Tip-off is scheduled for 8 p.m.

“I know for the players, they’re thrilled. They’re excited about a big win like this,” Larrañaga said. “For me, as a coach, I know we have 15 more conference games. So, this is just one of 20. No matter who you beat, no matter where you beat them, it counts as one.”