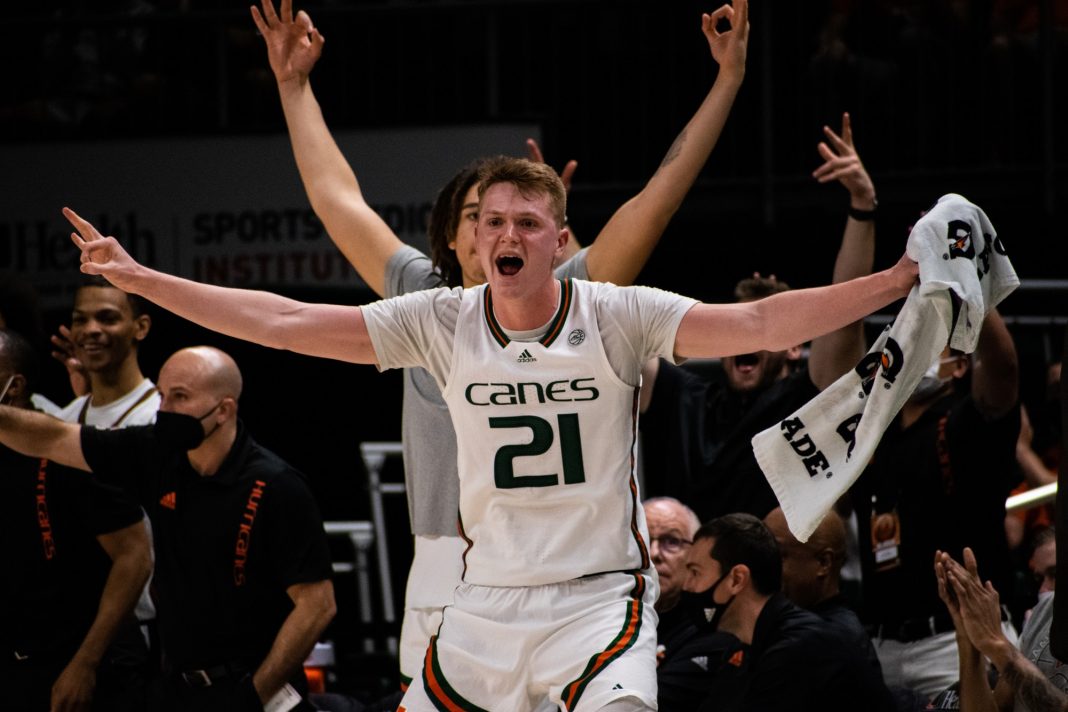 Miami is looking to accomplish something it hasn’t done in almost six years: defeat Duke in Durham, North Carolina.

The last time the Hurricanes were victorious against the Blue Devils amongst the “Cameron Crazies” of Cameron Indoor Stadium was in January 2015, when an unranked Miami team traveled up to Durham and defeated then-No. 4 Duke 90-74.

Circumstances are similar this time around, as Miami (12-3, 4-0 Atlantic Coast Conference) is attempting to make a statement against the heavily favored and second-ranked Blue Devils.

Duke (12-1, 2-0 ACC) is off to another great season led by head coach Mike Krzyzewski, who announced during the offseason that he plans on retiring at the conclusion of this season.

The Blue Devils are led by superstar freshman forward Paolo Banchero, who many experts consider to be the top-rated prospect in the 2022 NBA Draft.

At 17.1 points and 7.5 rebounds per game, Banchero leads Duke in both scoring and rebounding. Standing at 6-foot-10 and weighing 250 pounds, he is a rare mix of size and athleticism at the forward position that makes game planning against him an absolute nightmare.

Miami is 8-22 all-time against Duke, including 2-11 on the road and 6-7 under Hurricanes head coach Jim Larrañaga.

“It’s going to be an entirely different environment than we’ve been playing for the last month,” Larrañaga said of Miami’s upcoming test.

Guards Kameron McGusty and Isaiah Wong lead the Hurricanes in scoring this season; the latter of whom was especially dominant in Wednesday’s win over Syracuse, dropping 19 points to go along with five rebounds and five assists.

“[Duke is] number two in the country, so this is one of the really tough games we have this season,” Wong said. “[We need to] just try to be the most professional team [we can be] and just try to play to the best of our abilities.”

“[The 4-0 start in ACC play] helps us a lot,” Wong said. “We’re just trusting each other going into the game. With all that and with the 4-0 [ACC record] and the eight-game winning streak, we’re rolling right now. We’re on a little hot streak and we’re going to bring it in that game.”

Miami will also need contributions from sixth-year guard Charlie Moore, who played a pivotal role in Miami’s one-point win against Syracuse, scoring a team-high 25 points, including a 6-of-10 stripe from deep. Moore also finished the game with five rebounds and a team-high six assists.

“In ACC play, every game is big,” Moore said. “All these teams are great…these games are big. We just have to take it one game at a time and just try to keep getting better each and every day.”

Elite performances from a myriad of Hurricanes will be needed for Miami to upset the No. 2 Blue Devils. Tip-off is scheduled for Saturday at 8 p.m.

“We’re just trying to get the best of what each player has,” Wong said. “Coming into that game, we’re just going to play hard, just go how the game flows and just try to come up with the win on Saturday.”