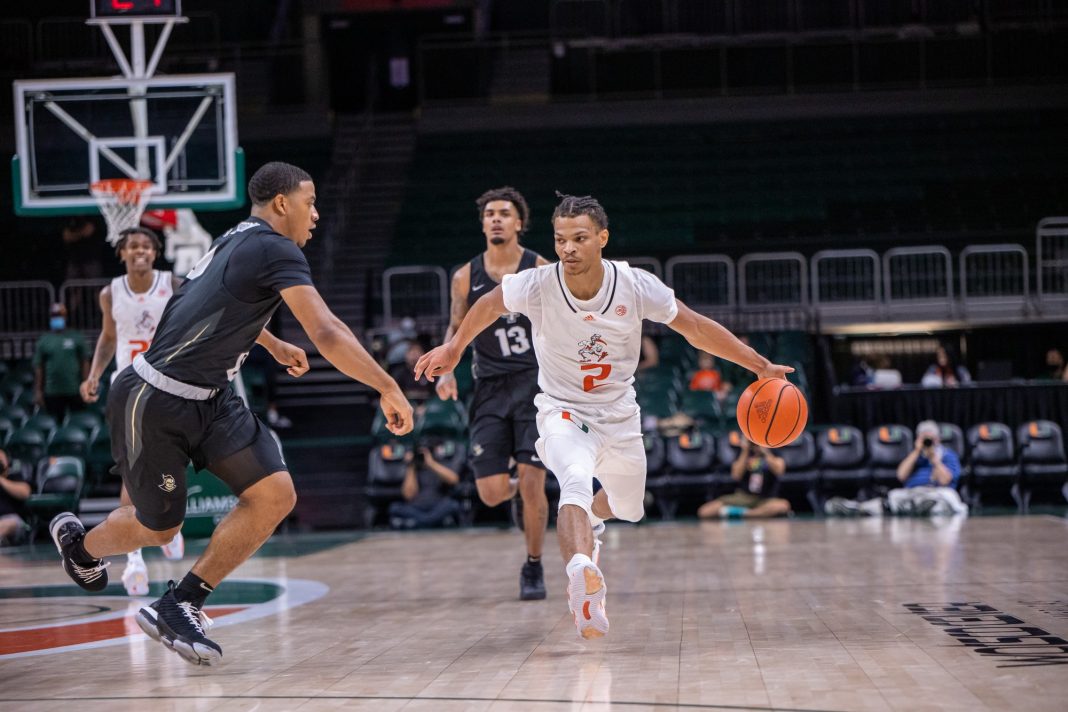 “We all just came in and focused on what we had to do and tried to play our hardest,” Wong said. “We won the game, and we all feel happy.”

Apart from his scoring, Wong played a pivotal facilitating role in Miami’s victory; he was second on the team with four assists.

Leading the Hurricanes (11-3, 3-0 Atlantic Coast Conference) in that department was redshirt senior guard Charlie Moore, who finished the game with seven assists. This was the second time in a span of three games that Moore has produced at least seven assists.

“Charlie got us off to a great start,” Miami head coach Jim Larrañaga said. “Charlie really quarterbacked the team.”

Moore started the game with three made shots from deep in the game’s initial 10 minutes, bolstering the Hurricanes to an early 21-8 lead.

“Playing against a great team like Wake Forest, we had to come out the gates ready to play,” Moore said. “It was important for us to come out with a great start and get our energy going. It led to us playing overall a good game.”

One reason why Wake Forest (11-3, 1-2 ACC) was able to battle back and cut Miami’s lead to as little as two was the advantage they had in the paint. The Demon Deacons outscored the Hurricanes 48-38 in paint points.

This was in part because of the loss of Miami forward Sam Waardenburg, who missed his second consecutive game due to COVID protocols. Waardenburg has started at center for a majority of Miami’s games this season, and his rim protection on defense and ability to space the floor on offense have been missed.

“Sam Waardenburg is a huge part in everything we do,” Larrañaga said. “[Waardenburg’s absence] put a lot of responsibility on Deng Gak’s shoulders to start the game and play well … between Deng Gak, Jordan Miller, and Anthony Walker, we had three guys who rotated at the four and five [positions], and they were a tremendous help.”

Miller, a junior transfer from George Mason, has been tremendous over his last two outings, scoring a total of 42 points and shooting 7-of-11 from deep.

“Jordan’s surprised me with the way he’s taking people off the dribble,” Wong said. “I didn’t know he had all that in his bag. Jordan is a special kind of guard or big, whatever you could call him.”

The Hurricanes will complete their four-game home stand on Wednesday against Syracuse. Tip-off is scheduled for 8 p.m.

“We just have a great team,” Moore said. “We’ve known that from the beginning of the season, but we had to get our chemistry together. It’s our first time playing with a couple transfers and new guys here, so we had to adjust and pick our chemistry up … It’s starting to come together, and I think we’re finding our rhythm.”