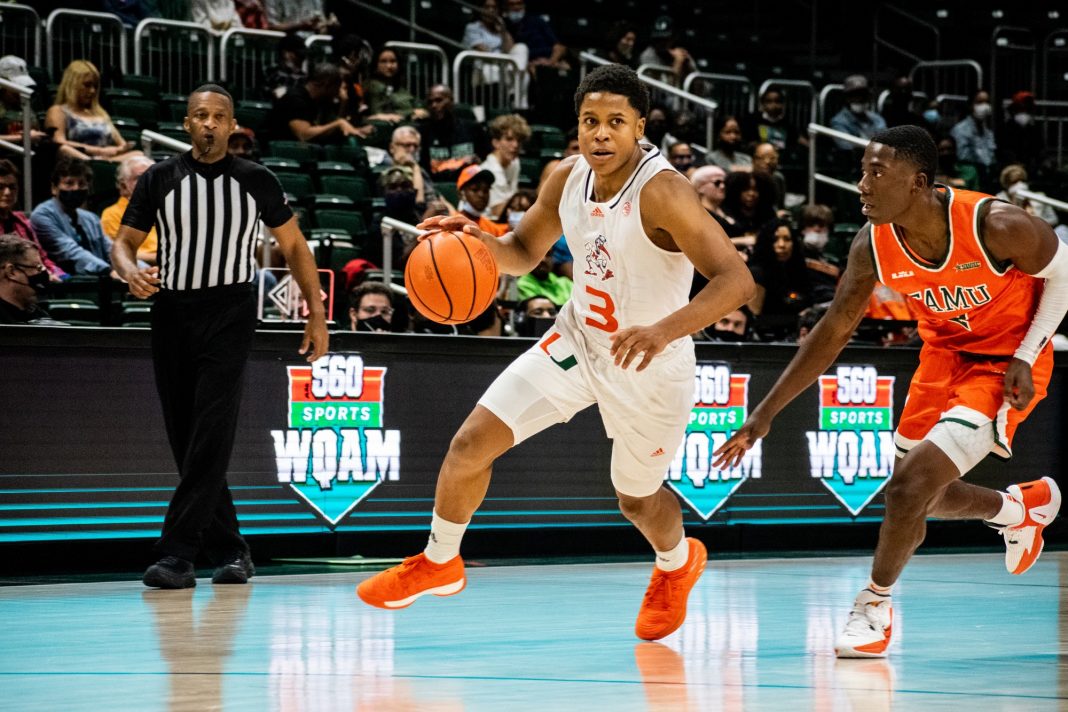 Even with a five-game winning streak, including two wins over Power Five opponents, the Miami Hurricanes (9-3, 1-0 Atlantic Coast Conference) always have to be prepared for what’s around the corner. After a refreshing holiday season where UM played just two games in 17 days, Miami braces for two key home games in conference play.

So far, the season has shown more positives than negatives for head coach Jim Larrañaga. The Hurricanes enter the final week of the calendar year tied with North Carolina for third place in the ACC, despite losses to UCF and Dayton.

In addition, the preparation has been there for the Hurricanes. Miami endured brutal losses versus Dayton and Alabama in the ESPN Events Invitational Tournament over Thanksgiving, which has taught the team a valuable lesson.

“We kind of got beat up a little bit, but at the same time, I think we needed that,” sixth-year redshirt senior Kameron McGusty said. “I’m a big believer in [that] we don’t lose games; we take it as a lesson. I think that’s something we’ve taken head on, and that we’ve embraced.”

From here on in, it’s in-conference play for the Hurricanes, with an entourage of 21 ACC contests from December to March, all leading to the ACC Tournament. The competition will be fierce night in and night out, even in a weakened Atlantic Coast Conference thus far.

The Wolfpack are dealing with a host of changes from 2020 into 2021. NC State lost five of the eight players that participated in at least 15 minutes against Miami last season, whether it be to graduation, transfer, or injury.

“One of the biggest challenges is when you bring in five new guys with the guys that are returning,” NC State head coach Kevin Keatts said. “My biggest challenge early on is developing chemistry.”

Keatts’ team has found some significant strengths in its first twelve games, including a presence to make up for the graduations. Redshirt sophomore Dereon Seabron averaged just 5.2 points and 3.4 rebounds per game last season but enters Wednesday leading NC State in points (19.0), rebounds (10.3), assists (3.1) and steals (1.8), as the only player in the ACC to lead his team in those four metrics.

In addition, the Wolfpack have been hounding the offensive glass this season. NC State averages an astounding 12.8 offensive rebounds per game, the most of any ACC squad. While the Hurricanes rank last, UM has seen one of its transfers make a large impact on the glass in its last three games.

“It’s a bit of both, with being in the right time and having comfort in the program,” junior guard Jordan Miller said. “But it’s also the effort I put in. I take pride in rebounding the basketball.”

Miller, who has snagged 29 rebounds in his last three games, is beginning to play as promised. Despite scoring only one point against the Hatters, Miller led all players with four offensive rebounds and 11 total boards in the contest.

The Hurricanes, who come into Wednesday tied for last in rebounds per game in the ACC, will have to compete in the battle in an effort to continue their win streak. Miami will tip-off against NC State at 9 p.m., and the game will be televised nationally on ESPNU.

That will take the team into 2022, where it will continue its home stand against one of the biggest surprises in college basketball so far. UM’s third conference game will come against Wake Forest, which had been under .500 in each of the last four matchups against Miami, but will enter New Year’s Day with at least 11 wins.

The Demon Deacons have struggled to find a consistent source of offense since forward John Collins’ departure to the NBA’s Atlanta Hawks. As good things come to those who wait, the answer has come through an Oklahoma transfer.

Redshirt senior guard Alondes Williams is on pace to become one of the best single-season players in Demon Deacons history through his first 12 games. The Milwaukee native is averaging an ACC-leading 21 points per game, while shooting over 55% from the floor.

Williams, also known as “Man Man,” scored a new-career high 36 points against VMI, and followed up with 34 points versus Charlotte. He was also the first Wake Forest player since Jeff Teague, another former Atlanta Hawk, to score 30 points in back-to-back games.

Williams was named the Oscar Robertson National Player of the Week for those performances, the first ever Demon Deacon to achieve the award. He is also a versatile player, recording the first Wake Forest triple-double since NBA great Tim Duncan in 1997.

In addition to Williams, upperclassmen Daivien Williamson and Jake LaRavia have boosted the Deacs’ scoring totals. With the three combining to average 48.4 points per contest, Larrañaga knows his team’s defense must improve.

Miami will welcome Wake Forest to Coral Gables on New Year’s Day to open 2022. Tip-off for the Demon Deacons and Hurricanes is set for 6 p.m., and the game will also be shown on ESPNU.