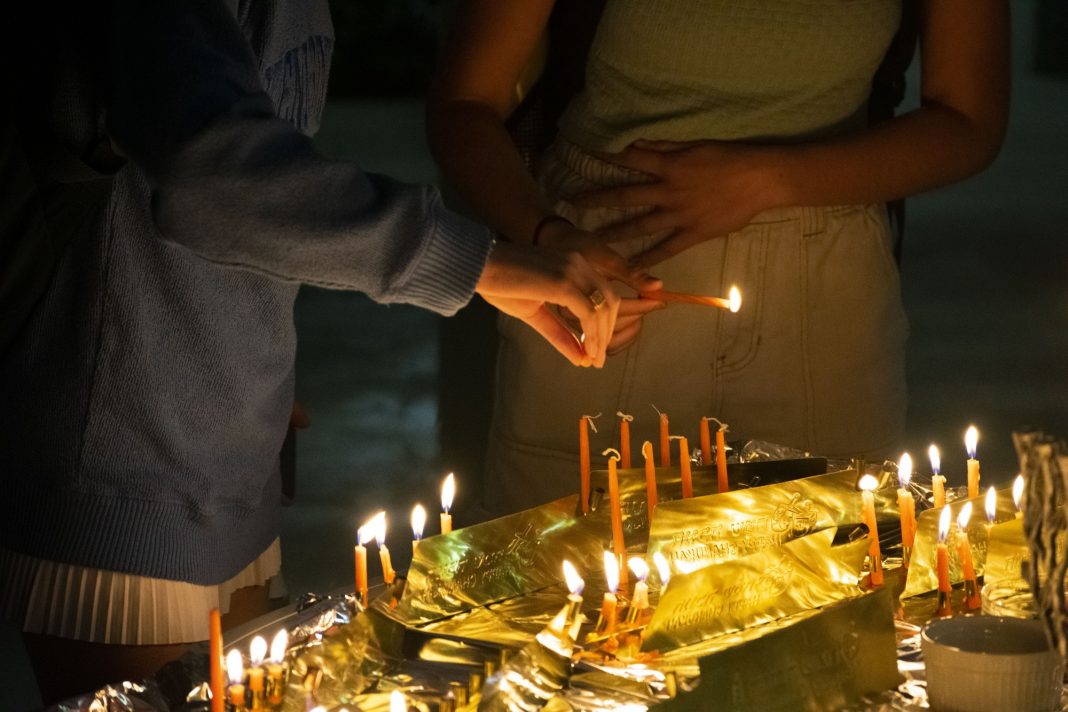 Jewish students at the University of Miami celebrated Hanukkah on campus for the first time since 2018 from Nov. 28 to Dec. 6, sharing seasonal meals, holiday traditions and religious ceremonies with their classmates ahead of winter break.

“Celebrating on campus is so much bigger than I thought it would be,” said Esther Cusnir, a sophomore industrial engineering major. “It is great seeing the Jewish community together as one.”

Hanukkah has overlapped with UM’s winter break for the last two years, preventing students from spending the holiday at the university.

The festivities began on Nov. 29, when Hillel and Chabad partnered to host a Giant Menorah Lighting on Lakeside Patio. Dr. Roy Weiss, chairman of the UHealth Department of Medicine, lit the menorah while hundreds of students enjoyed food and lit their own menorahs.

“It is so great to celebrate in the middle of campus,” Cusnir said, who is in charge of the UM First-Year Experience program. “It’s nice to get out of the Hillel and Chabad buildings.”

Since some on-campus housing does not allow lit candles indoors, both Hillel and Chabad held menorah lightings at Mahoney-Pearson and Hecht-Stanford Dining Halls. The organizations welcomed both Jewish and non-Jewish students to participate in the event.

“Jews and non-Jews alike were able to light candles for the first time,” said Nate Bergfield, a sophomore health sciences major. “It felt like a different type of family.”

Along with the menorah lightings, Hillel held a Hanukkah party on Nov. 30, where students joined in a white elephant gift-giving activity as organizers served latkes and grilled cheeses.

“We have a lot of students from a lot of different areas of campus,” said Rabbi Lyle Rothman, the campus Rabbi for UM Hillel. “It’s a wonderful expression of a really joyous festival.”

The final celebration occurred on Dec. 5 when Chabad held their Hanukkah party. At the party, they lit the giant menorah one last time and celebrated the end of the holiday by playing dreidel, a game where players spin tops in order to receive chocolate coins.

The event, which doubled as a fundraiser for Chabad, helped many students feel at home during their on-campus holiday season.

“This week helped me feel like I wasn’t missing something back home,” Bergfeld said. “It is a Jewish family no matter what.”