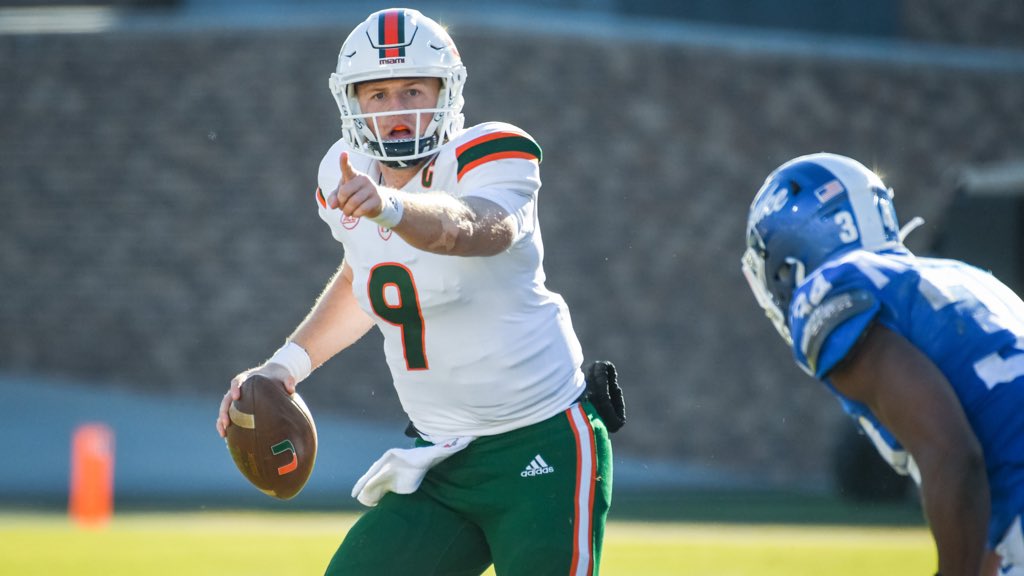 At the 8:37 minutes mark of the first quarter, Miami trailed Duke after a 94-yard kickoff return by Blue Devils sophomore Jaylen Stinson.

After, it was all Miami, out-gaining Duke by over 400 yards, and closing its regular season with a 47-10 win at Wallace Wade Stadium in Durham, North Carolina.

On a day that three student-athletes set program records, the Hurricanes flashed their offensive prowess. Miami combined for 530 yards of total offense, its second performance this month with over 500 yards.

“Duke came out in a totally different defense that we went through in film,” Hurricanes head coach Manny Diaz said. “For him to go for [349] yards, that’s incredible. That’s special.”

Van Dyke started Miami’s route with a 21-yard touchdown pass to freshman Xavier Restrepo in the first quarter, straight over the heart of the Duke defense. It was Restrepo’s first touchdown since Week 1, when he recorded a 29-yard TD against then-No. 1 Alabama.

After a Duke punt, Van Dyke led the Hurricanes on a nine-play, 70-yard touchdown drive, capped off by a Charleston Rambo 12-yard snag for the sixth score of the season for the Oklahoma transfer. On the catch, Rambo made history. His 73rd reception of the season gave him the most single-season receptions of any Miami Hurricane, passing Leonard Hankerson’s record set in 2010.

“I’m really excited about … what I did today,” the wide receiver Rambo said after the win. “In the history books, with the guys that are in there are big time names.”

Miami added 13 more points, after a Jaylan Knighton 3-yard touchdown run and a pair of Andy Borregales field goals to make it 30-10 at the half. The Hurricanes were sparked by a huge defensive improvement, limiting Duke to just 81 total yards, forcing it to four punts and a turnover on downs in the second quarter.

“It just felt like up front, we really got after them,” Miami head coach Manny Diaz said. “Once we dialed in after that opening series, they struggled to get back to the line of scrimmage. Our front four and our linebackers all played very well.”

Duke running back Mataeo Durant, who broke the Blue Devils’ single-season record against Miami, averaged just 3.1 yards per carry. As a unit, the Miami secondary held all Duke wide receivers to under 35 yards, despite missing safety James Williams and starting cornerback Tyrique Stevenson.

The Blue Devils failed two fake punts in the second half, and Miami was able to put the game out of reach. The Hurricanes scored another 14 points off of Duke’s fake punts, including an exceptional catch by Rambo, who snared a lob pass over Duke’s Jeremiah Lewis for his second score of the day.

“I told [Tyler Van Dyke] I didn’t see the ball,” Rambo recalled. “The ball was in the sunlight. All you can do is just pin that ball.”

From there, the Hurricanes were in cruise control. Running back Thad Franklin, Jr., scored his first career touchdown to close the fourth quarter, with Miami leading 47-10. That deficit would hold through the end, with UM shutting out Duke for the final 52:23 of the game.

In addition to the win came an incredible moment for fifth-year wide receiver Mike Harley.

Harley, who closed Miami’s Senior Day win with a 55-yard touchdown against Virginia Tech, recorded 13 receptions against Duke. With the catches, Harley overtook all-time Hurricane Reggie Wayne for the most career receptions in program history. Harley, who once considered quitting football due to mental health, responded to adversity, and now stands alone as the most catches by any Miami Hurricane, ever.

“Being lowest, letting the outside noise get to me … But all I knew was to work,” Harley said. “A lot of people don’t know this, but in the [indoor practice facility], we got Michael Irvin, and Ed Reed and all the guys from the past on the wall. I went over there and took a knee. I told myself … I’m going to leave here legendary.”

Regardless of Miami’s upcoming bowl game, Harley will leave Miami a legend.

The Hurricanes closed their regular season winning five of their final six games, to seal a 7-5 record on the season. While it wasn’t where many projected the Hurricanes to finish, and it does fall far below the standards set by coaches, players, and the fans of the program, there are many signs to have hope for next season.

Thanks to results elsewhere, Miami concluded the season at second place in the Coastal division. The Hurricanes will finish their season with a bowl game, the question now is when and where.