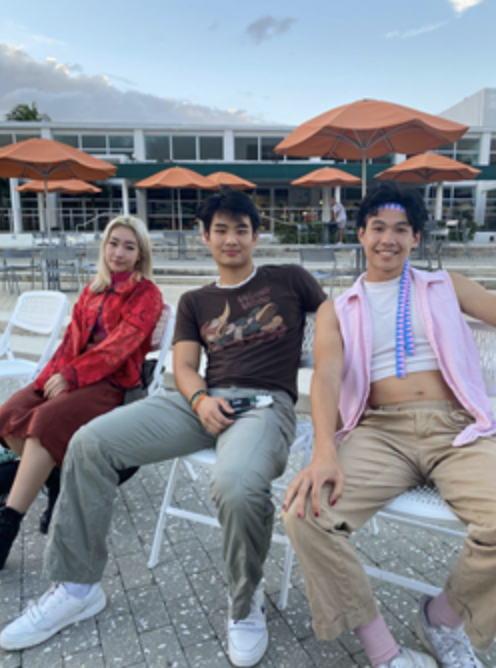 Anna Coon walked onto the UC stage Wednesday in her thrifted outfit — a blue dress from Plato’s Closet, a store that buys and sells gently used clothing, and tan wedges she found at UThrift.

Coon was one of 17 models in UThrift’s second annual fashion show, “Swap & Strut: Reuse the Runway.” They all wore second-hand outfits to promote the organization and its mission to make sustainable clothing fashionable during a half-hour showcase that began at 7 p.m.

“Shopping second hand is stylish, it’s not just a way to save money and help the environment,” said Coon, the group’s president.

UThrift was developed in the fall of 2017 as an ECO green initiative, Coon said, and became an official student organization in spring 2020. Former President Veronika Seider had the idea for a sustainable fashion show on campus a few years ago. The first fashion show was originally planned for the spring of 2020 but was postponed until November because of COVID-19.

That show alongside its pop-up with DIY jean painting restricted the number of models and spectators but was a success nevertheless, Coon said.

Haley Brathwaite, an intern at Debris Free Oceans and a sophomore marine affairs and political science major, gave a presentation highlighting how the clothing industry contributes to pollution.

“Thirty-five percent of the microplastics in the ocean are from clothing,” said Brathwaite, urging students to wear thrifted and second-hand clothing to decrease the amount of microplastics in oceans.

The models, all UThrift executive board members and other students, share a love for sustainable fashion, Coon said.

“I think one of my favorite things about thrifting is that you can get awesome clothes on a budget,” Jaden Kim, a junior jazz performance major, said. Kim wore pants from a thrift store in California, a top from UThrift and a vest he found at a Goodwill Superstore.

“I feel like a big misconception in fashion is that something needs to be expensive in order to have value,” Kim said. “Sustainability is also awesome, the fact that someday someone else could be wearing these clothes that I have.”

Anna Olszewska, UThrift’s outreach director and a sophomore legal studies and real estate major, said slow fashion, as opposed to fast fashion, is about slowing down fashion trends and bringing back retro styles.

“You can go to your mom’s closet and find something that’s authentic and second hand so that you don’t always feel left out of society if you don’t go to the mall every weekend,” Olszewska said.