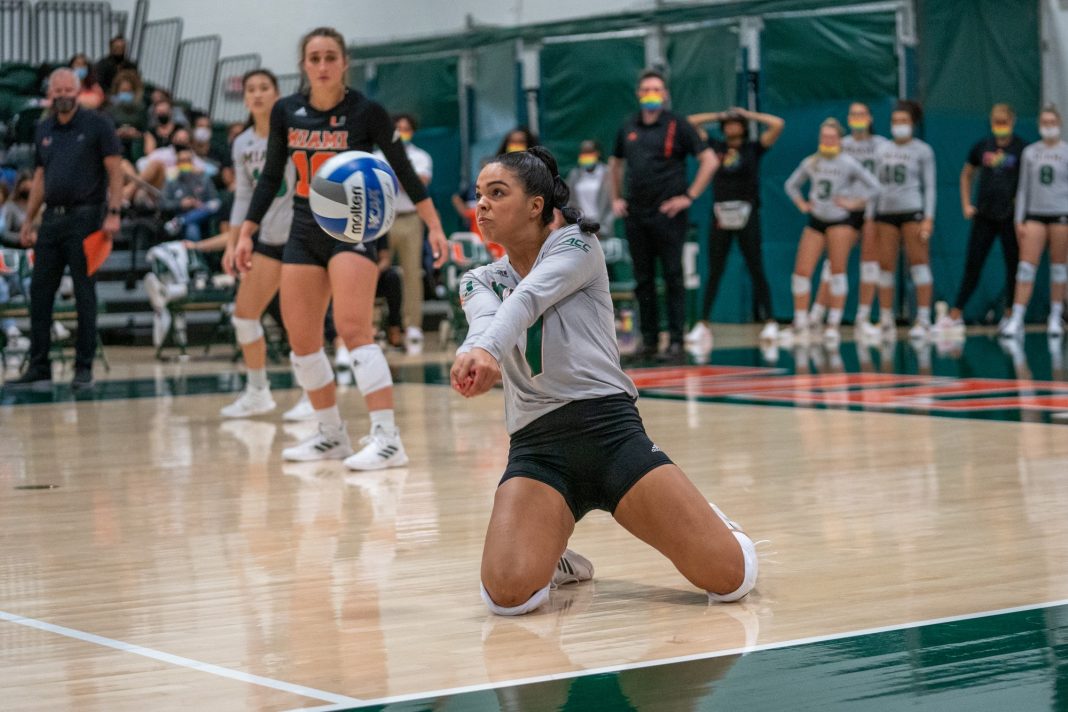 The victory helped the Canes (14-2, 5-1 ACC) solidify themselves at third place in the Atlantic Coast Conference, trailing only No. 2 Pittsburgh and No. 3 Louisville in the national American Volleyball Coaches Association (AVCA) poll. Now, after an initial loss at Louisville to begin ACC play, Miami has been rolling, winning five in a row.

Duke (11-5, 2-3 ACC), on the other hand, has found difficulty in replicating their early season success throughout their ACC schedule. As of late, they have struggled in conference play, losing three of five matches. All of which were 3-0 losses. Currently, they sit in the middle of the standings with a 2-3 ACC record.

Although Miami won in straight sets, the match was a tight contest.

The first set featured constant back-and-forth action, with 10 ties and four lead changes. Both teams refused to give way, each going on 5-0, and 4-0 runs throughout. When the match was tied up at 24 all, the Hurricanes finally broke away with a kill by middle blocker Janice Leao. The next play, defensive specialist Hanna Bissler recorded a service ace to secure the set, 26-24.

In the second set, Miami dialed in, posting a match-high hitting percentage of .517, along with 17 kills and three aces. After a 5-5 deadlock, opposite hitter Peyman Yardimci’s kill sparked a 9-1 Hurricanes’ run. Duke never led again, and Miami cruised to a 25-15 win to go up 2-0.

In the final set, the Canes continued their offensive dominance, posting an astounding .424 hitting percentage. However, Duke simply would not crumble. When Miami went on a 5-0 run to go up 9-5, it seemed certain the Canes would run away with the set. The Blue Devils stormed back with an 8-3 run of their own, which put them in the lead with a score of 13-12. From there, the match was evenly played through a 21-21 tie. Then, Miami went on a 4-0 run to win the match, which ended with a Duke attack error.

Overall, the ‘Canes had another stat-stuffing night. Offensively, outside hitter Angela Grieve — aided by Savannah Vach, who posted a match-high 36 assists — recorded a team-high 13 kills. On the defensive end, libero Priscilla Hernandez tallied 12 digs. Their only hiccup came with an unusually high amount of service errors, in which Miami had nine in the match as opposed to Duke’s three.

“For the first time in a while, it felt like the offense carried us a bit. Angela was excellent. Peyman was too. Janice and Savannah are playing at an All-American level right now,” head coach Jose “Keno” Gandara said. “Every single one of these girls has earned the right to win, and now, earned the right to have a couple days off to recover and prepare for practice next week.”

After a short one-game road trip, the Canes will now travel back home to face off against Pittsburgh at the Knight Sports Complex Friday night in a game with serious implications for the ACC tournament. At the moment, Miami sits just a half-game back from the Panthers and a win would give them a 6-1 conference record and a half-game advantage over their conference rivals.