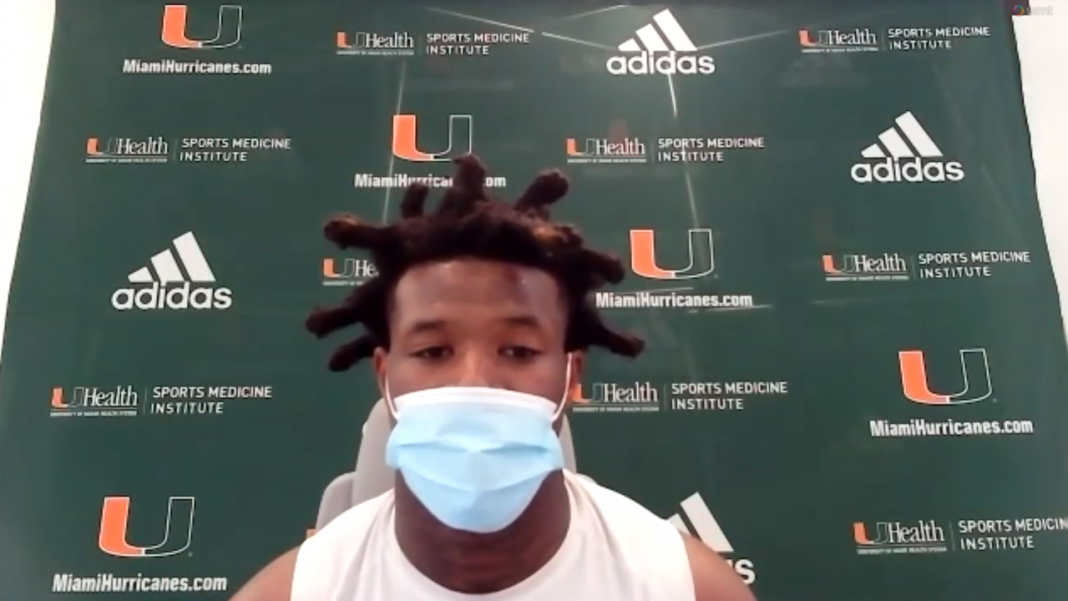 Avantae Williams, the top-ranked safety in the 2020 recruiting class, was reinstated to the Miami football program on Aug. 26 after three counts of aggravated battery against him were dropped. The first-year safety will provide a boost to the Hurricanes’ secondary after a summer that left his future with the program in doubt.2

Despite his reinstatement, Miami head coach Manny Diaz announced Williams will miss at least the first six games of the season – including the opener on Saturday against the Alabama Crimson Tide – and made it clear that the talented second-year freshman will have to meet certain expectations to resume full participation with the team. Among those, he will have to complete a conditioning program before returning to a fully-padded practice.

“There’s some things we want him to be able to accomplish that we think will help him, and by helping him that ultimately helps us as a football program,” Diaz said.

The former four-star recruit was with the team during the 2020 campaign but did not play a snap due to a medical issue flagged during the preseason. In March, Williams declared on social media he was fully healthy.

If Williams meets the benchmarks the coaching staff presents, he has the natural ability to be an impact player in the back-end of the Hurricanes’ secondary.

At the moment, the Hurricanes’ depth at the back-end of the secondary is unquestionably shaky. Starting safeties Bubba Bolden and Gurvan Hall Jr. have cemented themselves as mainstays at the position, with Bolden potentially being a candidate for All-American honors.

However, according to the Hurricanes’ recently released depth chart, the backups to the starters are both freshmen themselves in James Williams and Kamren Kinchens.

James Williams was a five-star recruit coming out of high school and Kinchens was a four-star recruit. Although the pair have clear natural talent and ability, it is common for freshmen at all positions in college football, especially in the competitive ACC, to go through growing pains in their first season at the collegiate level.

Avantae Williams, although still technically a freshman himself, was with the team in 2020 and gained valuable experience by being around the organization for an entire year. Even if he was not always practicing, being an active participant in the locker room and being able to understand the playbook would seemingly give him an inherent advantage over James Williams and Kinchens.

Six weeks into the season is where the Hurricanes enter the meat of their ACC conference schedule, meeting capable foes such as Virginia Tech, Pittsburgh, and rival Florida State.