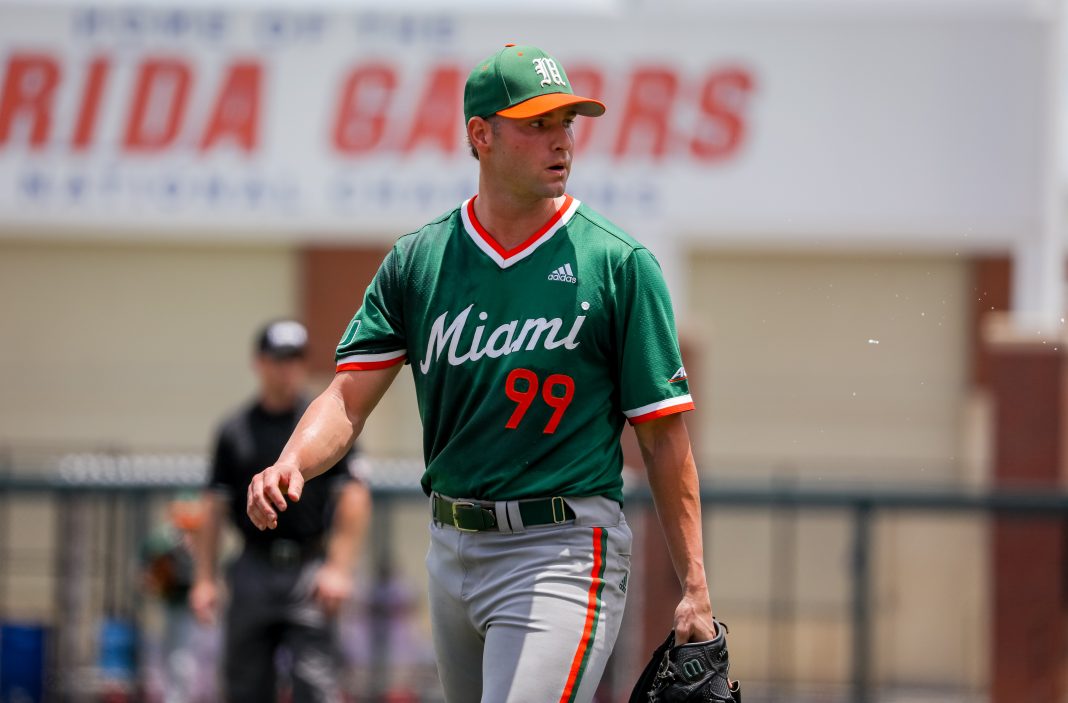 On February 21, the Miami Hurricanes opened their season with a series win over the preseason No. 1 Florida Gators at the brand new Florida Ballpark.

But Sunday, they walked off the same field as their once promising season ended at the hands of Sun Belt Conference foe South Alabama by a score of 7-2.

UM suffered a pair of losses to South Florida and South Alabama Saturday night and Sunday afternoon to be eliminated from the NCAA Gainesville regional. The defeats come only after No. 1 regional seed Florida—seen as Miami’s toughest opponent in the four-team grouping—was eliminated Saturday afternoon without even playing the Hurricanes.

“Disappointing ending,” said Miami head coach Gino DiMare. “But to be honest, it’s one that I didn’t not see coming. We weren’t playing good enough baseball to play at the level that you need to at this time of the season.”

DiMare said that the responsibility was on that him to ensure that the program is held to a higher standard than the one seen in Gainesville.

“Very unhappy, embarrassed,” DiMare said on his emotions. “Not even close to where this program is supposed to be.”

The third-year skipper said that he’ll be meeting with each player after the game and he will “be very honest with them.”

“It was an emotional game, both sides fought really hard,” Miami first baseman Alex Toral said. “I thought this year was the year we had a chance to kind of push forward, get ourselves out of this regional and put ourselves in a good spot. We hurt ourselves late.”

The Jaguars scored four runs via an RBI single and two homers in the third inning. Yohandy Morales and Toral responded with a pair of solo home runs in the fifth and six innings.

Starting pitcher Jake Garland allowed four runs in three frames on four hits and a strikeout. Federman went three and a one third innings pitched out of the bullpen, retiring all but two batters faced while striking out three to keep Miami in the game.

UM squandered a chance late to cut further into the deficit after Christian Del Castillo and Raymond Gil reached base to start the eighth inning, as Alex Toral flied out and Carlos Perez and Jose Izzara struck out to end the frame without a run.

For the team finishing 33-21 and 20-15 in the Atlantic Coast Conference, there will be soul searching in this weekend’s aftermath.

The Canes were unable to find consistency throughout most of 2021. Wins like the three-game series to open the season at Florida were followed by losses like the one suffered in a home series against Virginia Tech a week later.

UM swept Clemson and Duke at home in April but absorbed sweeps at the hands of Florida State and Pittsburgh. The Hurricanes went 7-1 in midweek non-conference games in the regular season but were unable to muster series wins in road ACC series at North Carolina and Boston College.

Miami swept Louisville to end the regular season before heading into the ACC Tournament with a No. 4 seed as the conference’s Coastal Division runner-up. UM departed the conference tournament however with an 0-2 record including its fourth loss of the season to FSU.

Del Castillo was the only everyday starter to bat over .300 in a lineup expected to consistently produce in 2021. Frequent leadoff hitter Jordan Lala hit just .229 on the season heading into the final day while Toral had just seven homers on the year, a far cry from his 24-home run output in 2019.

And of qualifying starting pitchers, only Jake Smith’s 3.45 season earned run average was below four on the year. Federman (4.40 ERA), Alex McFarlane (4.50 ERA), Victor Mederos (5.11 ERA), Alejandro Rosario (5.21 ERA), Jordan Dubberly (5.40 ERA) and Garland (5.40 ERA) also saw time in and out of a consistently changing starting rotation (all stats prior to Sunday).

“Didn’t just happen overnight, we were inconsistent most of the year. It was kind of all or nothing it seemed,” said DiMare.