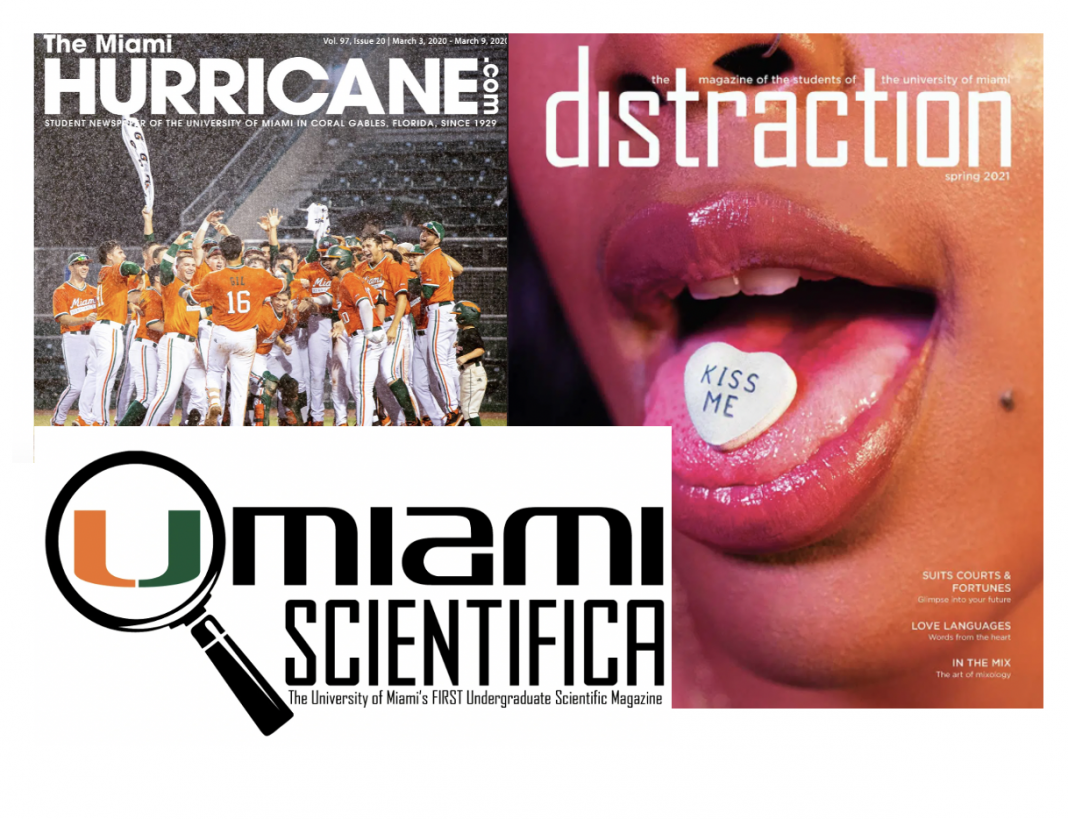 At the end of March, the Columbia Scholastic Press Association released the recipients of the 2021 Crown Awards. Three student publications at the University of Miami received this top honor from the CSPA: Distraction Magazine, Scientifica Magazine and The Miami Hurricane.

The Crown Awards are announced annually by CSPA and are chosen from their members. They evaluate each contestant for overall excellence in their respective categories. This year, there were 852 publications eligible for consideration. Of them, 42 won awards.

“I think it’s kind of like a time capsule—each issue represents what it’s like to be alive as a college student at a particular time and what was going on in that moment,” said junior Emmalyse Brownstein, the executive editor of Distraction Magazine.

For Brownstein, the magazine is made for students, but it’s rewarding to be recognized by such an established organization.

“It’s really nice to know that we’re doing good work,” Brownstein said. “It’s rare for a college magazine to be as professional as Distraction, and it’s a privilege that we have the support and means to publish it.”

“Our stories aim to make science accessible to a really wide population. We want anyone regardless of how much they know about science or how little they know to be able to pick up a magazine and learn about the world around them,” said Anuj Shah, a senior and the former editor of Scientifica.

As a relatively new publication on campus, only around seven years old, Shah is proud of the work he and his team have put into the magazine issues during his time at Scientifica.

“I think another one of the reasons the whole staff is excited about the Crown Awards and the Gold Circle Awards is because a lot of the stories we are reporting on over the past year and a half have been really important things happening, even locally, things like the opioid epidemic in South Florida and how COVID was affecting really at-risk populations here in Miami,” Shah said. “ So to see that CSPA and other groups appreciated that work, it was really meaningful to us.”

The Miami Hurricane also was a recipient of the Silver Hybrid News award, one of eight publications chosen for this award.

Editor-in-chief Anna Timmons noted the importance of this award to her and her team.

“Our writers, editors and photographers have continued to produce strong and impactful content during very difficult and draining times,” Timmons said. “Leading The Hurricane during this time has been an incredible honor, and I am so glad all of our hard work this past year to modernize and transform our paper has been recognized in such a meaningful way.”

Both Brownstein and Shah expressed their hope for the future and the success of their respective publications.

“I just want to see them continue to talk about issues that matter and really cover that intersection between technical science and stuff that is going on in our everyday lives,” Shah said.