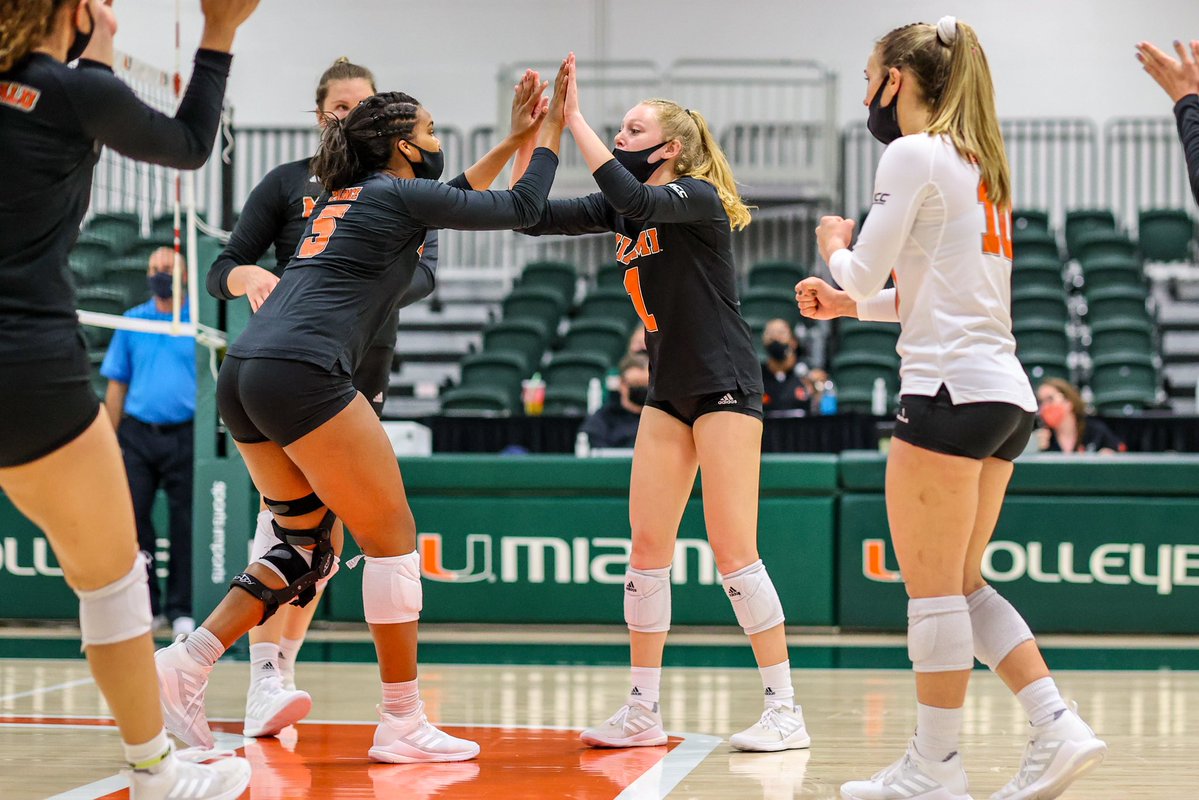 After four consecutive matches away from the Knight Sports Complex, Miami volleyball returned to Coral Gables with a 10-6 overall record to close out its last two matches of the season.

Miami began the road trip with a win over Duke in Durham, North Carolina on March 19, but proceeded to fall to Pittsburgh the following afternoon. They returned to the court on March 26 in Boston, Massachusetts, where they dropped a 3-1 decision to Boston College. The match resulted in the first losing streak of the season for the Hurricanes, but they quickly put an end to that narrative with a 3-1 match win of their own versus Virginia Tech Saturday afternoon.

Below are recaps of Miami’s final two matches on the road as the Canes look to finish an impressive season strong back at home:

The Hurricanes got off to a hot start in the opening set, leading by as many as five. With the score at 13-9, Boston went on a 6-1 scoring run aided by four Miami attack errors to give the Eagles their first lead of the set at 15-14. From that point forward, the set was Boston’s to lose.

Eagles outside hitter Katrina Jensen recorded three of her 13 total match kills in the second half of the first set and was instrumental to Boston’s set victory 25-21 over the Canes.

On Miami’s end, outsider hitter Angela Grieve paced the Hurricanes with five kills and outside hitter Elizaveta Lukianova recorded three to fuel the Hurricanes’ offense. While UM’s 10 kills on the set only trailed Boston’s total by two, Miami’s inability to keep the ball within bounds on offense proved to be detrimental to their efforts in the match opener.

The Eagles only committed two attack errors, which translated to a hitting percentage of .286, but the Hurricanes cancelled out their 10 kills with 10 attack errors.

Miami drastically improved throughout the second set, keeping their total attack errors in the single-digits and recording a match-high 16 kills on the set. Grieve and outside hitter Janet Kalaniuvalu took over for the Canes offensively, recording five kills each to lead Miami through a back-and-forth contest versus the Eagles.

UM and Boston exchanged points throughout the majority of the set, but the Eagles broke through the Miami defense with the score tied at 18-18. Three attack errors from the Canes and two kills by the Eagles put Miami at a five-point deficit.

Despite a 5-1 run by the Hurricanes to narrow the score to 24-23, a service error by Kalaniuvalu shut the door on the set and on Miami’s chances of evening the match score early.

Trailing 2-0 going into the third set, the Canes fought back with a sense of urgency, routing the Eagles 25-11 in a dominant offensive performance. Miami kept its attack errors to a match-low of three while recording 14 kills in 26 attempts, translating to a hitting percentage of .423.

Boston kept the score tight and led 7-5 early, but once the Canes took a lead, they never looked back. Miami went on a nine-point rally to lead 14-7, and proceeded to go on a 11-4 scoring run to blow out the Eagles in set three. Five UM players recorded at least two kills on the set, and a dominant defensive showing by the Hurricanes limited Boston to just five kills.

While the third set was the charm for Miami, they weren’t able to continue their momentum into the fourth and final set of the match. The Eagles rebounded quickly after previously being overcome by the Canes, keeping the score within a handful of points the entire set.

With the score at 21-21 following multiple ties and lead changes, Jensen struck again for the Eagles with two kills to lead Boston to a narrow 25-22 set victory and a match win.

An uncharacteristic 3-1 match loss to Boston on Friday was clearly committed to short-term memory for the Hurricanes. Miami concluded road play for the season with an impressive outing versus Virginia Tech, winning the match 3-1 and outscoring the Hokies 95-77 on the afternoon.

Grieve paved the way for Miami once again on offense, pacing the team with 19 kills. Lukianova followed closely behind with 18 and Kalaniuvalu recorded 15 to round out the match’s top three kill leaders.

The opening set saw the Hurricanes pounce on the Hokies right out of the gates and apply significant pressure on defense. Virginia Tech was held to a .114 hitting percentage on the set, and Miami was able to hold several rallies of at least three points to pad their lead early and often. By the set’s end, the Canes had converted half of their attack attempts to kills and decisively won the first set of the match by a score of 25-15.

The Hokies were much more productive and efficient on offense in the second set, nearly doubling their hitting percentage to .211, but the effort was still not enough to surpass the Hurricanes.

Despite Virginia Tech’s attempts to narrow the deficit, UM was able to mount three rallies of at least three points to continue widening its lead throughout. In the eight-point set win for the Canes, Grieve recorded six of Miami’s 17 kills.

The Hokies prevented the match sweep in the third set with a 25-20 win. While UM was able to post a respectable hitting percentage of .278, Virginia Tech’s offense emerged with desperation, posting a .424 hitting percentage and 15 kills. The Hokies also committed only one attack error, while adding two blocks and three service aces in an all-around strong set performance.

In the deciding set of the match, the Hurricanes were able to fortify their defense and keep the Hokies to their second-lowest hitting percentage of the match at .119. Miami also recorded five blocks and forced the Hokies to commit eight attack errors. Despite this, the Hurricanes only won by six points, a lead that was largely aided by a late six-point rally and 7-1 run.

Winning their final match by a score of 25-19, the Canes took their final road game of the season in a gentleman’s sweep. Miami will return to the floor on April 1 to take on the Louisville Cardinals at the Knight Sports Complex to begin their final two-match set of the season.