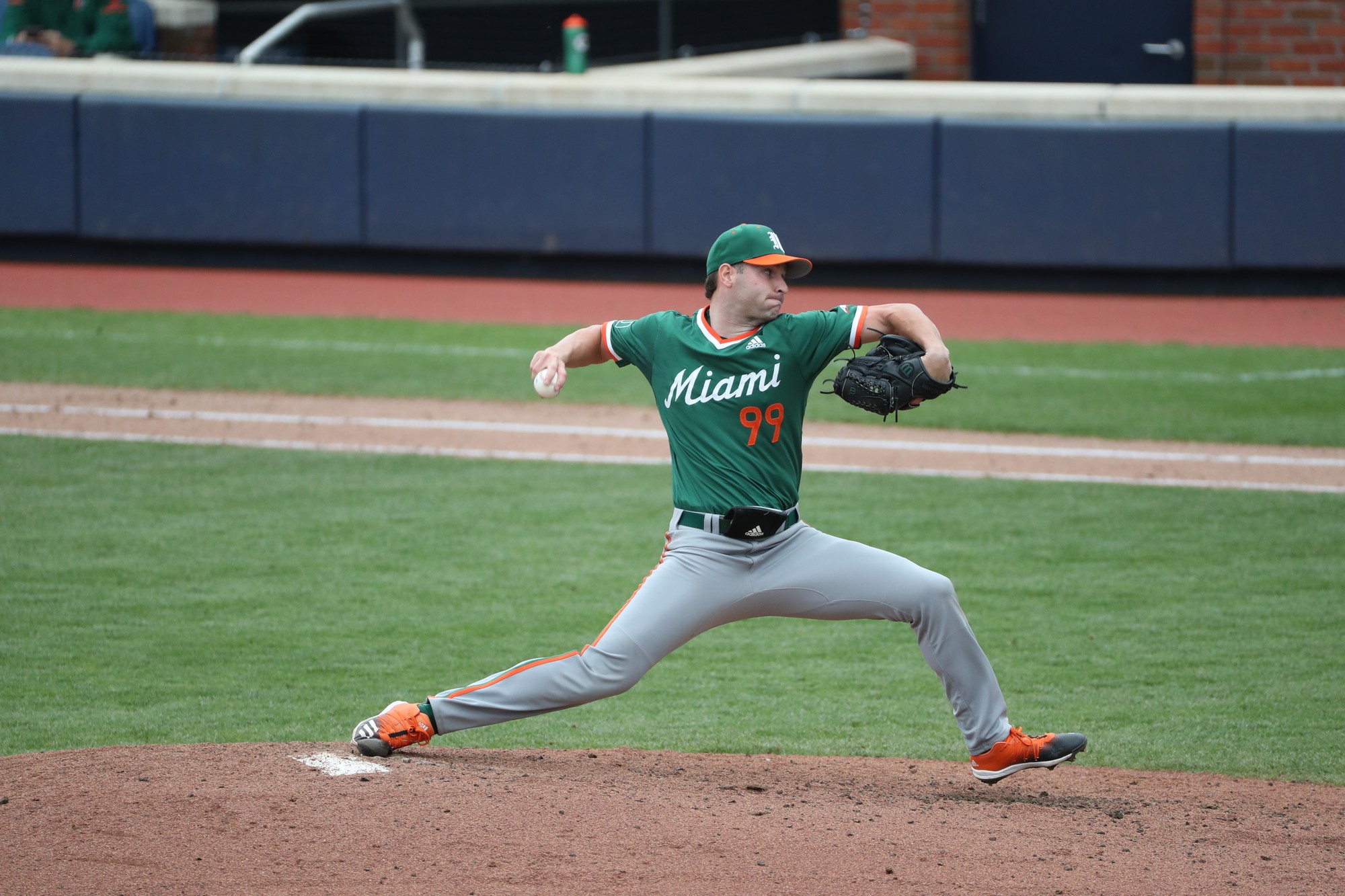 Going into Sunday afternoon’s action between the Hurricanes and the Cavaliers, it was unknown whether baseball would be played in Charlottesville. The series finale between Miami and Virginia was initially scheduled for a 1 p.m. first pitch, but was then changed to a 10 a.m. start time due to inclement weather in the forecast. A hazy, rainy morning then pushed the game to 2 p.m.

Right out of the gates, the Canes were aggressive on the base paths and were able to put a run on the scoreboard despite not recording a hit in the inning. Leadoff man Jordan Lala reached base on a fielding error and advanced to second on a wild pickoff attempt from Virginia starting pitcher Mike Vasil.

Lala then moved to third on a groundout to second from Anthony Vilar, and scored on a sacrifice fly from Yohandy Morales.

Both teams remained quiet offensively through the top half of the fourth inning, but the Cavaliers broke through Miami starting pitcher Jordan Dubberly to tack on a run and tie the game in the bottom half of the frame.

Virginia shortstop Nic Kent led off the inning with a double to left and was brought in to score off of a two-out RBI single from Cavalier cleanup hitter Brendan Rivoli.

UVA broke the tie and scored a second run the following inning when a throwing error from Dominic Pitelli brought Virginia first baseman Devin Ortiz in to score. Ortiz reached base on a two-out double. While Virginia’s go-ahead run was scored with Daniel Federman on the mound for Miami, the unearned run was charged to Dubberly. In 4.2 innings of work, Dubberly struck out four hitters while allowing three hits and one earned run.

In the top half of the sixth, the Hurricanes tied the game with a single, sacrifice bunt and single sequence. They broke the tie in the seventh with a three-hit attack on Vasil. Christian Del Castillo got on board with a base hit and advanced to third on a single from Alex Toral. With runners on the corners, a sacrifice fly from Raymond Gil brought Del Castillo home to give the Canes on 3-2.

Miami then added an insurance run with a Morales solo shot to give the Hurricanes a 4-3 lead. Morales’s fifth long ball of the season pulled Vasil out of the game after seven complete innings.

On the mound for Miami, Federman blanked the Cavaliers in his 3.1 innings of relief. He struck out five while allowing three hits. Carson Palmquist assumed the pitching responsibilities in the ninth and secured the Hurricanes win with a one-two-three inning to earn his seventh save of the season.

With a series victory over Virginia, Miami has won three of their last four games dating back to Tuesday’s game over FAU. The Hurricanes will now fly home to take on the FIU Panthers on March 31 for a midweek game before taking on the Duke Blue Devils at Mark Light Field next weekend.