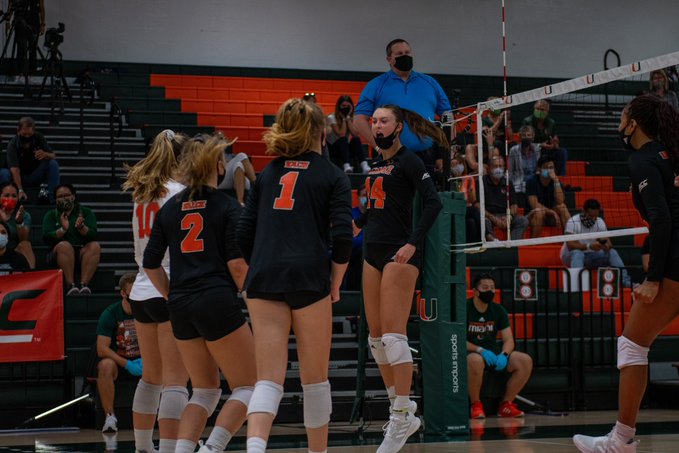 The Miami Hurricanes brought out the brooms for the second time in as many days to wrap up a two-match weekend set versus the Virginia Cavaliers Sunday afternoon. After splitting last weekend’s matches with a win over North Carolina State and a loss to Notre Dame, Miami’s rout over Virginia propelled them to an 8-4 overall record for the split season.

When the Canes returned to the floor on March 6 to take on NC State, they entered spring play with an impressive 5-3 overall record and eight conference matches under their belt dating back to last fall. With several conferences around the country opting out of play in the fall due to the pandemic, the Canes were forced to play an unusually small sample size of matches against conference rivals exclusively.

Going into an unprecedented fall season, Miami’s schedule figured to be a challenging one, especially considering they went 6-12 against ACC opponents in the 2019 season. However, the Hurricanes proved to be a resilient, consistent force within the conference and remained a top-15 team in the country all semester. As perennial underdogs, Miami was motivated by one core value to drive their success: toughness.

“Toughness for Canes Volleyball is simply being good anyway, and our team is good anyway,” student assistant coach Cameron Dobbs said. “They’re good despite going through all of COVID, being out of the gym for months on end, and then coming back super strong in the fall and consistently being ranked a top-15 team.”

The underdog narrative proved to be no different for Miami as spring play approached, and the Hurricanes were snubbed from the American Volleyball Coaches Association (AVCA) top-25 rankings. With few exceptions, most of the teams featured on the AVCA rankings had yet to play a match in over a year prior to the spring.

“Seeing us not on the top 25, we wondered why, but at the same time there’s nothing really you could do but win to say, ‘Hey we deserve to be here,’” junior defensive specialist Priscilla Hernandez said. “The ultimate goal in my eyes is to make the NCAA tournament. I think that’s everybody’s goal. The tournament is what matters to me and it proves who is meant to be there.”

Looking to re-establish themselves as a legitimate contender in college volleyball, Miami embarked on its 10-match second-half schedule with a sense of purpose. Their spring opener was a tightly contested battle versus the NC State Wolfpack that ultimately resulted in a 3-1 match win for the Hurricanes, but they dropped their second match to Notre Dame 3-0.

Below is a recap of the Hurricanes’ two-match weekend sweep over Virginia, which puts Miami in excellent position to finish the season strong with six matches remaining on the schedule.

The Hurricanes scored early, often and never let their guard down in their weekend series opener versus Virginia Saturday afternoon.

In three matches that combined for roughly 90 minutes, Miami pummeled Virginia, winning all three sets by at least eight points. The final two sets were both won with 10-point differentials between the Canes and the Cavaliers.

The match opener saw Miami take an early lead over Virginia that would never falter, despite the Cavaliers keeping their deficit within a handful of points for much of the set. Miami gained momentum with time, however, and began piling up points in small bunches to expand their lead to six for the first time at a score of 20-14. After surrendering a kill to Virginia outside hitter Sarah Billiard, Miami scored three consecutive points off of kills from outside hitters Janet Kalaniuvalu and Angela Grieve to bring the game out of reach for Virginia.

The Cavaliers fought back to narrow the deficit by two points, but outside hitter Elizaveta Lukianova’s sixth kill of the set sealed the deal at a score of 25-17 in favor of the Hurricanes.

In the second set, Miami got off to another red-hot start with an early 5-0 lead as Virginia struggled to translate attack attempts into kills. UM lead by as many as seven at a score of 8-1 before the Cavaliers began narrowing the margin, but Miami continued to dominate Virginia’s defense and force them to commit attack errors.

Set two was the Hurricanes’ best offensive one of the match, and Miami hit 11-for-21 on the set to blow out Virginia 25-15.

The Hurricanes replicated their start in the second set in the final set by exploding for five quick points right out of the gates. Lukianova contributed two back-to-back kills during the offensive outburst.

As was the case in the previous set, Virginia inched back by capitalizing on Miami’s errors, but the comebacks continuously fell short. The Cavaliers got as close as two points away from a tie at 14-12, but Miami scored in bunches once again to run away with the set and match victory.

En route to their final set victory, Miami outscored Virginia 11-3 to stun the Cavaliers with another 25-15 victory.

On the afternoon, Miami outperformed Virginia in every major offensive and defensive category, and by a long shot, including aces, blocks, assists and digs.

Match 2: Lukianova and Grieve combine for 34 of Miami’s 46 kills to steal weekend finale from Virginia

The Hurricanes picked up right where they left off Sunday afternoon versus the Cavaliers with a dominant 25-14 set victory, their best of the weekend.

Contrary to Saturday’s match, Miami actually trailed for a portion of this set by as much as three, but eight kills from Lukianova and six points from Grieve allowed UM to roar back on offense and win by a comfortable 11 points.

Going into the second set, Miami had more of a sustained offensive rhythm and held a lead throughout the entirety of the set. The Lukianova-Grieve tandem combined for 10 kills, outside hitter Taylor Burrell added three and setter Savannah Vach tallied 13 assists to carry Miami over the hump with a 25-19 win.

The match finale was one of desperation for the Cavaliers, who have lost their last five match sets to the ‘Canes. With the match and series on the line, Virginia put it all out on the floor and delivered a performance that saw them fight toe-to-toe with Miami throughout the set.

The point differential never exceeded four throughout the set, and Miami actually trailed by a point twice after both teams had reached the 25-point mark. As the game winded down to a close, a service error on Virginia’s end tied the game for Miami, and a service ace from Grieve and an attack error from Virginia outside hitter Christine Jarman shut the door on the match. The Canes won the set 29-27, solidifying their match and series sweep.