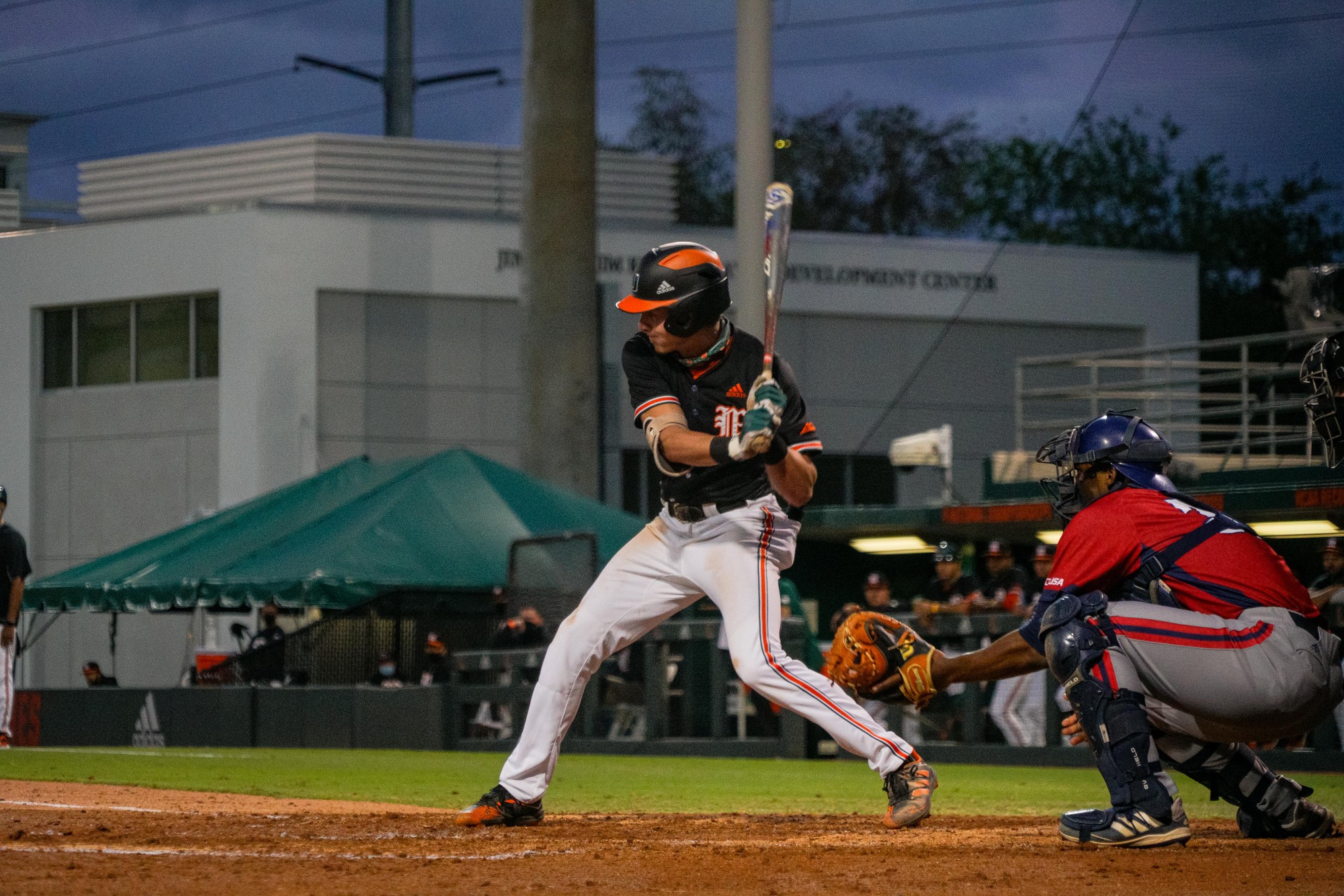 In an 11-2 victory of the Florida Atlantic University Owls at Mark Light Field, Anthony Vilar and Adrian Del Castillo logged three RBI, while the duo plus Christian Del Castillo smashed four hits each. It was No. 8 UM’s first mid-week game of 2021 and one of just 12 non-conference tilts in an Atlantic Coast Conference-heavy season schedule.

Miami batted a season-high .323 as a team and hit .400 with runners in scoring position. With both the bases loaded and with a runner on third with less than two outs, UM hit 1.000. The Hurricane leadoff hitters also went a combined 4-8.

“It’s been a while since we’ve gotten our bats hot like that as a team,” said Adrian Del Castillo, who spent the night as the designated hitter spot rather than in his normal catching duties.

The Hurricanes (6-4, 2-2 ACC) rolled out a new starting pitcher, giving second-year righty Jake Garland his first career start. Garland’s six-inning performance was impressive, allowing just one earned run, two hits and no walks over an efficient 64 pitches. He struck out three Owls on the evening.

“I’m not a very big strikeout guy so I just have to work in my zones and pitch the way I pitch, and let them get themselves out,” said Garland. “Felt really good where my pitches were. Fastball [and] changeup was working.”

Fifth-year senior TJ Stuart started on the mound for No. 20 FAU, his second start in 2021 after throwing four frames last week at UF. Unlike Garland, he didn’t last. Miami chased Stuart after just three and 1/3 innings pitched. The transfer from Manhattan College allowed five runs, all earned, while surrendering three hits and three walks.

While the home contest against the local mid-major squad may have jumped off the page as a more casual likely win to many fans, the Owls came into Coral Gables as a proven top 25 team. They are a week removed from a win at Florida and entered Tuesday with an 8-2 record.

The Owls opened the scoring in the first inning when B.J. Murray drove in Wilfredo Alverez from third base on a sacrifice fly. The Canes made it 2-1 in the third though an Vilar RBI groundout, scoring Tony Jenkins, along with a Yohandy Morales groundout, scoring Jordan Lala.

UM blew the game open in the fourth with a five-run frame. CJ Kayfus scored from third base on a wild pitch, Vilar had a single that drove in Dominic Pitelli, Morales drove in Jenkins on a sacrifice fly, and Adrian Del Castillo capped the inning with a three-run home run to right field. Kayfus made it 10-1 Miami with a solo shot in the fifth. And Vilar made it 11-1 with his third RBI, scoring Lala.

Jordan Dubberly, Jake Smith and Nicholas Regaldo finished for the Hurricanes out of the bullpen, allowing just a lone late Owl run combined.

The Canes are slated to be back in action this weekend for a three-game home series against Wake Forest. Friday’s first pitch is scheduled for 7 p.m.