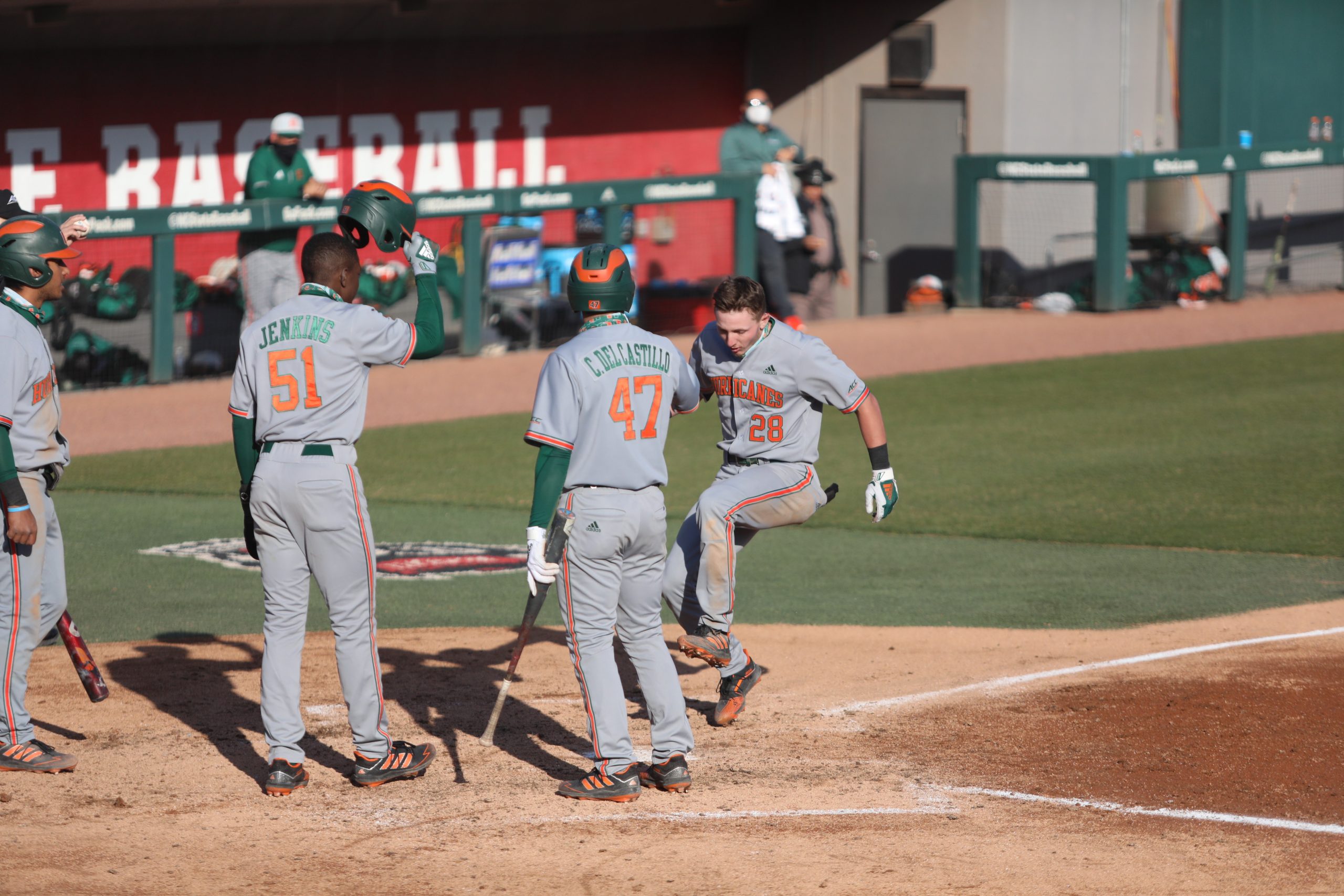 A slight sense of concern had begun to simmer in the Miami clubhouse leading up to the series against North Carolina State in Raleigh, North Carolina this past weekend.

That concern only mounted after the Hurricanes allowed two four-run innings to the Wolfpack in an 11-5 disaster loss on Friday afternoon, as Gino DiMare’s team tried to recuperate and avoid another series loss.

Having only relinquished three hits all season, freshman closer Carson Palmquist held the Wolfpack scoreless through two-straight innings while walking just one batter to seal the deal 6-4 on Saturday. The Fort Myers, Florida native then locked down the NC State lineup in the rubber match, striking out three of seven hitters in the come-from-behind 6-4 win.

With Palmquist’s fourth save on the season already, many around the Miami ball club have a valid reason to believe that this is their go-to closer after an impressive debut last season, allowing four runs through 11-and-two-thirds innings of relief work. Having added weight and velocity over the winter, the left-hander will remain vital to the Hurricanes’ late-inning rallies as conference play progresses. Pitching coach J.D. Arteaga evidently saved the best for last in the second and third contests this weekend, as the southpaw now holds an opponent batting average of .103.

A ballgame tied at four runs apiece in Game 2 saw an almost unexpected twist, as freshman first baseman CJ Kayfus launched a solo shot, his first as a Hurricane, to left center field for the go-ahead run in the eighth inning. That gave the Miami bats the much-needed boost in order to edge the Wolfpack and keep its ACC series victory hopes alive and well, asserting how the hitting spotlight may not always illuminate on some of the nation’s best hitters in first baseman Alex Toral or catcher Adrian Del Castillo.

An impressive seven-inning outing in the Canes’ only win over Virginia Tech last Saturday did not equate to freshman starter Alejandro Rosario striking out seven or only allowing three hits this time. Though the freshman had settled in towards the middle innings, the three earned runs allowed bared that the freshman’s off-speed still requires some fine tuning, likely galvanizing Rosario to emerge with a vengeance versus Wake Forest this coming week while battling the transition to the college level.

After relinquishing four earned runs to Virginia Tech which culminated in a spiked ERA of 5.06, freshman starter Victor Mederos dug Miami a hole of its own, trailing 3-0 after the first five frames on Sunday. Mederos’ struggles to maintain composure may appear very real, though the resiliency of the team has shined even brighter. Freshman reliever Anthony Arguelles entered at the end of the sixth inning and struck out two batters after graduate transfer Ben Wanger prevented NC State from tacking on additional runs.

Similar to the Sunshine State rivalry in Gainesville, Florida, the final two games of the weekend illustrated the closest to the best play Hurricanes fans have seen all season. A sixth-inning explosion from the bats of freshman infielders Yohandy Morales and Anthony Vilar to put away the Wolfpack gave some college baseball experts across the nation the impression that the series could serve as a turning point when it comes to momentum; DiMare thought it was a clean-played game that featured a prepared bullpen and consistent defense.

Saturday and Sunday inside Doak Field at Dail Park represented two gritty wins for a Miami team that appeared to have lost a significant amount of momentum after what had transpired in both the series loss to Virginia Tech and the 11-5 opener to NC State on Friday. Whether or not the Canes can actually sweep an opponent in one of the deepest conferences in the country remains a major question at hand.

The Hurricanes face a stern challenge Tuesday when Florida Atlantic comes to Coral Gables for UM’s first midweek test of 2021. The Owls are ranked No. 20 in D1 Baseball’s top 25. They boast series wins over Central Florida, Seton Hall, and two wins out of three against Florida Gulf Coast. Most notably, FAU beat Florida in Gainesville in 10 innings last Wednesday.

Five Owls are batting over .325, including two over .350, led by outfielder Mitchell Hartigan hitting .375 over 10 starts.

Miami announced that Jake Garland will be the starter to counter the powerful FAU lineup. The Owls, meanwhile, will likely go with a pitch-by-committee approach like they have in their two prior midweek contests. But FAU has only surrendered a combined 1.42 ERA in midweek matchups so far in 2021.

Welcoming Florida Atlantic and Wake Forest for a four-game home stand, Miami will have the conference’s full attention as the ball club seeks to sustain its momentum and potentially sweep an ACC adversary that returned seven starters from one of the nation’s top offenses. Having paced the ACC with 7.8 runs per game, the Demon Deacons will likely remain the Canes’ most challenging league opponent thus far in 2021.

Dropping two spots to No. 8 in D1 Baseball’s rankings, the team focuses on at least taking two of three from Wake Forest.