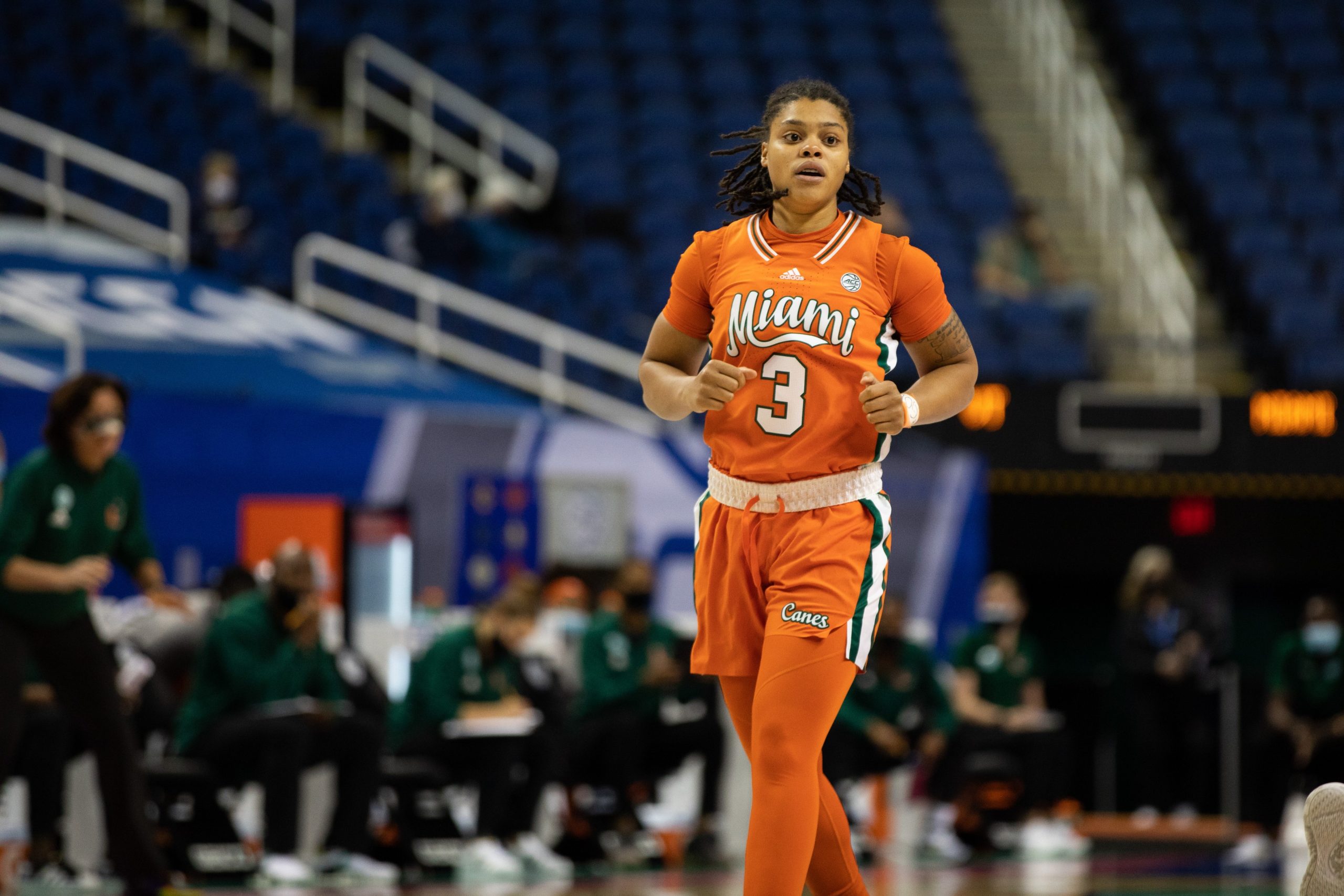 Carrying a three-game win streak to Greensboro, North Carolina — the second longest active win streak in the conference — Miami (11-11, 8-11 ACC) was prepared to battle Virginia Tech (13-8, 8-8 ACC) after falling to the Hokies by 20 points at home on Feb. 11.

Redshirt junior forward Destiny Harden scored 27 points, sophomore guard Moulayna Johnson Sidi Baba added 13 in the second-half, yet the No. 10 seeded Hurricanes were not able to outlast the Hokies in the second round of the ACC Tournament on Thursday, losing 72-64.

Without Hokies guard Aisha Sheppard in the second half, Virginia Tech ignited an 11-0 run in the fourth quarter and held Miami to 38 percent. UM out-rebounded Virginia Tech 35-21.

“Just a really disappointing start,” Miami head coach Katie Meier said. “That’s a team that can score in bunches and we didn’t defend them well at all in the beginning of the game, but they’re really good, too. I mean I gotta give them a lot of credit because they hit some incredible numbers in the first quarter there, percentage wise. But I thought there was a four-inch difference of effort on the defensive end for sure, and when we took those four inches away, they started missing a little bit.”

Without the scoring and leadership of senior guard Kelsey Marshall, who suffered a leg injury on a layup attempt versus Clemson on Sunday, Miami lacked its balanced scoring attack as the Canes trailed by 21 points with under three and a half minutes remaining in the third quarter.

“Even with the loss of Kelsey, I thought we would play Miami ball,” Meier said. “I am fine with [the game’s outcome] as long as we are competitive. We waited too long, and I told the team in the locker room that this program needs to get to where we’re the team that’s the frontrunner and the other team is trying to make a miraculous comeback because that’s what we’ve been, and we need to get back there. We shouldn’t be down that much, I’m too proud for that and this program is too proud.”

A recent ACC Player of the Week honoree, Harden carried over her best level of play from February to March having averaged 14.9 points, seven rebounds, and over 58 percent shooting as the regular season concluded. The former West Virginia transfer played 39 minutes on Thursday.

“When other teams get a little bit tired, Destiny just keeps working and keeps working, and she gets a couple of hustle points, and that gets her confidence up,” said Meier on the guard’s 19-point showing in the second half. “I barely had her off the court, she’s a true Hurricane. That kid is everything we talk about when you talk about what it is to be a Hurricane. We can be down, we don’t get frustrated, and we keep working. A lot of it has to do with her strength and conditioning, and I think Brandon, our strength and conditioning coach, has done a phenomenal job because we’ve really, really had to play hard this year.”

Virginia Tech center Elizabeth Kitley and guard Georgia Amoore, who both burned Miami in Coral Gables, Florida in the teams’ previous meeting, were prepared to counter the second-half scoring Harden.

“We just weren’t talking on the defensive end, I think that really killed us,” Harden said on the Canes’ defensive struggles in the first 20 minutes. “We knew their players, we knew their plays going in, we just had to guard one-on-one. Their guards went off on us, we were focused a lot on Kitley but the guards ran a lot of isolation and our guards were not alert in the first half, so they got a lot of plays going off the bounce.”

The Hokies closed the first quarter on a 7-0 run and widened their lead to 16 points off a 3-point play from guard D’asia Gregg with 3:15 remaining in the fourth frame.

Sidi Baba converted on a 3-point field goal to slice the opponents lead to seven as 38 seconds ticked down, though that advantage remained too large to overcome.

“I’m very proud of my team,” Harden said in reflection of her team’s performance on the season. “Just a lot of adversity, we fought through everything throughout the pandemic. Nobody had any positive [COVID-19] results back, we’re just going to bounce back no matter if we have more games or whatnot. I’m so glad I’m with this program, I’m so glad our coaching staff kept pushing us every single day and the players wanted to get better every single day. So, nothing to be mad about with my teammates; we just fell short today.”

Miami has appeared on the NCAA Tournament Bubble prior to its ACC Tournament loss, given its established momentum at the end of the regular season which featured a win over Wake Forest. The team remains one of the next four teams out, per ESPN analyst Charlie Creme.