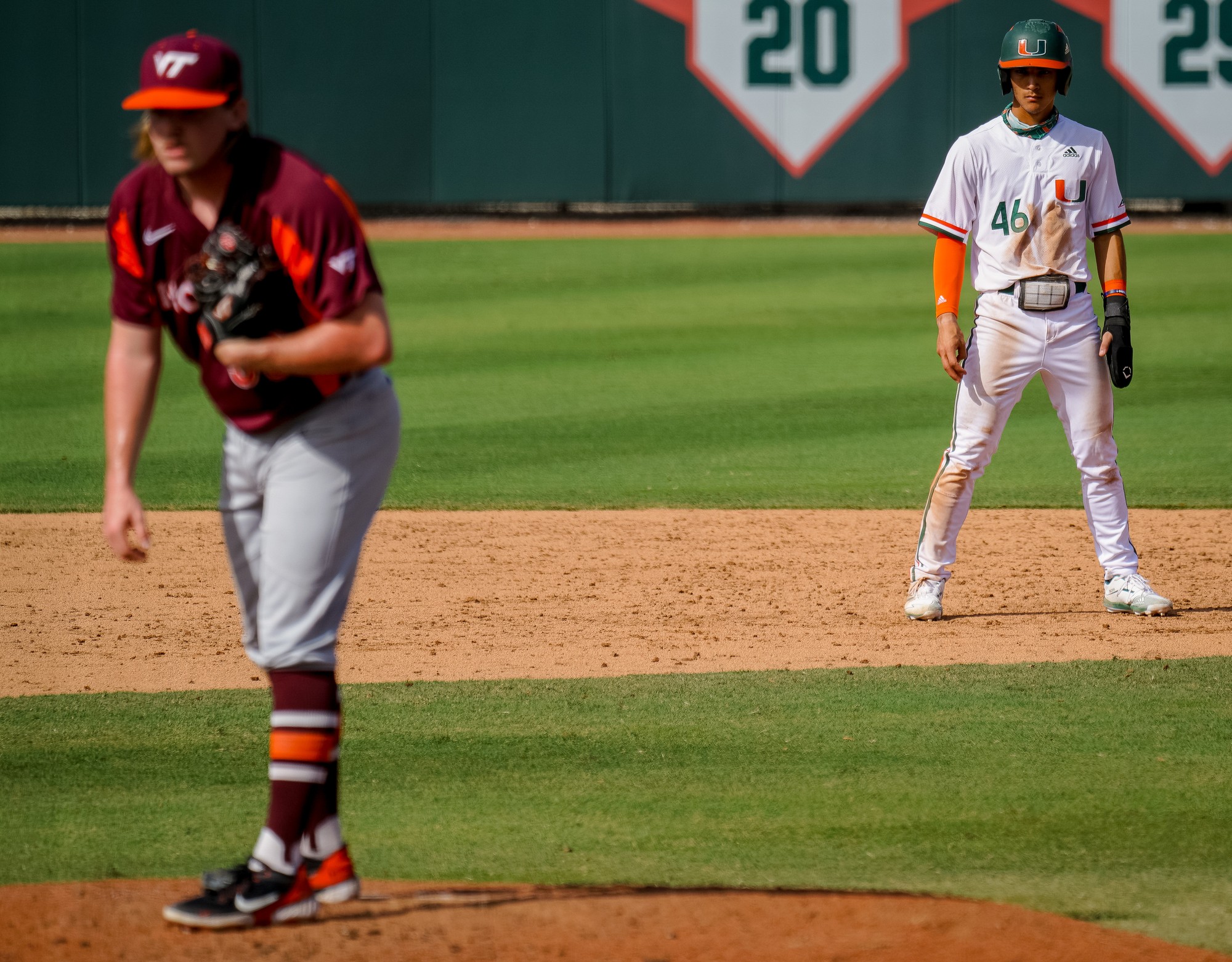 Just hours after being blanked by Alejandro Rosario and Miami on Saturday night, the Virginia Tech Hokies retaliated in roaring fashion to steal Sunday’s series finale 9-6.

With the win, the Hokies took the series victory over the Hurricanes for the first time since 2012 and the Canes drop to 3-3 and 1-2 in the ACC so far this season.

Miami once again pounced on Virginia Tech’s pitching early, tallying two runs off of a Yohandy Morales moonshot that just crept over the wall for a home run. The first long ball of the freshman’s college career also extended his hit streak to four games, which includes all three outings versus Virginia Tech and the opening weekend finale versus Florida.

The Hokies quickly answered back in the next half inning when a two-out single from Tanner Schobel drove in Tanner Thomas to split Virginia Tech’s deficit by half. Schobel, who would ultimately pace the Hokies’ nine-run outburst with four runs batted in, snapped a scoreless stretch for Virginia Tech that spanned over 17 innings.

Throughout the next two frames, Miami worked Virginia Tech starter Anthony Simonelli deep into his pitch count, but they struggled to pad the lead any further. The Hokies, however, continued to attack Miami’s starting pitcher freshman Victor Mederos and broke through with a game-tying solo shot off the bat of Fritz Genther.

The game remained a pitchers’ duel through the rest of the third and fourth innings, but UM mounted a rally deep into the top half of the fifth with the bags loaded and two away. Miami chased Simonelli from the game after 94 pitches and forced Virginia Tech to resort to their bullpen for the remainder of the game.

Southpaw Henry Weycker assumed the pitching responsibilities for Virginia Tech to face left-handed Christian Del Castillo, but Del Castillo pulled a go-ahead single to give Miami its second two-run lead of the afternoon.

With Miami leading 4-2 going into the sixth, the Hokies responded with a two-run inning of their own with a Tanner Schobel two-RBI base knock, and the Canes returned the effort once more in the bottom half of the sixth. RBI singles from Miami’s two and three spots in the order – Anthony Vilar and Morales – reestablished Miami’s lead at 6-4.

However, the rest of the game was all Hokies. Virginia Tech put five unanswered runs on the board in the seventh and eighth to close the game and hand Miami its second loss in three days and a series loss for their first home set of the 2021 campaign.

“They had a lot more energy than us the whole weekend, and we had to pick it up,” Vilar said. “We scored early. We scored in the first inning every game, and then we just stopped scoring, and they had the energy to fight back.”

Once Mederos was removed from the game after 5.2 innings of four-run ball, Miami turned the ball to five different pitchers to record the remaining 13 outs of the game. Of those five arms – Anthony Arguelles, JP Gates, Ben Wanger, Jordan Dubberly and Jake Smith – only Dubberly faced more than five hitters. In 1.2 innings of work, he allowed two runs that both scored off of a homer from Gavin Cross in the eighth.

Virginia Tech used four arms out of the bullpen, but they combined to allow two earned runs on the afternoon while Miami’s pitchers allowed five.

Plenty of baseball remains to be played for the Canes, but a disappointing series loss at home certainly stings after an impressive showing last weekend against the top-ranked Florida Gators.

“It’s obviously a bad feeling coming here for the first weekend at The Light and losing a series to Virginia Tech,” Morales said. “So, we’re just going to move forward after today, we’re going to wear it today and keep moving forward. There are many more games to come.”

Miami will get their next chance at the action on Friday, March 5 when they take on the North Carolina State Wolfpack to kick off its second road trip of the season. Through six games, the Wolfpack are 2-4 and have dropped their past four contests.