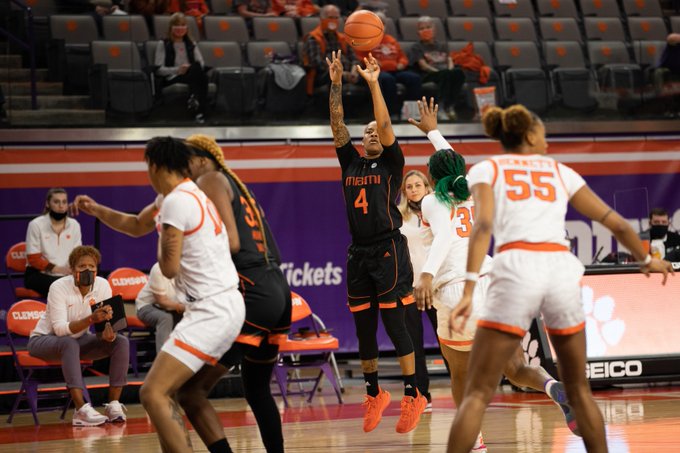 Defeating the Clemson Tigers once to ring in 2021 was not enough to satisfy the Miami Hurricanes women’s basketball team, which sought a season sweep over its conference opponent on Sunday.

The team’s third road win of the season kept a three-game winning streak alive, a mark Miami has yet to have reached all season.

“Pretty, ugly, disjointed, that was the game” Miami head coach Katie Meier said on the changing course of the contest. “With Clemson, you can’t lose your faith because they disrupt everything you want to do. They play so hard.”

The Canes answered a 13-0 run with an 8-0 burst of their own by the halfway point of the third period and shot 45 percent on the afternoon, the third-straight game they have achieved such number.

“Clemson is a very different team than Wake Forest,” Meier said. “They are an aggressive team that won’t give you time to play calm basketball.”

Harden, who shot 9-of-15 from the floor, scored six points on 3-of-5 shooting to push Miami on a 10-0 run halfway through the first quarter. The former West Virginia transfer has posted double-digit second half scoring performances for three consecutive matchups.

Clemson guard Delicia Washington, the team’s leading scorer, averaged 15.7 points and 5.9 rebounds per game and scored 10 of her 14 points in the second half.

Similarly to its triumphant win on Thursday, Miami continued to battle in the fourth quarter after a “flat” third frame, according to Meier.

The Canes later connected on two-straight 3-point field goals at the four-minute mark of the fourth quarter, one each from Harden and Wyoming transfer guard Karla Erjavec. Those perimeter shots contributed to 26 total Canes points in the final 10 minutes, as Harden and Banks scored seven each to close the door late.

“It’s been a blessing to say we’ve been able to play all of our games without COVID issues on our team,” Banks said. “It’s truly a blessing to make it to the last regular season game.”

Heading into the ACC Tournament in Greensboro, N.C. with momentum, Miami looks to continue relying on the hot shooting of Harden who has now scored at least 20 points thrice in the last six games.

Miami earned the No. 10 seed in the ACC tournament and will face the No. 7 seeded Virginia Tech Hokies on Thursday, March 4 at 6 p.m.