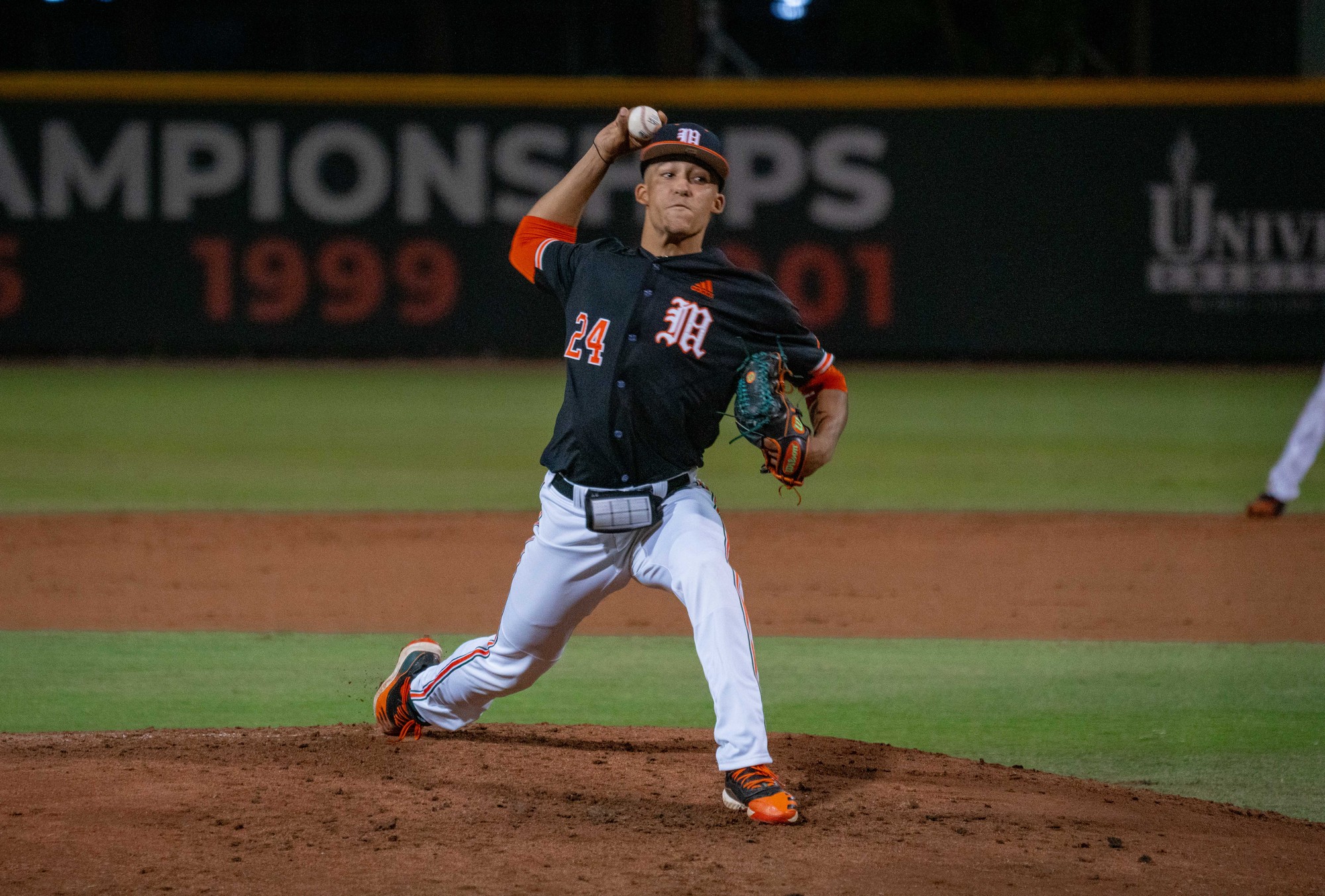 A night after being upset in their home opener, the Miami Hurricanes evened the weekend’s three-game series against the Virginia Tech Hokies on Saturday night at Mark Light Field.

No. 6 UM (3-2, 1-1 ACC) was fueled by Alejandro Rosario’s seven shutout innings on the mound Saturday. The freshman gave up just three hits and a walk while letting just a single runner reach scoring position. Rosario struck out seven Hokies while delivering 88 pitches. Dating back to his previous start, the local product has thrown 10 consecutive frames without a run allowed.

“Pitching set the tone. [Rosario] was outstanding,” Miami head coach Gino DiMare said. “This guy is just a phenomenal pitcher. [Virginia Tech’s] coach after the game said that’s the best arm he’s ever seen since he’s been in the ACC.”

“Any time you face adversity, you always want to come out on top,” Rosario said. “I feel like it makes you a better player…I felt completely comfortable, I felt like I’ve been doing this for a while. I just went out there and competed.”

Rosario’s outing took the pressure off the Miami bats, that were once again quiet after an early offensive flurry. The Canes batted .241 as a team and manufactured just two hits between the second and seventh innings.

“We’re still a work in progress with our lineup. It’s amazing, we came out, score three runs early, and then just kind of stagnant the rest of the game,” said DiMare.

Ben Wanger came in for relief of Rosario in the eighth, setting up closer Carson Palmquist to finish the game in the ninth. The bullpen allowed just two combined baserunners.

DiMare made some changes to the lineup card before Friday’s first pitch. Veterans and consistent starters Raymond Gil and Gabe Rivera were taken out of the lineup. Making their UM debuts were redshirt sophomore and Hillsborough Community College transfer Adam Frank at third base, as well as freshman Chad Born at the designated hitter spot.

Frank contributed immediately offensively. His first inning single scored Yohandy Morales from third base and Adrian Del Castillo from second. It made it 3-0 early after Morales drove in Jordan Lala from second to open the scoring. Morales and Del Castillo were the only Canes to notch more than one hit.

On getting the start, Frank said, “It definitely felt good. This team is very good, so I was lucky to start today. I was waiting for my opportunity, I came up in a big situation, and I was glad I was able to get the job done.”

But the Hurricanes didn’t score after the first inning. Hokies’ southpaw Chris Gerard played a part in that. Through six innings, Gerard struck out four UM batters while allowing two walks and six hits. Grant Umberger, Jaison Heard and Ryan Okuda finished the contest in relief for Virginia Tech, all without a run allowed. Fortunately for Miami, the three early runs were enough in spite of an overall inconsistent evening at the plate.

The two sides will square off Sunday at 1 p.m. for the rubber matchup. Freshman Victor Mederos will get his second start of the season after throwing for 4.2 innings last weekend at Florida.