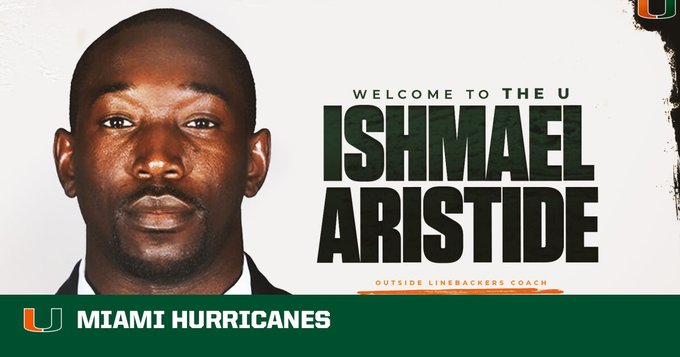 In an offseason filled with turnover for head coach Manny Diaz and the Miami Hurricanes defensive coaching staff, the Canes made another change this week, hiring Ishmael Aristide as the team’s new outside linebackers coach.

This move comes on the heels of newly hired linebackers coach Travis Williams leaving UM after just 17 days to join the University of Central Florida as their defensive coordinator.

“We’re excited to welcome Ishmael to the Hurricanes program,” Diaz said. “He is a sharp defensive mind and relentless recruiter who will be a great addition to our coaching staff.”

Aristide last worked at Texas A&M, where he served as a defensive analyst for the previous two seasons. The burgeoning defensive mind has previously worked at Ole Miss and Auburn, as well serving in a variety of roles on the defensive side of the ball.

Aristide, just 30 years old, is known as a rising star in the industry. He is expected to play a major role in recruitment, especially focusing on the South Florida area.

He played football and track at Purdue for three years from 2009-2011, earning academic All-American recognition.

In conjunction with Aristide’s arrival, previous outside linebackers coach Jonathan Patke will move to work with the ILB’s while also retaining his role on special teams. Exemplifying this offseason’s turnover, Patke is the only remaining member from last season’s defensive staff.