Home » Baseball commentary: The path forward is clearer, and the future looks a little brighter

Baseball commentary: The path forward is clearer, and the future looks a little brighter 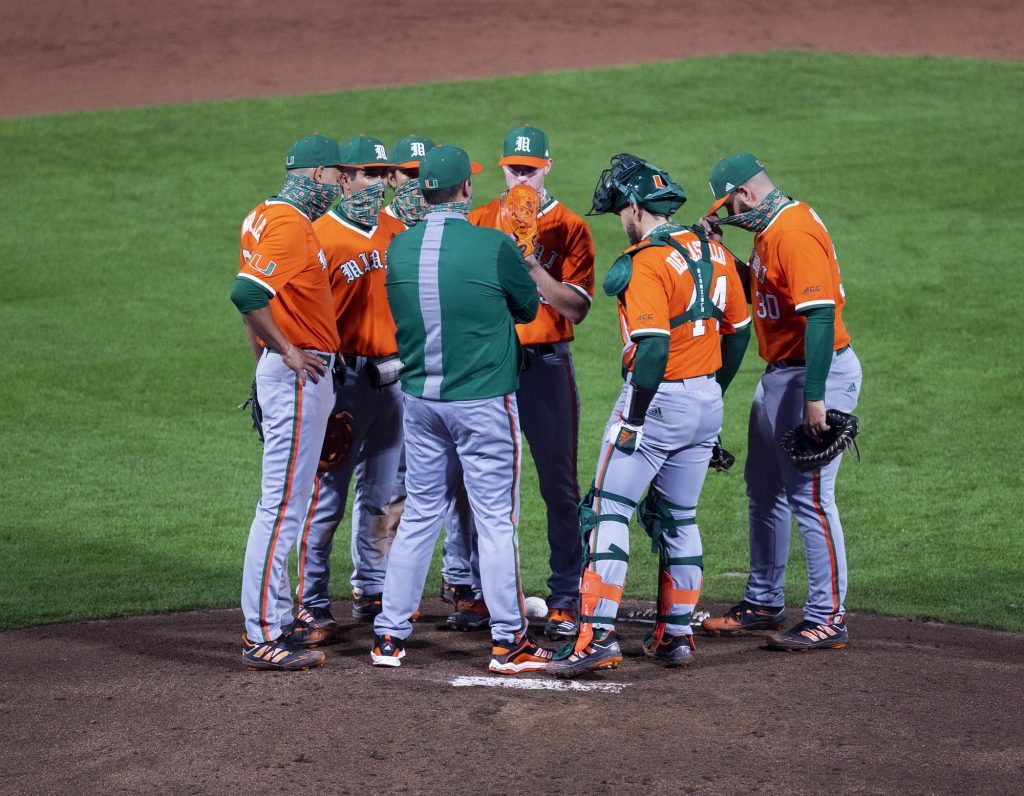 The Gators beat the Hurricanes 7-5 in Game 1 of their three game opening series at McKethan Field at the new Florida Ballpark in Gainesville, Florida on Friday, February 19, 2021. Photo credit: Cyndi Chambers/Correrspondent Gainesville Sun

They say baseball isn’t won through hero ball, but a number of unsung performances defined Miami’s triumph up north.

After the Hurricanes scored five unanswered runs in the seventh, eighth and ninth innings to tie Saturday’s game, Hurricanes relief pitcher Carson Palmquist threw three scoreless frames in the ninth, 10th and 11th before UM finally took Game 2 of the series in the 13th. Palmquist closed out the series Sunday with a Game 3 save, keeping the Gators off the board in the ninth inning of Miami’s 8-6 victory.

Two freshman pitchers were also thrown into the fire, with their first college starts coming this past weekend on the No. 1 team’s field. Alejandro Rosario overcame a two-earned run first inning to throw three scoreless innings, keeping the Canes in the game Saturday before eventually prevailing. Victor Mederos meanwhile leaned on early run support Sunday allowing just a single earned run while striking out five Gators in 4.2 innings pitched.

Newcomers played huge roles not just on the mound but at the plate. Seton Hall transfer Christian Del Castillo led UM with a .333 series batting average and six runs batted in while earning Atlantic Coast Conference player of the week honors. Freshman Yohandy Morales went 5-16 over the weekend with an RBI, and freshman Dominic Pitelli drove in the game-tying run in Saturday’s ninth-inning rally with a walk. Pitelli’s walk was just one of 25 free passes drawn by Miami in the series. If the Hurricanes can show that kind of plate patience all spring, they will be in great shape to make a very deep postseason run.

And while statistics like walks and sacrifice hits are great and UM will try to draw as many as possible in 2021, they won’t try to out-moneyball teams this season. This go big or go home program had been missing a lot of the “big” throughout the recent past.

Cumulative frustrations in the postseason and against rivals over the past decade have arguably overshadowed the successes the Hurricanes have had over the same timeframe. And that’s with the highs unquestionably outnumbering the lows in frequency. But the Canes took a big step forward at the top-ranked Gators, beating a proven, perennial contender in a road series. At least on the rivalry front, UM has now shown they can back up the annual preseason hype they receive.

Getting back to Omaha, making a run at the College World Series and winning it are the next steps. Head coach Gino DiMare said before the season that the national title will not be won at Florida in the opening series. The Hurricanes won the series, and they even earned a No. 1 ranking per Collegiate Baseball Newspaper. That doesn’t make them national champions in February. But the season’s foundation has been laid. Miami will expect to beat anyone placed in front of them, and it knows it can do exactly that.

The Hurricanes went up to Gainesville, Florida and handed the former No. 1 Gators their first home series loss to Miami since 2009, and in their brand new $65 million Florida Ballpark.

As remarkable as the team victories were, the individual performances of some players were even more impressive. A pair of freshmen starting pitchers, Alejandro Rosario and Victor Mederos, looked cool and collected in their performances on Saturday and Sunday respectively.

Rosario pitched four innings, surrendering five runs, two earned, on four hits. The righty struck out four batters and walked two. Understandably, Rosario’s command was shaky in the first inning, where he gave up all five runs, and a couple of fielding errors did not help his stats or his confidence. But he managed to settle in and pitched through the rest of the innings unscathed. His fastball topped 97 mph. The most impressive aspect of Rosario’s outing was his composure. At barely 19-years old, Rosario made his first start against the No. 1 team in the nation. Giving up five runs in the first inning would rattle anyone, but the fact that Rosario was able to hold himself together and finish out his day without giving up any more runs was incredibly impressive.

Mederos, another freshman who made his Miami debut on Sunday, pitched 4.2 innings, allowing seven hits, two runs (one earned), struck out five batters and walked one. His fastball topped 97 and he mixed in a very well developed changeup. Similar to Rosario, Mederos did not look like a 19-year old freshman. He did not give up a single run until the fourth inning and his poise was remarkable.

Although it was just their first outing, it was against one of the best teams in the country. The future of Canes baseball for at least the next two years looks promising with these two on the mound.

Offensively, the biggest surprise of the weekend was Christian Del Castillo, a transfer from Seton Hall and older brother to Adrian Del Castillo. I never thought I’d be talking about a Del Castillo that wasn’t Adrian, but “Delly,” as Christian is nicknamed, was named Co-ACC player of the week after going 4 for 12 (.333 BA) with six RBI and a double across the weekend. He had an OPS of .917 and drove in a run during Miami’s nail-biting win, 13-inning win on Saturday. Del Castillo provides a veteran presence to the lineup and will hopefully add to the offensive firepower that will become a normalcy for the Hurricanes as the season progresses.

The final two players that impressed me were bullpen pitchers Ben Wanger and Carson Palmquist. Wanger, a graduate transfer from USC in his sixth year of eligibility, closed out the 12th and 13th inning of Saturday night’s game, giving up one run in the bottom of the 13th, but collected the win nonetheless. He came in for one inning on Sunday and threw nine pitches without surrendering a run. Palmquist, a freshman who pitched for the Hurricanes last season as a true freshman, was absolutely instrumental in Saturday and Sunday’s wins. He pitched three innings in Saturday’s marathon of a game and did not give up a single run and on Sunday he came in for the final inning and went 1-2-3 to end the game. If Miami can rely on these two as the main closers, they should be in great hands.

Relief pitcher Franco Aleman remained incensed at the inconsistency of calls behind home plate, while Miami loaded up on walks and displayed its composure and next generation of firepower on the bump.

If Game 2 wasn’t the icing on the cake to turn heads of other college baseball powerhouses and experts, the rubber game articulated the Canes’ abilities to build a lead by dominating at the dish. Preseason All-American Adrian Del Castillo, a potential Top-3 MLB draft choice in June, at last spearheaded Miami’s offensive attack with two RBI in three at-bats.

His older brother, right-fielder Christian Del Castillo, a senior who hit a career-high five home runs and 35 RBI for Seton Hall in 2019, logged 3 RBI through nine at-bats in the second and third battles. The Miami native was able to make a strong debut in contributing to the team’s sparkling start to the season and will likely bring a productive bat to the Miami lineup as competition in the Atlantic Coast Conference unfolds this coming weekend.

Florida right fielder’s Sterlin Thompson lined out, which also culminated in Josh Rivera being doubled off at first base by Alex Toral, remaining an honorable mention for the play of the series besides that of Tony Jenkins’ grab in center field to shut the door on the weekend.

Starting pitching, a major question mark that gripped the coaching staff before last week, remained sharp for the majority of the 27 innings witnessed. Though Daniel Federman, who’s worked a carousel in different pitching roles during his tenure at UM, didn’t have his most memorable night having allowed four earned runs, he did strike out seven batters. That was enough to prove to Miami pitching coach JD Arteaga that he could eventually tighten the screws and mold into the rotation.

Freshmen starters Alejandro Rosario and Victor Mederos breathed new life to the Canes’ rotation that lost out what was likely the best trio of starters in team history in Brian Van Belle, Chris McMahon, and Slade Cecconi. Each Miami-bred pitcher threw at least four innings, giving up no greater than seven hits and two earned runs while wearing a Hurricanes uniform for the first time.

With this monumental series win for the first time since 2014, the Canes not only set the stage for what could be a potential 40-win season and one that may see a hosted regional at The Light. The team additionally established a sense of resiliency, having battled mightily to score five runs in Saturday’s final three innings, while holding their archrivals to only one from the seventh inning onwards as dusk drew in Gainesville, Florida.

Despite a handful of unforced errors seen across the infield in each game, nobody but DiMare and the team’s veterans can emphasize how serious the team’s mindset remained as the next episode of the Sunshine State baseball rivalry aired at the new Florida Ballpark this weekend.