Home » ‘One of the best hitters we’ve had here’: Adrian Del Castillo ready for best season yet

‘One of the best hitters we’ve had here’: Adrian Del Castillo ready for best season yet 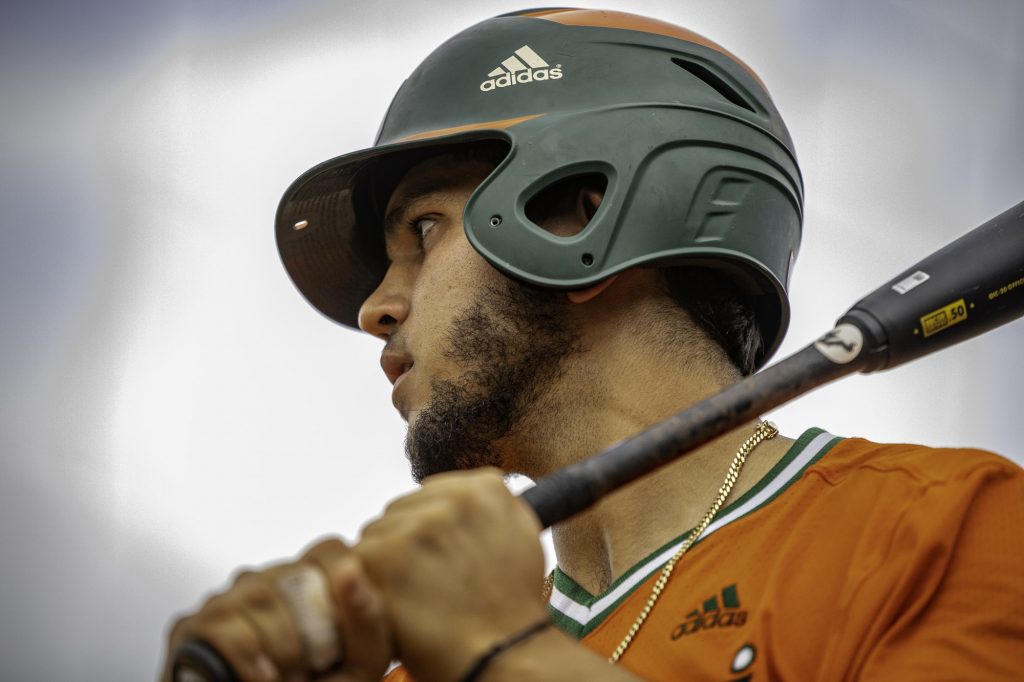 If you’ve watched almost any baseball game at Miami over the past two seasons, the chances of missing the hitting performances of catcher Adrian Del Castillo are likely slim to none.

The Miami native recorded .331 batting average and racked up 72 RBIs while starting all 62 games in just his freshman year alone. That lofty season led him to Freshman All-America honors in 2019, in addition to being slotted in the All-Starkville Regional Team despite Miami’s early NCAA Tournament defeat at the hands of Mississippi State.

2020 rolled around and Del Castillo’s story remained the same. The former Gulliver Prep standout hit a team-best .358 and tied nobody other than first baseman Alex Toral in runs scored at 13.

Yet, anticipated success at Mark Light Field in the 2021 season isn’t the only endeavor on the horizon for arguably the nation’s best hitter in college baseball, as Del Castillo remains high on the mock draft board for the 2021 Major League Baseball draft.

“We think Adrian Del Castillo is arguably one of the best hitters in the country, and he’s certainly one of the best hitters we’ve had here,” Miami head coach Gino DiMare said. “Just pure hitters that can hit the ball all over the place, and he hits with power, and he’s an RBI machine, and he’s a great, great guy to have in your lineup. Our whole thing is just trying to figure out who’s gonna hit in front of him that can knock him in, and we gotta have guys behind him that can protect him.”

Del Castillo’s high school coach, Manny Crespo, a former Freshman of the Year and two-time All-American at UM, tends to agree with DiMare’s assessment of his former player. 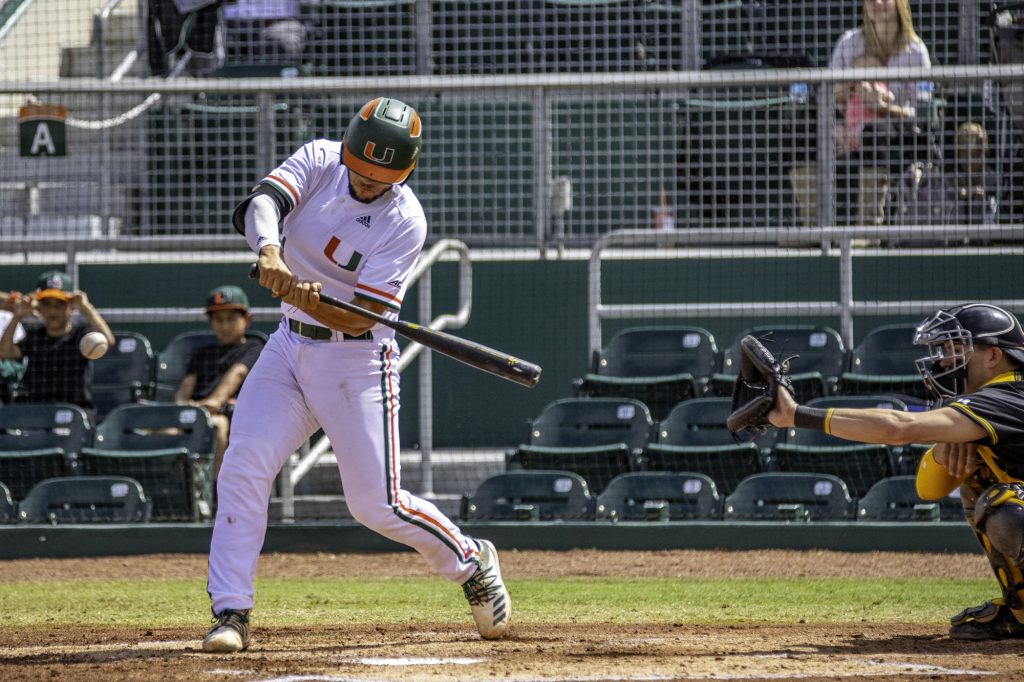 “You could just tell there was something a little different about the way he went about everything as far as his drive to succeed and his work ethic,” said Crespo, a five-year coach at Gulliver Prep who played for former Miami baseball coach Jim Morris in the late 1990s. “By the time his senior year came around, it was a whole different ball game. He was on another level of player that I hadn’t seen. Coaching USA Baseball, you see some pretty elite players, but this guy, because you see elite players, you get to see that he had something not very common when it’s just that consistent swing and that consistent approach at the plate.

Through his first two seasons at Miami, the power hitter logged 39 extra-base hits and 43 walks while only striking out 32 times. Entering his third season, however, Del Castillo worked hard in the offseason to improve behind the plate, having previously shuffled between catching, playing right field and being the team’s designated hitter.

“My key was just basically getting better at catching,” Del Castillo said. “Obviously, I can improve in any game, but I think catching I felt like I needed the most. Over the offseason I was able to work with Salvador Perez [Kansas City Royals catcher] and Pete Grifol [Royals bench coach], and they taught me a ton of things, and I listened very, very closely to what they told me, and I’m going to take it to my game. I was very fortunate to have them, thankfully, and helping me a lot to better up my catching back there.” 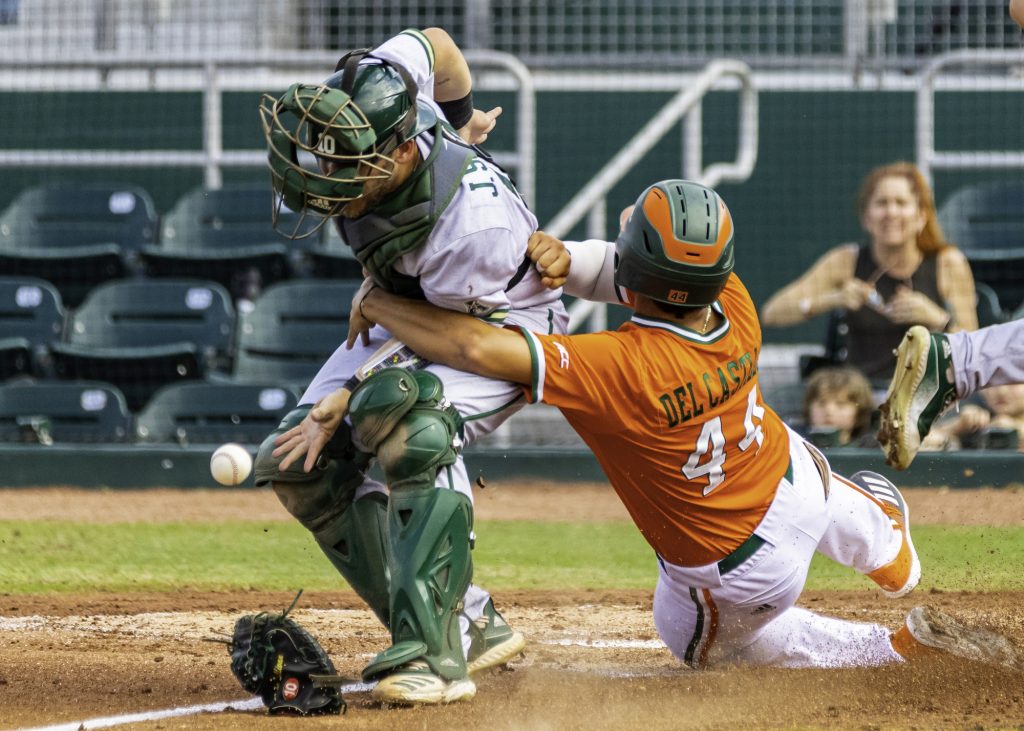 But Del Castillo did not stop in strengthening the sometimes-taxing physical demands of catching in one of the country’s deepest conferences. He also learned plenty when it came to honing in on the game’s mental component.

“He [Perez] was like ‘catching is mental.’ You catch 160 games up there [in the MLB] and here [college] you catch maybe only 50-ish, around there. You just gotta come out to play every single day, 110 percent. Even though your body’s not feeling it, but your mind’s gotta be at 110 percent and be ready to go,” Del Castillo said. “I learned a lot from him and also just communicating with the pitcher. He said that’s the most important thing, communicating with the pitcher. If they don’t like you, then they’re not gonna choose you to catch them, and they’re not gonna be comfortable with you, so that’s huge when he told me that.”

“I could say for myself I’m super excited,” Del Castillo said. “I haven’t played a game, or like an actual game in about a year almost. I just want to be out there, and I’m really happy we’re playing. I know they [the ACC] cut six games but I ain’t worried about that, I just thank God we’re playing in these crazy times, and [I want to] just go out there and have fun.”

But before Del Castillo and Miami fans can discover where one of the best hitting catchers in team history will take his talents, one of the tallest tasks in college baseball awaits Miami this weekend at the new Florida Ballpark in Gainesville, Florida.

“Our mentality is to definitely sweep them,” said Del Castillo on this year’s road series against No. 1 University of Florida. “Obviously they swept us here last year, and that was the worst feeling ever. I know the freshmen weren’t here; they don’t know. But the people that were here, it was a terrible feeling just going back inside the locker room and I just want to reverse that and hopefully we can do that this year.”

While the outcome of the annual Sunshine State showdown may remain up for grabs, along with the race for the ACC title, the Canes will look to thrive off of their incredibly gifted leader as Miami will look to its first hosted regional in over four years.