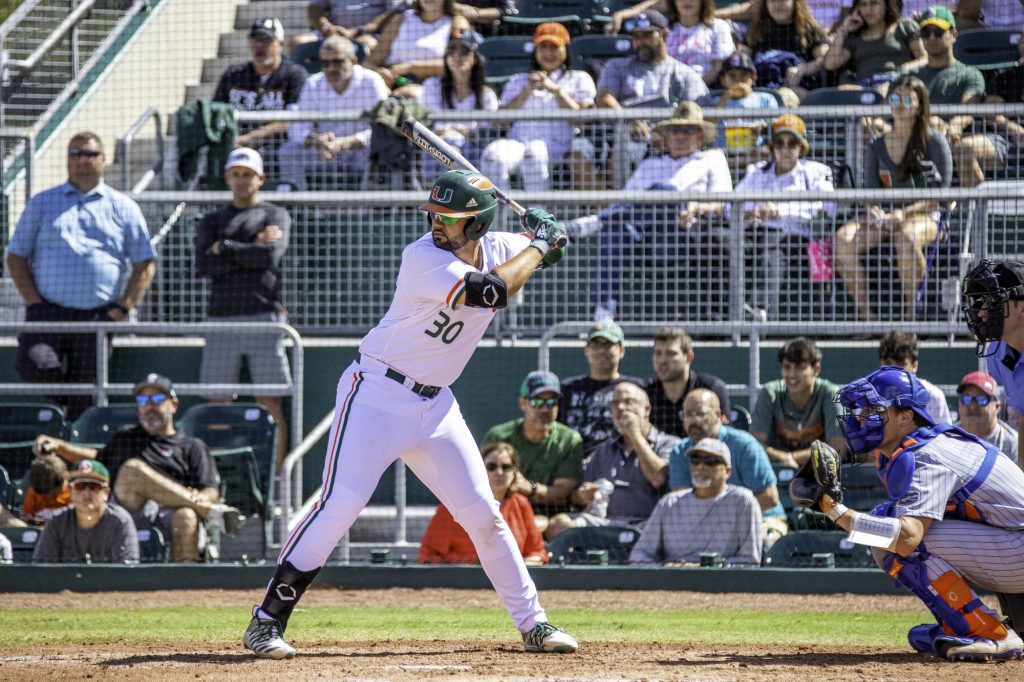 Miami will play a 36 ACC games this season, six more than what they would play during a normal year. Photo credit: Josh Halper

The Miami Hurricanes baseball team will play a 36-game ACC schedule this year, headlined by a mid-March visit from the Virginia Cavaliers and an end of season trip to the preseason ACC champions, the Louisville Cardinals.

The ACC schedule will feature six more conference games than previous seasons, and the Hurricanes will play a total of 12 three-game series, with those series being split evenly between home and on the road.

The Hurricanes are a consensus top 25 team and were voted to win the ACC Coastal Conference in the pre-season coaches poll.

Gino DiMare’s club will look to build on the team’s pre-pandemic success from last year, where they started off ACC play 3-0 and were ranked No. 7 in the country before the season was cancelled due to COVID-19.

The Hurricanes will open up their ACC schedule at Mark Light Field against the Virginia Tech Hokies, who come into town on Feb. 26.

Other key conference matchups for the Hurricanes include a series against rival Florida State University from March 19-21 at home and a road trip to North Carolina State on March 5-7.

It’s also customary in college baseball to hold plenty of games against non-ACC teams. Often times, the University of Miami will host northern clubs early looking to escape the late winter chill. In-state matchups are scattered throughout the schedule as well. But with the pandemic still underway and so much still in flux, most conferences, including the ACC, have beefed up in-conference play at the expense of many out-of-conference contests.

While the Hurricanes are not exclusively playing in-conference games, the number of non-ACC matchups in 2021 has decreased to just 14, compared to 26 non-conference meetings in prior years.

What remains of the non-league slate almost exclusively consists of in-state foes. And for the first time since 2014, Miami will not open the season with a series against Rutgers University at Mark Light Field.

“We’re going to probably have one of the more challenging seasons, not just with the COVID, but also our schedule,” said head coach DiMare. “Seeing that the ACC cut us six games, which took away some, midweek games, some out of conference games. We added six conference games to our season, so we’re playing everybody in our conference now except one team which will be Notre Dame. When you put that with playing Florida, and playing the midweek schools that we play, the out-of-conference [teams like] FAU, Florida Gulf Coast, FIU. It’s certainly going to be very challenging.”

The Hurricanes open the 2021 campaign with a three-game series against the University of Florida in Gainesville on Feb. 19-21. The Gators are the consensus national No. 1 coming into the season and are a season removed from sweeping UM in Coral Gables.

“That was the worst feeling ever,” said junior catcher Adrian Del Castillo on getting swept by UF. “I know the freshmen weren’t here. They don’t know, but you know the people that were here, it was a terrible feeling. Just going back inside the locker room, and I just want to reverse that, and hopefully we can do that this year.”

While there may not be as many midweek, non-conference games as in prior years, they are still dotted throughout the season. The first midweek contest is March 9 at home against Florida Atlantic University.

Miami will travel the next week to Fort Myers to face Florida Gulf Coast University on March 17. UM then heads up to Boca Raton on March 23 to see FAU again.

Florida International University will make the trek across Miami-Dade County into Coral Gables on March 31, while the Canes return the favor on April 7. Miami will have a pair of rematches against FGCU at home on April 14 and April 21, while FAU comes back to the Light on May 18.

UM’s sole out-of-state, non-ACC opponent is Appalachian State University, which comes to Miami for a three-game series from May 7-9.

The Miami Hurricanes full 2021 schedule is listed below:

April 30-May 2 at Boston College

May 7-9 vs. Appalachian State

‘One of the best hitters we’ve had here’: Adrian Del Castillo ready for best season yet
How to prepare for a funeral